The amendments to the Proceeds of Crime (Money Laundering) and Terrorist Financing Act, published in June 2016 in the Canada Gazette, are arguably the most important changes to the anti-money laundering regime in the past eight years, according to legal experts.

A substantive change that may prove to be a wake-up call for many Canadians is the expansion of current regulatory requirements that apply to foreign politically exposed persons (PEPs) to include domestic ones as well as the heads of international organizations, family members and close associates of these individuals. A politically exposed person is someone who held an office or was entrusted with a prominent public function such as a member of a legislature or even a judge. They are deemed to represent a greater money laundering risk because of the possibility that they abused their position. Just like foreign politically exposed persons, domestic PEPs too will come under greater scrutiny. Financial entities and securities dealers will now have to take reasonable measures to determine whether their clients in certain circumstances are “closely associated with” a domestic PEP. Reporting entities will now be compelled to make such determinations when for instance a client proposes to open a new account or make certain large unspecified transactions considered to be of higher risk like making lump sum payments of $100,000 or more.

Just before Christmas the Financial Transactions and Reports Analysis Centre of Canada (Fintrac) provided guidance that deals with politically exposed persons and heads of international organizations over terms such as “close associate,” “periodic basis,” and “reasonable measures.”

Close associates are individuals who are closely connected to a politically exposed person or a head of international organization for personal and business reasons. They could be business partners, romantic partners, persons serving on the same board or even persons carrying out charitable works with the PEP or head of an international organization.

Fintrac’s guidelines stipulate that reporting entities must have a process in place to assess whether existing accounting holders are politically exposed persons or heads of international organizations or close associates or family members on a “periodic basis.” But the guidelines do not specify what periodic basis means. That is something that each reporting entity will have to determine based on its own facts and situation, pointed out Ana Badour, a financial services lawyer with McCarthy Tétrault LLP.

Fintrac does however offer a bit more guidance over what it means by reasonable measures. It can include media monitoring, ongoing monitoring of business relationships, consulting public or private databases, or even asking the client. “A reporting entity must keep a record when the reasonable measure undertaken is unsuccessful, the measure taken, the date and record of why it was unsuccessful,” added Badour.

“A lot of people will have a bad taste in their mouth” when domestic PEPs realize that reporting entities will be scrutinizing their source of funds, said Matthew McGuire, a financial crimes risk-management expert.

Toronto corporate lawyer Peter Aziz disagrees. “When a reporting entity is found to be dealing with a foreign PEP, they are required under the regulations to treat the person as a high risk for money laundering,” explained Aziz, a partner with Torys LLP whose practice focuses on regulatory compliance in the financial services and payments industry. “Whereas for a domestic PEP, a reporting entity can use its discretion, that is, look at all the surrounding circumstances and exercise its discretion to determine whether the person should be considered high risk or not.”

Under Canadian anti-money legislation reporting entities have a series of obligations they must fulfil. They must identify customers, keep records of their customers and their transactions, ensure they have internal compliance procedures in place, and report transactions that are suspicious or transactions that meet certain conditions.

The amendments however replace existing client identification procedures with a new, more flexible regime that allows for a broader range of sources to establish the identity of a client. The new regulations identify specific types of sources, such as original government-issued photo identification documents, that can be used on a standalone basis because they are deemed to be sufficiently reliable. It also permits other types of sources but so long as it comes from two separate reliable sources used in combination. It could be a reliable source containing the client’s name and their address, the client’s name and birth date, or information containing the name of the client along with a confirmation that the individual has a deposit account, a credit card or a loan account with a Canadian financial entity.

Though the regulations offers greater flexibility in ascertaining client identification, it is far too prescriptive in nature and does not permit regulated entities to use innovative technological identity verification methods, asserted McGuire. Moreover documents used to establish the identity of a client under the dual process method must be an original or electronic copy but cannot be one that has been photocopied, faxed or digitally scanned, according to a Fintrac guideline that was published at the same time as the amendments were passed. “One of the centerpieces of the regulations was an effort to try to make it easier for companies in Canada that are subject to the Act to identify their clients – and it is a fail,” said McGuire. “It provides a whole bunch of options but then puts a whole ton of constraints on its possible uses. How does forbidding the use of photocopied, faxed or digitally scanned documents recognize the new realities?”

More reflective of today’s realities is the fact that the regulations expand the definition of signature to include any type of signature in electronic form that is created or adopted by a client and accepted by a reporting entity as being unique to that client. This is a positive development that will facilitate digital commerce, said Robert Dawkins, a Vancouver commercial litigator with Borden Gervais Ladner LLP. “The change for e-signatures creates a substantial amount of flexibility in dealings with clients non face-to-face,” said Dawkins. 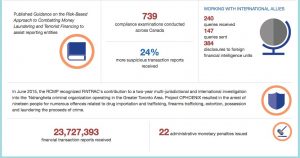 The new regulations are meant to address several key failings identified by the Financial Action Task Force (FATF), an international body established in 1989 that sets standards for anti-money laundering (AML) and anti-terrorist financing (ATF) activities, noted Dawkins. In 2008, FATF found that Canada, a founding member, was “non-compliant” on preventative measures such as customer identification and due diligence to combat money laundering. In a follow-up report in 2014, FATF “recognized” that Canada had made “significant progress” in addressing the deficiencies. In September 2016 FATF gave a lukewarm assessment, concluding that gaps still exist that leave Canada open to illegal financial activities even though its anti-money laundering efforts have improved in recent years. “One of the motivators for some of these changes were adverse comments when they were reviewed by FATF,” said Dawkins. “These regulations represent real changes.”

Though more changes to the regulations are expected in the future, McGuire said “there’s a whole bunch of stuff that we expected in this set of regulations that are not there.” The new regulations do not tackle pressing issues such as virtual currencies or prepaid cards which is “top of mind in almost of all the FATF meetings” because of the volume of terrorist financing involving prepaid cards, said McGuire. Nor does it tackle companies that lend money like mortgage firms and private lending companies, which are not governed by regulations, said McGuire. “It would have been strategic to answer all those gaps in a legislative package,” added McGuire.

Still in light of the recent propensity by Canada’s financial intelligence group to levy administrative monetary penalties, the new regulations should be taken “very seriously,” according to observers.

Fintrac, which was created in 2000 within the ambit of the money-laundering act, issued 16 monetary penalties in 2014-2015. In 2015–16 it issued 22 Notices of Violations. It also sent a strong message of deterrence after it fined last April an unnamed Canadian bank more than $1.1-million for failing to report a suspicious transaction and various money transfers.

“These are interesting times because we have seen an increase in the use of the regulator’s power to issue fines while at the same time we are moving more and more into a less prescriptive regulatory regime and more of a risk-based approach so there is more uncertainty there,” observed Dawkins. “A need for dialogue is needed between the regulator and reporting entities, and Fintrac needs to have a strong understanding of the business needs of the entities it is regulating because it’s difficult to assess the validity of a risk-based approach without that understanding.”