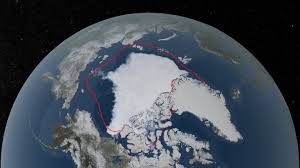 The Arctic Ocean, the smallest and shallowest of the world’s five oceans, is melting. Cursed by hostile weather and rough seas, the forbidding, remote and one of the least understood environments in the world is now beginning to open up under the weight of climate change. Navigation, not long ago unthinkable, is increasingly feasible. Large ships are beginning to explore the area in ways that Viking settlers and European merchants could only dream of.  Shrinking Arctic sea ice allowed last year a tanker carrying a cargo of liquefied natural gas to travel through the northern sea route for the first time without an icebreaker escort.

But commercial fishing is not feasible, not yet at least. With global warming providing easier access to its waters and expected to provoke future changes in fish stock migration, commercial fisheries may be tempted to search for potentially plentiful fishing grounds in the region historically blanketed by sea ice.

Major fishing nations want to forestall such ambitions. Following several years of talks, nine nations, including Canada, and the European Union signed a historic legally-binding agreement that would prohibit commercial fishing in the high seas of the Central Arctic Ocean as a precautionary measure for at least 16 years pending further scientific research on the fragile ecosystem and the development of a sustainable management regime that includes Inuit traditional knowledge. The deal can be extended in five-year increments, if the parties agree.

“Governments acted in a precautionary and very responsible way, looking towards the future, and it is therefore a reason for celebration,” says Michael Byers, Canada research chair in global politics and international law at the University of British Columbia. The agreement, added Byers, is important because it represents the application of the precautionary principle which holds that in a situation of scientific uncertainty actions that could cause serious harm should be avoided. In fact, the Agreement to Prevent Unregulated High Seas Fisheries in the Central Arctic Ocean marks the first time nations worked together to proactively protect the high seas before the start of commercial fishing.

The need to strike an agreement to protect 2.8 million square kilometres of the Central Arctic Ocean, the size of the Mediterranean, was not always present nor pressing. When the Arctic was icebound, it hardly mattered it was unregulated. In the absence of an international conservation and management regime, fishing in the high seas area of the Central Arctic Ocean was legal and unregulated, not that there was any fishing taking place.

The region, governed by the 1982 United Nations Convention on the Law of the Sea (UNCLOS) and the 1995 UN Fish Stocks Agreement (UNFSA), is known as a global commons, an international, borderless area whose natural resources can be exploited by any country.

“The only jurisdiction that is exclusive in the high seas is essentially the flag state,” explains Aldo Chircop, Canada research chair in maritime law and policy at Dalhousie University. “Any states that have ships in the area, registered under its flag, has exclusive jurisdiction of its ships only, and nothing else.”

But with the Arctic warming at almost three times the global average rate, opening up to 40 per cent of the region during summer months, environmental groups, policymakers and researchers became alarmed. Pressure began mounting to protect the fragile ecosystem and avert a repeat of the disaster that struck the pollock population after overfishing in the international waters in the Bering Sea. Scientists led the charge in 2012, with some 2,000 calling for a moratorium, a petition that led to a 2015 voluntary moratorium on trawling in Arctic waters by the five coastline states, which in turn eventually led to the landmark legally-binding Central Arctic Ocean agreement.

But “we all recognized that we needed to bring in and invite other (fishing) countries to this agreement or else our goals would not be achieved to prevent unregulated, unsustainable fishing on the high seas” of the Central Arctic Ocean, says Nadia Bouffard, Canada’s chief negotiator of the talks.

The agreement however comes at a low cost for the ten signatories, and they stand much to gain. An effort to ban all fishing and turn a huge tract of the Antarctic ocean into the world’s biggest sanctuary was rejected in the fall of 2018, underscoring the opposition that can form when seeking to prohibit a commercial activity already underway.

That is not the case with the Central Arctic Ocean. There is no commercial fishery that exists in the Central Arctic Ocean “so there was no question here of stopping activity,” points out Byers. In exchange for signing the agreement, the Arctic Five (Canada, Norway, Russia, the U.S. and Denmark-Greenland) are seeking to ensure that “no high seas fishing would undermine the security of natural resources under their jurisdiction,” said David Balton, former U.S. ambassador for oceans and fisheries. The other five signatories (China, Japan, South Korea, Iceland and the European Union) were looking to the future, anticipating that there will potentially be a commercial fishery someday, and by signing the agreement now “it guarantees them a seat at the table” when a new agreement may be negotiated that could authorize commercial fishing on a sustainable basis. Moreover, the three Asian states and the EU “welcomed the opportunity” to participate in an international agreement about the Arctic on an equal footing with Arctic nations.

The ten signatories are not the only ones who stand to gain. The Inuit, who were part of the Canadian negotiating team, too will no doubt benefit. Indeed, Inuit from Canada, Greenland, the Russian region of Chukotka and Alaska represented by the Inuit Circumpolar Council are also part of the agreement – and contributed to a number of provisions included in the agreement, says Bouffard.

Unlike the UN Convention of the Law of the Sea, which does not recognize the role that indigenous people play in ocean management, the Central Arctic Ocean agreement goes out of its way to bring them in, notes Robin Campbell, a Montreal lawyer with Hutchins Legal Inc. who practices Aboriginal and environmental law. “The Convention has been a problem for indigenous peoples because without that explicit protection, they are constantly having to assert rights that aren’t necessarily expressly recognized in that Convention,” says Campbell. The new agreement instead “opens the door” for indigenous peoples, she added.

That’s because the preamble to the agreement refers to the 2007 U.N. Declaration on the Rights of Indigenous Peoples (UNDRIP). It also plainly stipulates that it recognizes the interests of Arctic residents, including Arctic indigenous peoples, in the long-term conservation and sustainable use of living marine resources. And it explicitly states that indigenous and local knowledge is expected to supplement scientific knowledge. “This is the backyard of the Arctic Inuit,” says Bouffard. “There is a link between what’s on their coast and what’s on the high seas. They want to make sure that we have a sustainable regime so their interest and their rights could be affected if we didn’t take care of that environment in a sustainable way.”

There is a growing intersection between international environmental law, UNCLOS and international indigenous law, says Chircop. Where it will lead no one knows. But Chircop argues that the duty of all states to protect and preserve the marine environment (Article 192 of UNCLOS) is “nourished” by a corpus of international law on the environment. It is therefore arguable, Chircop maintains, that the duty of states to respect the environmental and resource rights of indigenous peoples also “nourishes” Article 192. “One can argue that the future management and conservation of Arctic fisheries should respect the rights of indigenous peoples that might be dependent on species affected by fishing,” says Chircop.

In the meantime much work needs to be done on the Central Arctic Ocean agreement. The groundwork for a joint scientific research and monitoring program has yet to be developed. There is also work to be done on outlining protocols for data sharing as well as exploratory and scientific fishing – a potential sticky point given that under the guise of exploratory or scientific fishing some nations have actually undertaken full-blown commercial fishing, says Bouffard. But most importantly, the agreement has to be ratified by all ten signatories, and that may take a while, admits Bouffard. Until then, the agreement is not in force and nor is the 16-year fishing moratorium in the Central Arctic Ocean.

An amended version of this story appeared in the National magazine, published by the Canadian Bar Association.