When the Ontario Securities Commission slapped four company officials from Canada’s high-tech superstar, Research in Motion Ltd., with a $77-million fine in penalties and restitution, it was one of the few cases, if not the only case, where provincial securities regulators levied a sanction against executives for backdating stock options.

In the United States, 55 individuals and 17 companies currently face SEC scrutiny over options backdating. The penalties and settlements vary greatly. In the first stock-option backdating case to reach trial, Brocade Communications CEO Gregory Reyes was sentenced to 21 months in jail, two years’ probation and fined US$15-million for 10 counts of securities fraud in 2007. 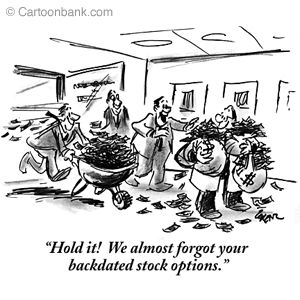 Here’s how a corporate lawyer and a former chair of a Bay Street law firm’s partnership board explained it to me recently:

“Backdating has occurred – Research in Motion is an example – but it doesn’t tend to be a big issue in this country. Backdating destroys the equivalent of capital gains treatment and basically doubles your tax. So for those companies stupid enough to backdate not only inevitably do they seem to get caught, witness Research in Motion, but more importantly, Canadian resident employees subject to the Canadian Income Tax Act, end up with far more adverse tax treatment due to backdating than would be the case if they had the options priced at a conventional basis at market when the share were issued.

Let me give you an example. If you are an employee of a public company and that company gives you options for 10,000 shares and the market price today is $5.00 per share, you can exercise these options at $5.00. If the shares go up to $8.00, and you decide to exercise your options and cash in your $3.00 profit, under our tax regime that $3.00 profit is taxed as if it were equivalent to a capital gain. The tax gain on that is roughly 23 per cent.

What happens under our tax regime is when you go to cash in those options at $8.00, the $4.00 profit is now taxed as ordinary income and you don’t get the capital gains treatment or its equivalent. Therefore you go from paying 23 per cent tax on your gain to paying 46 per cent on your gain.”

Something else to consider about backdating stock options. According to Alan Ellman of Labaton Sucharow LLP, “unlike the typical securities fraud scenario, options backdating places the general counsels at the center of the fraudulent conduct.”

The general counsel is essential to the creation of the stock options award plan; explains the rules of the plan to management; prepares stock option grant documents, such as unanimous written consents, which directors use to formally approve option grants; files forms with the U.S. Securities and Exchange Commission acknowledging the grants; and signs proxy statements which generally state that options are granted at the fair market value of the stock on the date of grant.

It is difficult to imagine the perpetration of a backdating scheme without the complicity—or at the very least dereliction of fiduciary duty—of a company’s general counsel.

In addition to manipulating the documentation of stock option grants (the sine qua non of backdating), these general counsels often directly profited from the fraud through their own receipt of back-dated options.