The federal government issued an Order in Council that suspends the controversial implementation of the private right of action under Canada’s Anti-Spam legislation (CASL) until the completion of a parliamentary review due to “broad-based concerns” raised by businesses, charities and the not-for-profit sector.

“Canadians deserve to be protected from spam and other electronic threats so that they can have confidence in digital technology,” said Navdeep Bains, Minister of Innovation, Science and Economic Development in a press release. “At the same time, businesses, charities and other non-profit groups should have reasonable ways to communicate electronically with Canadians. We have listened to the concerns of stakeholders and are committed to striking the right balance.” 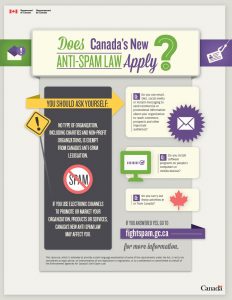 The right of private action under CASL, originally scheduled to come into force on July 1, 2017, was the final piece of the puzzle. It would have allowed any individual or organization to take legal action against any company which sent them an email they did not want to receive, without proof of damages. It also would have opened the door to statutory (non-compensation) damages of up to $200 for each contravention and a staggering $1 million for each day on which the contravention occurred.

Under section 51(2) of the CASL, the awards of statutory damages were intended “not as punishment” but rather to enforce compliance, points out Gillian Stacey and Andrea Burke of Davies Ward Phillips & Vineberg LLP. “So it is an interesting question whether the private right of action and statutory damages will promote compliance by  providing a greater incentive for defendants to enter into undertakings with the regulators or will prove to be a big boot to allow the class action bar to kick defendants and take the regulatory burden off the regulators,” they said.

Canadian business were not overly concerned with individual suits. It was the class actions, seeking large statutory damages that had them worried. “I have met with a couple of the plaintiff class actions firms who are counting the number of sleeps until July 1,” said Peter Clausi, executive vice president, corporate affairs, and general counsel at GTA Resources and Mining Inc. at a recent panel during the Canadian Corporate Counsel Association’s national conference.

The Canadian Chamber of Commerce said it is “celebrating” the federal government’s decision to suspend the coming of force of the private right action provision. The business lobby group asserts that the private right of action provision would have “exposed” business to “potentially unjust” and costly litigation. “This is a big win for all Canadians,” according to Perrin Beatty, president and CEO of the Chamber. “Businesses rely on their capacity to communicate with their clients, and some of these measures would have limited their capacity to do this. Additionally, this provision would cost Canadians heavily in productivity and mischievous litigation.”

Legal experts too applaud the federal government’s decision. “This gives Canadian business, government and consumers the chance to take a breath and figure out whether this dumpster fire of a law is the right tool for the job,” said privacy expert David Fraser of McInnes Cooper. Another privacy expert, Eloïse Gratton of Borden Ladner Gervais, said the postponement is “good news” because organizations will not be at risk for lawsuits for CASL violations.

Barry Sookman, a senior partner with McCarthy Tétrault LLP and the former co-chair of the firm’s technology law group, also applauds the federal government’s move, maintaining that it is good policy to recognize when a law is misguided and good governance to take “appropriate steps” to rectify it. He says that an anti-spam law shouldn’t treat all Canadians as spammers and malware purveyors. “You should instantly sense something is wrong with a law if it could make kids promoting lemonade stands to their neighbors or trying to get a babysitting job, or a person recommending a dentist to an acquaintance, illegal,” said Sookman. 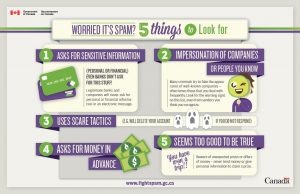 Under CASL, the Canadian Radio-television and Telecommunications Commission (CRTC), the Competition Bureau and the Office of the Privacy Commissioner of Canada have enforcement responsibility. They can impose harsh administrative monetary penalties. Since CASL came into force, the CRTC has imposed penalties ranging from $15,000 to $1.1 million.