A man who discovered that he was not the biological father of a child lost his bid before the Quebec Court of Appeal to strike his name off the child’s certificate and invalidate his bond of filation with the child.

The Rimouski businessman, who had a seven-year common-law relationship that lasted between December 1998 and June 2005, discovered from acquaintances, shortly after being separated, that it was unlikely he was the father of the child born in 2002. On January 2007, a DNA test concluded that, with a probability greater than 99.99 per cent, that he was not the biological father of the child.

The businessman, who obtained visitation rights after the separation, immediately cut all links with the child. That’s when he also sought to sever all legal bonds with the child.

In a unanimous 18-page ruling in Droit de la famille — 09358, 2009 QCCA 332, the appeal court dismissed the businessman’s arguments. The court noted that under s. 523 of the Quebec Civil Code, “paternal filiation and maternal filiation are proved by the act of birth, regardless of the circumstances of the child’s birth.” Further under s.524, “uninterrupted possession of status is established by an adequate combination of facts which indicate the relationship of filiation between the child and the persons of whom he is said to be born.”

The notion of “possession of status” is fulfilled when three conditions are met: the child bears his name, the child was educated by those who were designated as his father and mother, and that he was recognized in his entourage as being the parent of the child. 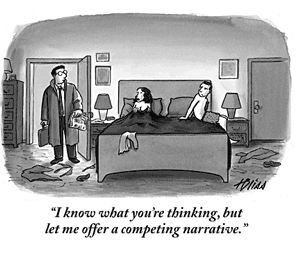 The court held that the businessman met all three conditions. The child bears his name, the man always – until he found out he was not the biological father — treated the child as his own, and everyone around him saw him as the father of the child

“The appellant is asking to dismiss the time he was in possession of status,” wrote Judge Benoît Morin.

He also notes that s.530 of the Civil Code is unequivocal and leaves little room for interpretation. Citing a previous ruling, he points out that someone who has “possession of status” proved by the act of birth has an unassailable bond of filiation. According to s.530, “no person may claim a filiation contrary to that assigned to him by his act of birth and the possession of status consistent with that act.”