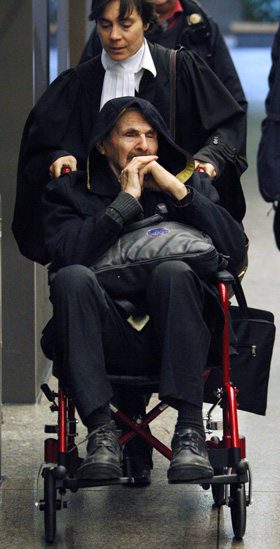 A 93-year old man who sexually abused his daughters nearly fifty years go was condemned to two years less a day to be served in the community due to his advanced age and health problems.

Philippe Hamelin, convicted on a number of charges, including incest, sexual molestation and assault causing bodily harm for incidents that took place between 1956 and 1963, is now deaf and nearly blind, has skin cancer and suffers from a disease akin to Alzheimer’s.

The Crown was seeking a prison sentence of between seven and nine years while Hamelin’s lawyer had asked for two years less a day in the community.

“Mr. Hamelin might very well have been given that seven-year sentence if the decision needed to have been made during the decades that followed the crimes, even if he were old and had certain health problems,” Justice Perreault, noting that the convicted molester was unrepentant. “Only the exceptional circumstances I have described regarding Mr. Hamelin’s current health lead me to stray so far, and for humanitarian reasons, from imposing a normal sentence.”

Dealing with the elderly is a thorny issue that the justice system must grapple with, sooner or later. In Canada, older offenders account for 13% of the offender population. A 2004 report by the U.S. National Institute of Corrections found that the number of state and federal prisoners ages 50 or older rose 172 percent between 1992 and 2001.

The Correctional Service of Canada noted that “the combination of the physical health problems and the type of health care available at the prison often requires that the older offender be transferred to community medical facilities” – an expensive endeavour.

Another report concludes: “The incarceration of older prisoners, who represent the smallest threat to public safety but the largest cost to taxpayers to imprison, exemplifies failed public policy that favours imprisonment over more cost-effective alternatives.”

England too is wrestling with the issue. Anne Owers, Her Majesty’s Chief Inspector of Prisons since 2001, examined the issue of older prisoners in England and Wales in a comprehensive 126-page report and concluded that “the prison system in general is ill-equipped to meet their needs and its responsibilities.” The prison watchdog recently lamented that little has changed since the report was published four years ago.