The federal government has been given 18 months to correct discriminatory provisions in the Indian Act that infringe the Charter of Rights and Freedoms after a Quebec judge held that generations of indigenous women have suffered discrimination based on gender.

Despite several amendments to the Indian Act, the latest in 2010 in response to a ruling by the Court of Appeal for British Columbia, Quebec Superior Justice Chantal Masse found that it still discriminated against women and their descendants on the issue of registration or “Indian status.” The federal government has until January 2017 to amend the discriminatory provisions before they are declared invalid as an unjustifiable breach of the right to equality guaranteed by section 15 of the Charter.

Justice Masse underlined that even if her judgment only concerned the two cases before her “it does not exempt Parliament from taking the appropriate measures to identify and settle all the other discriminatory situations that could arise from the issues identified, whether based on sex or other prohibited grounds, in conformity with Parliament’s constitutional obligation to ensure that its laws respect the rights enshrined in the Canadian Charter.” She warned that when the “legislator chooses to fail to consider the broader implications of decisions by the courts by restricting its reach to a strict minimum, a certain abdication of legislative power into the hands of the courts risks taking place.”

The strong language used by Justice Masse is a clear indication of the courts’ growing frustration with Parliament’s inability to deal with the situation once and for all, said Geneviève Motard, a law professor at the Université Laval. “She is sending a very strong message to the legislator that it should not interpret the ruling in a very restrictive manner but should really eliminate all of the discriminatory provisions that stem from the Indian Act,” explained Motard, who teaches aboriginal law.

This ruling marks the third time that the issue of gender discrimination provisions in the Indian Act has been the subject of legal debate. Before 1985, Indian women lost their status if they married men without Indian status, and their children had no right to be registered as Indians. Indian men, however, kept their status if they married non-Indian women – and gave status to their wives and children. In 1977, Senator Sandra Lovelace successfully petitioned the United Nations Human Rights Committee, which found in 1981 Canada in breach of the International Covenant on Civil and Political Rights. That prompted Canada to introduce Bill C-31 or a Bill to Amend the Indian Act, in 1985 which gave Indian status back to women who had lost it and gave status to their children.

The 1985 amendments also created new registration rules, without regard to gender. It introduced two classes of Indians: under Section 6(1) those who can pass Indian status to their children if both parents have that status, and under Section 6(2) those who have Indian status if one of the parents are Indian under 6(1). An Indian under 6(2), however, cannot alone transmit his or her Indian status to their children. In other words, in order to be Indian, you must have two Indian grandparents. Or as law professor Sébastien Grammond points out Indian status is lost after two generations of marriages with non-Indians, something that has become known as the “second generation cut-off rule.” 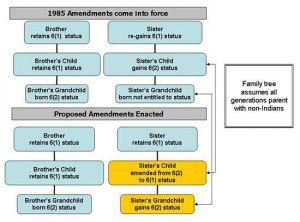 Six years ago, the B.C. Court of Appeal ruled in McIvor v. Canada that the registration rules under the Indian Act discriminated against some Indian women who had lost their status. The federal government, rather than appeal to the Supreme Court of Canada, amended the registration rules in 2010 in order to give status to grandchildren born after 1951. But the new registration rules only put an end to discrimination “in the case of individuals whose situation was exactly identical” to that of Ms. McIvor’s grandchildren, noted Justice Masse in a very technical and complex 60-page ruling in Descheneaux v. Canada 2015 QCCS 3555. It did not eliminate the discrimination between women or those who trace their aboriginal descent through the maternal line, and men or those who trace their aboriginal line though their paternal line. Before 1985, sons born outside marriage to Indian men and non-Indian women were entitled to be registered as Indians. But not the daughters. The 1985 amendments gave daughters the right to be registered but only as the child of a single Indian parent. That meant that the daughters did not have the right to pass on the status unless they were in a relationship with a man registered as an Indian.

“The litigation surrounding McIver and Descheneaux stems from the transition from a patrilineal system to this now ancestry sort of based system or what the Americans call a blood quantum system,” remarked Schulze, who successfully plead the case. “You can dress it up any number of ways but it’s roughly that. So you have situations where children from the same parents have a different status because some are boys and some are girls. And the government has known about this for 30 years. They were told by a parliamentary committee in 1990 that it should be corrected, and they just did nothing about it. “

The consequences for some Aboriginal communities could potentially be devastating, particularly for those with high rates of inter-marriage such as the Abénakis of Odanak and Wôlinak, two communities of the same nation with more than 3,000 members on two small reserves in southern Quebec who launched the Descheneaux suit. According to a demographic expert witness, the number of Abénaki individuals registered will drop by half within 50 years under the current rules. Within 100 years, there will no longer be any Abénaki descendants eligible for Indian registration.

“It certainly is a victory for the plaintiffs but it does not address the larger issue of the second generation cut-off rule,” said Grammond, an aboriginal law expert and former dean of the civil law section at the University of Ottawa. “Nor does the ruling address the racial aspect in the discrimination at play here, which is at the very heart of the Indian Act because in 1951 when they reviewed the Indian Act they made the decision that having one-quarter Indian blood is not enough. This part of the old Indian Act has never been seriously challenged. In 1985, when they responded to the presence of sex discrimination, they carried out that over in a gender-neutral fashion. But you still need to have two Indian grandparents to have Indian status.”

In the meantime, Schulze and other legal experts hope that the federal government will pay heed to Justice Masse’s challenge to take a broad view and “identify the underlying issues the courts raise and address them in one go because there is a cost to individuals and to communities.”