Federal and provincial governments “need” to demonstrate a “stronger engagement” towards conducting meaningful consultations with indigenous communities, according to a United Nations working group on business and human rights.

The duty to consult takes on added weight given that extensive mining and oil and gas extraction in several indigenous territories is “accompanied” by significant adverse environment impacts that affect the right to health, added the UN panel.

“Both the Government and businesses should appreciate that unlike other people, indigenous communities share a unique relation with their land, a fact that should be kept in mind while engaging them to obtain ‘free prior and informed consent,'” said the panel.

The rules around the Crown’s duty to consult has evolved over the years. In a series of decisions since 2004, the Supreme Court of Canada has broadly established that the Crown has a legal duty to consult with indigenous peoples when planning an action that could have an adverse impact on indigenous or treaty rights. In these cases, indigenous peoples have a right to be heard, and where appropriate, accommodated. But while the duty rests with the Crown, in practice some provinces have delegated the duty to consult to business, with limited government oversight.

“We observed that there was often a lack of trust about whether consultations were carried in good faith,” said the UN panel in a statement that outlined its concerns and recommendations following a ten-day visit to Canada. Its official report to the 38th session of the Human Rights Council in June 2108 will include further observations and recommendations.

The lack of meaningful consultation and accommodation has led to many legal battles over the past decade. And even though indigenous communities have won such cases after a “long and expensive battle,” the UN panel signals its dissatisfaction with the outcomes, pointing out that “the court rulings often merely serve as guidance to Government authorities to ‘correct the course’ for future consultation processes.”

The UN working group also expressed concerns over the manner in which consultations are carried out. Initial mineral exploration can be carried out and claims staked on indigenous land without prior notification. Indeed in some provinces companies are only required to notify when heavy machinery is used for mineral exploration. In most provinces “actual consultation” becomes mandatory when companies are seeking permission to begin extraction.

“When consultations only start at a stage when significant investments have already been made, these tend to be a ‘check-box’ exercise rather than genuinely seeking to obtain the informed consent of affected communities,” said the UN panel.

That is a verdict that Montreal lawyer Charlotte Chicoine-Wilson agrees with. She points out that despite the fact that the duty to consult indigenous peoples is enshrined in both domestic and international law, there is a tendency in practice to reduce the duty to a “procedural checklist,” empty of substantive obligations.

First Nations “very often” receive a standard consultation letter informing them of a project that gives them 30 days to respond with their comments, no matter what the project and its impacts on indigenous rights, said Chicoine-Wilson, a lawyer at Dionne Schulze LLP. This approach, added Chicoine-Wilson, runs contrary to the “clear teachings” of the nation’s highest court.

“Engaging in meaningful consultation would at least require government to offer sufficient time and resources to First Nations for them to be able to properly analyze and comment on a project, which the standard-letter approach does not even start to do,” Chicoine-Wilson whose practice focuses on claim files, Indian status litigation and questions related to the Crown’s duty to consult and accommodate First Nations. 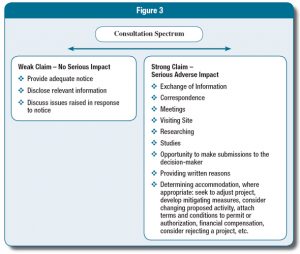 In this vein, the UN panel urges the government to “facilitate” meaningful consultation processes which consider impact assessments of projects in a “cumulative, independent, gender-sensitive and holistic manner.” The UN panel, like Chicoine-Wilson, recommends providing resources to indigenous communities so that they can “better understand” the implications that proposed projects may have on their way of life. Consultations should also be conducted widely with communities, and not merely with chiefs and band councils.

The issue of duty to consult will once again be examined by the Supreme Court. This time, in Courtoreille v. Governor General in Council, it will examine whether the duty to consult extends to the legislative process, a question that in many ways strikes at the heart of Canada’s governance system.

This is part two of a three-part series.

Part one: UN Working Group calls on Canada to do more to address human rights abroad