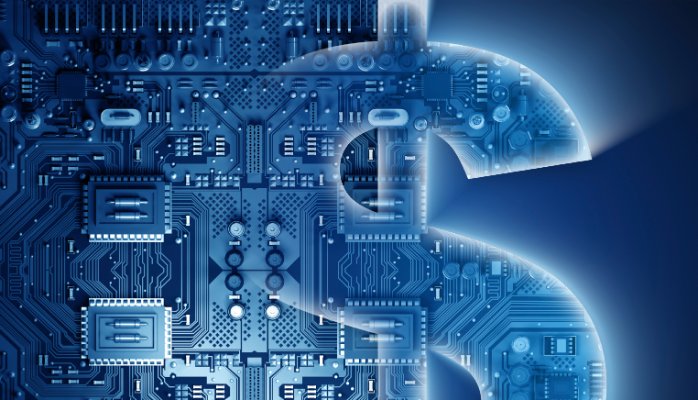 Fintech adoption in Canada has doubled over the past two years but it still lags behind most of the world in adopting services from online financial providers.

Fintechs are a catchphrase for new innovative financial technology start-ups and major technology companies that are challenging traditional financial institutions on their turf by offering cheaper and easier-to-use Internet or smartphone based services like payment apps or peer-to-peer lending or digital currencies.

In Canada, only 18 per cent of survey respondents have used two or more fintech services in the last six months, compared to 33 per cent globally, according to Ernst & Young LLP’s 2017 FinTech Adoption index. 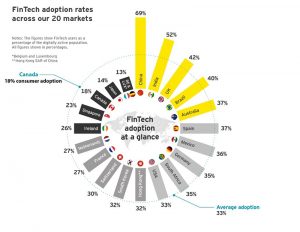 China has the highest adoption rate at 60 per cent, followed by India (52 per cent) because fintech firms there “excel at tapping into the tech-literate, but financially underserved population, of which there are particularly high ratios in emerging countries.”

In Canada, the portrait is slightly different. In short, Canadians haven’t used a fintech because they likely don’t know of any, according to the study. Twenty-two per cent of respondents reported they had not heard of any fintech. That remains however a significant improvement over two years ago when nearly one in two Canadians professed ignorance about fintechs.

But there are other reasons why Canadians have not taken to fintechs like elsewhere.

Canadians are risk-averse. They prefer to use traditional banking.

And then there’s the fact that Canadians were largely spared by the 2008 financial crisis. “In other countries, consumers – due to the financial crisis – were not happy with their traditional financial players, and therefore an opportunity opened up for these fintech companies to offer products that satisfied consumers,” Ron Stokes, EY Canada’s fintech leader, told The Globe and Mail.

Those insights echo those made last year by Ana Badour, a Toronto financial services lawyer with McCarthy Tétrault LLP banks, in a story I wrote about fintechs. “As a result from pressures from the financial crisis, there was more of an impetus to innovate in some jurisdictions,” says Badour. “Our financial institutions fared well so there was less direct pressure to innovate outside of the institution.”

But Canada’s Big Six banks, though on solid ground, are paying heed to fintechs.

“Because of the strength of the banking sector in Canada, we’re seeing a lot of partnerships between banks and FinTechs,” said Stokes. “Banks are looking for faster and easier ways to boost their digital capabilities, both on the consumer side and in the back office. At the same time, Canada’s FinTechs need access to more customers and resources to improve their offerings.” 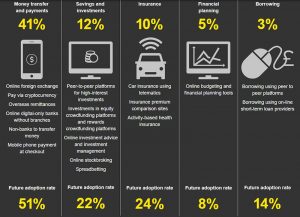 Adoption rates however differ across different fintech categories or sectors. Money transfer and payments services were, and continue to be, the most popular fintech service, growing from 18 per cent in 2015 to 50 per cent in 2017. Insurance has made great strides, moving from being the least commonly used service in 2015 to the second most popular service this year, largely due to the inclusion of insurance premium comparison services.

Adoption rates too differ depending on demographics. Those mostly likely to use fintech are 25- to 34-year-old consumers, followed by 35- to 44-year-olds, and declines with consumers aged 45 years and older.

The future looks bright for fintechs. The EY study suggests that fintech adoption could increase to an average of 52% globally, particularly among consumers in South Africa, Mexico and Singapore.