Barely a couple of weeks after the former president of the Quebec legal society reluctantly resigned after a bitter and protracted fracas with the board of directors of the Barreau du Québec, Lu Chan Khuong is fighting back while raising the possibility that she may yet come back to seek another term if her electoral platform is not fulfilled by the new president. 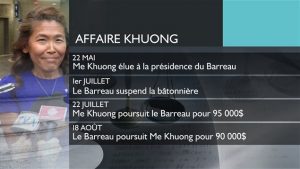 The embattled former president of the Quebec Bar formally stepped down in mid-September after a settlement agreement was reached with the Barreau and its board of directors that provided Khuong with “assurances” that her electoral program would still be considered, and where possible, put in place.

“If I listened to myself and took the decision only for me, Lu Chan Khuong personally, I would have pursued the fight and I would have brought the case all the way to the Supreme Court of Canada,” said Khuong.  “But I said to myself I am bigger than that, and I must take a decision that takes into account everyone and not just my personal interests.”

Khuong’s resignation seemingly ends a summer-long dispute that had literally paralyzed the Barreau while drawing severe criticism from members of Quebec’s legal community who assert that the sorry episode has blotted and undermined the credibility and reputation of the Bar and the profession. Indeed, four Quebec premiers, all of whom are lawyers, even took the unusual step of co-writing a letter stating that the president of the legal society should live up to the highest ethical standards.

“All this for this?” wondered rhetorically Stéphane Beaulac, a law professor at the Université de Montréal. “Her resignation was exactly what the board of directors sought when the allegations were first revealed. Instead we had this psychodrama that tarnished Khuong’s reputation as well as the profession and the Bar. This should have been handled differently.”

Khuong, a prominent Quebec City lawyer who was elected president of the Barreau du Québec this past May with 63 per cent of the vote, was suspended by the Quebec Bar’s board of directors on July 1 after confidential information was leaked to the media that she had been arrested on suspicion of shoplifting two pairs of jeans in Laval. Khuong, who maintains her innocence, was never charged.

However under the counsel of her lawyer Khuong accepted an offer of non-judicial treatment to avoid media coverage that likely would have taken place during a trial, particularly since she is well known in the province and is married to former provincial justice minister Marc Bellemare. Under the non-judicial program for minor offenses, a record of the alleged infraction is held for five years in a confidential registry that is accessible only by Crown prosecutors. The slate is wiped clean after five years if the person is not charged with another offence. More than 100,000 Quebecers have resorted to the program since its inception in 1995. The Khuong case marks the first time that confidential information was leaked from the non-judicial program – and Khuong is determined to find out who was the culprit. Only three organizations – Laval police, the Quebec Ministry of Justice, and the retailer Maison Simons — had access to her file, asserts Khuong. She has ruled out the Laval police because they have a “watertight process.”

“I will continue to take steps to find out who the source of the leak and when I’ll know they will be held accountable,” said Khuong. “Not for personal vengeance but the exercise must be made to restore the citizen’s confidence in non-judicial treatment because it is a program that allows the courts to devote time to more complex issues…I have a very good idea of where the leak comes from. It’s not just a leak. It was someone who had several reasons not to have me there (as president).”

Khuong’s suspension lead to an embarrassing public dispute that degenerated into a costly legal battle at a time when the professional corporation has strongly been encouraging the public to resort to alternative dispute resolution, particularly with the onset of the new Code of Civil Procedure next January, which compels parties to alternative ways to resolve disputes before taking them to court. Khuong sued the Bar for $95,000 while demanding to be reinstated to her position as president, and the Quebec Bar countered with its own lawsuit demanding $90,000 before the matter was ultimately resolved with the assistance of former Quebec Superior Court Chief Justice François Rolland who acted as a mediator between the parties.

“For the past two months, if you take a look at the Barreau’s website nothing was done – it was total paralysis,” said Khuong. “All decisions were about my case. I said to myself that I cannot allow the professional corporation in this state and that I must do something about this impasse.”

Other considerations also came into play, beginning with the expenses associated with the lawsuit, admitted Khuong, who estimates that she had spent approximately $500,000 in legal and public relation fees. She believes that it would have cost her an additional $500,000 to hear the month-long case as 22 witnesses expected to testify. The saga also proved to be hard on her two teenagers. Of equal importance was the assurance that she received from the Quebec Bar and the new batonniere that “an effort would be made to apply” her electoral program, added Khuong.

Her program is largely based on slashing expenses at the Barreau. She intended to reduce the salary of the president from $300,800 to $185,000, lower membership fees which now hovers around $3,000, decrease professional liability insurance coverage from $10 million to $2 million, and cut expenses and perks at the Barreau itself. As well, Khuong wanted to make justice more accessible and was intent on lobbying the provincial government to introduce tax credits for legal fees. She also proposed crediting pro bono work towards the legal society’s compulsory continuous training program. In short, Khuong wanted to shake up the Barreau.

“There needs to be a cultural change,” said Khuong. “We need to examine expenditures to see what can be cut and refocus the Barreau on its real mission, which is the protection of the public. International travel on business class for spouses should be a thing of the past because members cannot afford to pay it. Fiscal austerity should be done at all levels. The exercise I wanted to conduct would have been a real diet.”

Claudia Prémont, who was nominated by the board of directors to replace Khuong and was endorsed by Khuong herself, is comfortable with much of Khuong’s electoral platform. “There are many ideas that are part of Khuong’s program with which I am very comfortable with,” said Prémont. “Besides, following the settlement agreement there was a joint declaration and the Bar is committed to go forward with Khuong’s program, and with due regard to members who voted for her as president.”

Khuong will be keeping a watchful eye on developments, warning that if she is unsatisfied with the progress that she will seek another term. But that may prove harder to do following her settling of accounts before a popular French-language television show where she alleged that some batonniers had problems with the taxman while another needed a chauffeur because he no longer had a driving licence – and the Barreau closed its eyes. She also suggested that former Quebec premier Pierre Marc Johnson, one of the signatories of the letter, would be better off reimbursing taxpayers $200,000 in legal fees that his spouse, the ex-president of the Tribunal administratif du Québec (TAQ), incurred. Hélène de Kovachich was suspended for six months for using TAQ’s budget to pay the legal fees of her lawyer on a personal matter. Khuong also suggested in the television show that “you’d be surprised by the number and names of people” that took part in the non-judicial program for minor offenses.

“I was not very nice with everybody,” chuckled Khuong. “It’s as if there are double standards, depending on who is the president. I gave a couple of examples of situations that took place at the Barreau for which there was no problem and the batonniers were able to keep their jobs. As far as I’m concerned, they did not want me there. So it’s clear that any grounds were good.”

Beaulac was far from impressed by her comments in the show, and believes there may even be grounds for the syndic or investigating officer to conduct an investigation on her for infringing the Quebec Code of Professional Conduct of Lawyers.

“It was surreal,” remarked Beaulac. “What stands out in my mind is that her counter-attacks were exaggerated, vicious, and tarnished reputations through insinuations. It goes completely against the grain of the reasons she offered for her resignation, that is, for the good of the professional corporation.”