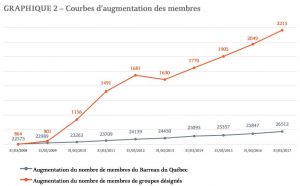 The number of lawyers in Quebec has grown by 17 per cent over the past decade, with women leading the charge and now representing more than half of the Quebec Bar, according to a survey by the Quebec legal society.

It’s no wonder why young Quebec lawyers face bleak prospects. Even the new president of the Quebec Bar, Paul-Matthieu Grondin, remarked recently that it boiled down to a matter of supply and demand. A troubling report by the Young Bar of Montreal revealed last year that Quebec law students are having a harder time finding articling positions, getting paid less for them, and receiving fewer job offers after articling,  and it urges the provincial law society to establish “reasonable” and variable quotas to curb the “uncontrolled” rising number of lawyers in the province.

The survey traces a portrait of the number of Quebec lawyers who are Aboriginals, minorities, lesbian, gay, bisexual, and transgender (LGBT), and handicapped.

Women make up 52 per cent, or 13,899, of Quebec Bar members. The average age of Quebec female lawyers stands at 41 (compared to 45 for men), and have on average been practicing for 14 years (compared to 21 for men). The majority of women, or 58 per cent, identify themselves as belonging to an ethno-cultural group. 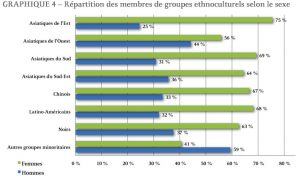 The number of lawyers who identify themselves as being part of an Aboriginal, an ethno-cultural, or handicapped group has grown by 156 per cent since 2008, from 864 to 2,215 members in 2017. That represents 8.4 per cent of the total number of Quebec lawyers. The numbers are broken down as follows:

And here is a breakdown of the eight most prevalent minority groups: 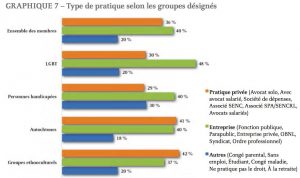 “Diversity and inclusion represents a challenge we have to step and meet over the next few years to progress towards a profession that is an image of society,” said the survey. “It’s a question of credibility for the profession.”

Grondin said recently that the Quebec Bar can and should do better.

“Within the Bar’s Board of Directors, with perhaps an exception or two, we unfortunately all have French names,” said Grondin, before adding that it’s only a matter of time before diversity makes inroads in the Quebec Bar itself.