The Quebec provincial government should follow Manitoba’s lead and eliminate the business tax for small and medium-sized business with net taxable earnings under $500,000 so long as they invest the amounts saved in employment, innovation, and production, suggested the head of a Montreal accounting firm at a tax conference.

The latest Quebec budget has put the province in a better position to grow and prosper by gradually lowering the general corporate tax rate but the provincial government should contemplate abolishing income tax for small businesses to stimulate the economy even more, said Emilio Imbriglio, the president and chief executive officer of Raymond Chabot Grant Thornton. 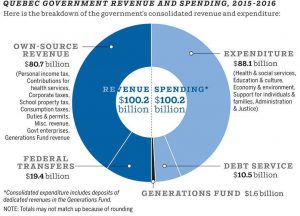 The Quebec budget of last spring partially heeded recommendations made by the Quebec Taxation Review Committee, a blue-ribbon panel of tax experts headed by noted economist Luc Godbout who proposed a bold overhaul of Quebec’s tax system that would introduce a new tax mix by slashing $5.9 billion in Quebec personal and business taxes while increasing consumption taxes and fees. Modest tax relief is in sight for Quebec small business following the latest provincial budget. General corporate income tax will be gradually reduced from 11.9 per cent to 11.5 per cent over the next five years. SMEs pay a reduced amount and manufacturing businesses in primary industries such as fishing and forestry will see their tax rate drop in half to 4 per cent in 2017.

“The economy in the 21st-century is based on globalization, an economic reality that changes everything and brings into question the traditional notion of taxing small business,” Imbriglio told the audience of tax professionals who attended the TaxCOOP conference in Montreal. “The tax system should provide even more incentives to encourage further investment by wealth creators so it’s important to evaluate the possibility of completely eliminating taxes on SMEs. Those are the issues that elected officials have to grapple with.” 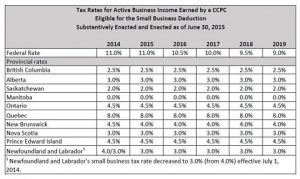 Imbriglio applauded the Quebec government for following through on another Godbout recommendation by allowing business owners to benefit as of 2017 from a capital gains exemption when selling their primary or manufacturing sector company to a corporation owned by their children or to a non-arm’s length party. But Imbriglio is calling on the government to extend that capital gains exemption to all sectors. “We must go even further for this measure to have a real impact, and extend it to businesses in all of Quebec’s economic sectors,” said Imbriglio, pointing out that a third of Quebec entrepreneurs will be taking their retirement by 2023, and so it is time to “prepare the ground for their successors.”

Godbout, who also spoke at the Montreal tax conference, wants the provincial government to take bolder action, particularly since Quebec heavily taxes its taxpayers. At present, the ratio between tax revenues and GDP is higher in Quebec than the average for the G7 countries and the member nations of the Organisation for Economic Co-operation and Development (OECD), noted Godbout. Quebec’s taxation is also higher than its main North American trading partners with respect personal income tax, corporate income tax, consumption taxes, payroll taxes, and wealth taxes. A telling example is the difference between Ontario and Quebec: if the Quebec government had applied the same income tax system now in place in Ontario, it would have collected $6.5 billion less in tax revenues. The astonishing difference lies with the income tax rates for individuals earning between $30,000 and $100,000. They are the ones who bear the brunt, added Godbout. The only area that Quebec provides a break to its citizens is with electricity rates, where levies are lower than in neighbouring jurisdictions. “Quebec’s tax system is not adapted to the realities of the 21st-century,” remarked Godbout. 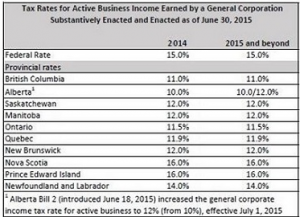 The Godbout report also recommended revamping the corporate income tax system . It proposed measures that would lead to a $1.6 billion corporate tax cut, including slashing the pay roll tax by $450 million, that would be funded by a revision of tax expenditures as well as broader recourse to user fees. It also suggests reducing the payroll tax for SMEs from 2.7 per cent to 1.6 per cent, which would reduce their tax burden by $450 million.

More controversially, he proposes an increase in consumption taxes, including raising the provincial sales tax from the current 9.975 per cent to 11 per cent. These increases would generate $2.665 billion in additional tax revenues, said Godbout, who noted that Quebec as well as the rest of Canada pay less tax on goods and services than the average OECD member. “Taxing too much on revenues and less on consumption would not be that serious were it not for the harmful effects it has on our economic growth,” said Godbout.

OECD studies reveal that an increase in capital taxes, corporate income taxes, and personal income taxes undermines growth while a reduction has a positive impact on growth, said Godbout. An increase however in consumption taxes or user fees has a much more limited impact on economic growth. “The idea behind the reforms we proposed is to rely less on taxes that are harmful and rely more on that cause less harm – it seems rather obvious,” said Godbout.