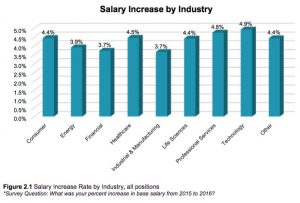 The average annual salary of in-house counsel has risen over the past year yet massive numbers would not hesitate to scamper off to a new job, revealed a recent report.

The median annual salary increase rate for all positions across industries climbed by 4.3 per cent, up a fraction from 2016, according to the BarkerGilmore 2017 In-House Counsel Compensation Report. More than 1,500 in-house counsel in the United States responded to the online survey that was conducted from March to May 2017.

But that modest increase was not uniform across all sectors. In-house lawyers working in the tech sector experienced the largest upturn, with salaries up by 4.9 per cent, followed by those working in the professional services segment, with salaries rising by 4.8 per cent. At the tail end, in-house counsel employed by the financial sector and industrial and manufacturing received a paltry salary increase of 3.7 per cent, while those employed by the energy sector fared slightly better with a 3.9 per cent increase.

Regardless of the salary increase, in-house counsel are not happy campers. A little less than half, or 43 per cent, believe their compensation is below or significantly below than their peers working elsewhere, with litigators reporting the greatest dissatisfaction. Those working in real estate and banking or finance however expressed the highest levels of satisfaction, with over 20 per cent reporting compensation or significantly above average. 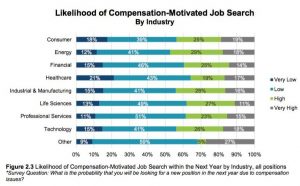 It’s no wonder then that at least one in three in-house counsel across all sectors assert there is a high or very high chance that they would consider a new job because of compensation issues. The figures are even more dismal when broken down by sector:

The report also reveals compensation averages for general counsel, managing counsel, and senior counsel. And the gap between those working in the public and private sector is staggering. The size of the gap decreases however as the position level decreases.

Senior counsel, the rank-and-file lawyers in a legal department, earned no more than $300,000, regardless of whether they worked in the private or public sector. The highest paid jobs for senior counsel were in life sciences, ranging between $227,500 and $281,927, while the lowest were those in the professional services, between $175,000 and $209,219.

“Many leaders overlook the fact that creating a competitive advantage…requires not only an in-depth evaluation of the current legal spend, but a detailed comparison with specific data and information pertaining to counsel compensation,” warned the report. “Likewise, organizations must hire and/or retain the talent necessary to consistently improve efficiencies and find ways to maximize the business’ competitive advantage.”

With great numbers of in-house counsel seeking greener pastures, it appears that leaders and organizations have their work cut out for them.