In a “sad saga” of a successful franchise operation that suffered a meltdown in Quebec following aggressive and fierce competition, a 12-year legal battle came to a bittersweet end after the Quebec Court of Appeal upheld a lower court ruling and ordered Dunkin’ Brands Canada Ltd. to pay 21 Quebec franchisees nearly $11 million, an amount that rises to $18 million with interest and additional indemnity, for breach of contract, misrepresentation, and negligence.

In the biggest Quebec franchising case in nearly two decades, the Quebec Court of Appeal concluded that the franchise agreements between Dunkin’ Donuts and its franchisees explicitly imposed on Dunkin’ Donuts an obligation of means to take reasonable and timely measures to protect and enhance its brand, particularly in the face of market changes. The franchisor was also bound by obligations that could be implied in the agreement under article 1434 of the Civil Code of Quebec (CCQ), including the implied obligation to act in good faith towards its franchisees, to cooperate with them, and to assist them, held the appeal court. “The obligations owed by the franchisor were not only those explicitly stated in the agreements but also implicit obligations that flowed from the nature of the franchise agreement,” said appeal court Justice Nicholas Kasirer in a unanimous 53-page ruling in Dunkin Brands Canada Ltd. v. Bertico Inc. 2015 QCCA 624.

The reach of the ruling remains unclear. Some franchise experts maintain that the decision could have an impact for franchisors operating in the rest of Canada thanks to the duty of fair dealing under provincial franchise legislation and the Supreme Court of Canada’s recognition of a common law duty of good faith performance in contractual relations in Bhasin v. Hrynew, 2014 SCC 71. Others assert that it is a Quebec decision that applies civil law and is not binding on any court outside of Quebec. Franchise experts, though, widely expect that franchisees across the country will take a broad interpretation of the Court’s findings as grounds for expanding the scope of a franchisor’s implicit obligations to a franchisee.

“The reach of the ruling is essentially limited to Quebec but some of its principles may have some outreach,” noted Frédéric Gilbert, a franchise lawyer with Fasken Martineau DuMoulin LLP who successfully plead the case. “There is a trend in common law jurisdictions where good faith and certain obligations of honesty (is recognized), and on that level the judgment may have some echo but it doesn’t have a binding effect.”

The group action was launched by 21 Dunkin’ Donuts franchisees that collectively operated 32 franchises in Quebec following an aggressive incursion by Tim Hortons into the Quebec market. Though historically a strong brand in Quebec, more than 200 Dunkin’ Donuts stores in the province closed in less than a decade, and its market share plummeted from 12.5 per cent in 1995 to 4.6 per cent in 2003. The franchisees alleged in its action that the franchisor had failed to take reasonable steps to protect and promote the Dunkin’ Donuts brand in Quebec in spite of repeatedly voicing their concerns to the franchisor. After a 71-day trial, with 478 exhibits filed and more than 30 witnesses testifying, Quebec Superior Court Justice Daniel Tingley found that the franchisor had breached its contractual obligations by failing to adequately support its franchisees, and to protect and enhance its network in Quebec. The trial judge resiliated the leases and the franchise agreements, and awarded the franchisees $16.4 million which amounted to 100 per cent of the damages sought for profit and for lost investment. 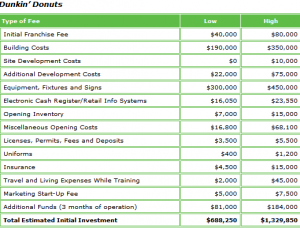 The lower court ruling, which drew national attention, was appealed by the franchisor. It abandoned on appeal its unsuccessful argument at trial that the franchisees were the artisans of their own misfortune because they had failed to respect the business model imposed by the franchise agreements, and argued instead that the trial judge had erred in law by misinterpreting the explicit and implicit terms of the franchise agreements. The franchisor also argued the trial judge had “imposed a new unintended obligation to protect and enhance the brand, outperform the competition and maintain indefinitely market share”. The appeal court dismissed the arguments, and affirmed the lower court’s decision on liability but reduced the damages award.

“The Court did not create new obligations for franchisors,” said Joëlle Boisvert, the managing partner of the Montreal office of Gowling Lafleur Henderson LLP. “It clarified the nature and extent of the obligations. This implied obligation, the obligation of means of the franchisor to protect and enhance the brand, is basically one aspect of its duty to collaborate with the franchisee in order to ensure that the system and the network continue to grow for the benefit of the franchisor and franchisees.”

The appeal court decision is “really about giving a new lease on life” on the notion of implied obligations emanating from the nature of franchise agreements under article 1234 of the Civil Code, a concept that was established by the landmark 1997 Quebec Court of Appeal decision in Provigo Distribution Inc. v. Supermarché A.R.G. Inc., according to Alexandre Fallon, a Montreal lawyer with Osler, Hoskin & Harcourt LLP. The appeal court ruling is significant because it puts to rest a largely-held notion in Quebec, and one that was argued by the franchisor before the appeal court, that Provigo limited the duty of good faith and the implied obligations in a franchise agreement to a duty incumbent on the franchisor to not compete unfairly with its franchisees or to wrongfully take actions that would harm them. “The Court of Appeal is quite right that Provigo was never meant to be interpreted in such a restrictive fashion,” said Fallon. “It clarified that and has really made it clear that this is meant to be a long term relationship and there are implicit duties that flow from that, and that is something that was perhaps not well understood by the bar.”

But the ruling will also likely create uncertainty for franchisors, pointed out Chantal Tremblay, a Montreal litigator with McCarthy Tétrault LLP. “Just how far will franchisors have to go to protect its brand,” wondered Tremblay. “The ruling makes explicit an obligation that is intrinsically implicit. That was the key issue of this decision for franchisors regarding their trademark. This decision now clarifies obligations that will have repercussions in many other facets of the role of franchisors. That is clear.”

But there is a silver lining for franchisors, said Gilbert. “There’s some comfort in this judgment for franchisors because Justice Kasirer opens the door by saying that if the contract had ruled out this obligation to protect and enhance the brand, then maybe there would have been another outcome,” said Gilbert. Franchisors should therefore review and redraft franchise agreements to reduce their potential liabilities under the implied obligations, added Gilbert.

Franchisors in Quebec would also do well to develop and enforce compliance programs, said Tremblay. Though franchisors are not bound by an obligation of result, they must ensure that they protect the integrity of its franchise system and maintain an infrastructure that will sustain the viability of the franchise system. “They must show that they acted diligently,” remarked Tremblay.

While the franchisor’s obligations to protect and enhance the brand in its network of franchisees is seemingly far-reaching, it remains to be seen whether the appeal court ruling will have an impact beyond Quebec. Jennifer Dolman, a Toronto franchise lawyer with Osler, doubts it. “I fully expect franchisee counsel to try to use it and rely on it,” said Dolman. “ I am not too concerned about this case outside of Quebec. I don’t see courts outside of Quebec imposing positive duties in a vacuum or in the absence of some language (in the franchise contract) that is going to ground a court in implying some obligations.”