In the works for the past two years, the Montreal Municipal Court became the latest jurisdiction in Canada to launch a mental health court even though a coalition of local community organizations sought a moratorium and a study to examine the effectiveness of specialized courts for mentally ill people.

Modelled after the Toronto Mental Health Court, the three-year pilot project has put in place a multidisciplinary team to deal with mentally ill people charged with minor criminal offenses. Based on a therapeutic model of criminal justice that seeks to provide a dignified and compassionate approach to dealing with accused persons afflicted with mental illness or developmental disabilities, the Court sits five days a week during the afternoons.

Participation in the program is voluntary. Accused persons are given a choice of either facing proceedings before a regular tribunal and possibly face a sentence or opt for the “therapeutic court” and agree to be closely monitored by the court to ensure treatment compliance. Conditions, however, meted out by the mental health court will not imposed but rather be the “object of a moral contract between the offender and the Court,” according to 14-page document report outlining the objectives and structure of the new program. Further, accused are entitled, at anytime, to withdraw from the program and have their case heard in ordinary court. Offenders who complete the program can have charges dropped or expunged. 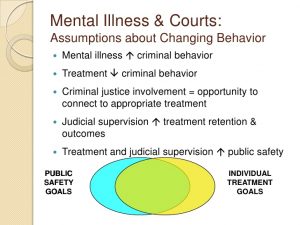 The specialized court will likely be kept quite busy. It is expected that more than 600 accused will stand before the Montreal mental health court, representing more than 1,200 cases, given that defendants have on average 2.6 cases pending against them.

“The courts feel that by lending their authority to the therapeutic process that they are seeking out solutions to this problem and helping those people,” said Elizabeth Corte, Associate Coordinating Judge, Court of Québec, Criminal Division.

“But it still remains a judicial process. It is not a court apart. The powers the judge has, that decides his moral authority are the powers that are granted by the Criminal Code (of Canada). If legal questions arise, they have to be dealt with in a judicial manner, following the precepts of the Criminal Code. Always. That doesn’t disappear because you call it a mental health court.”

But local community groups that help defend the rights of the mentally ill remain sceptical, pointing out that little research has actually been done to evaluate the effectiveness of such courts. While pleased that the judicial system is beginning to adapt to try to meet the needs of accused persons with a mental illness, they are concerned that the very existence of such a tribunal – and its appellation — will end up generating more stigma to the mentally ill.

“The initiative has good intentions – to avoid  reducing the criminalization of the mentally ill,” said Doris Provencher, a coordinator with the Association des groupes d’intervention en défense des droits santé mentale du Québec. “As it stands people afflicted with mental health problems are citizens who are set aside, and now the justice system is about to do the same rather than attack a social service system that has deficiencies.”

Jean-Pierre Ménard, a Montreal lawyer who specializes in health and medical liability, believes that while there are obvious benefits in having a program that addresses a vulnerable clientele, there is a danger that the Montreal mental health court may become too informal.

“We have very strict rules that dictate court proceedings, and we should not tolerate that they become more informal,” warned Ménard. “Evidence entered into a mental health court should be held to the same standards of a regular criminal proceeding. Too much informality can be prejudicial.”

There is also the threat that mental health courts, which straddle uneasily between the two worlds of criminal law and mental health, could end up coercing people into treatment at the expense of their rights, even though it is a voluntary program. “When an offender is told that they will not be prosecuted so long as they follow their treatment, which can include taking medication, that can be seen as an excessive intrusion into the rights of a person. The judicial system should not be used for health purposes. The judicial system is supposed to be used to repress crimes in a society.”

Judge Corte doesn’t share those concerns. Rather she is uneasy that the so-called “net-widening” phenomena may end up grabbing hold of the new mental health court.

“There is always a risk that when you have a specialized court that all of a sudden you put more people into that category than you used to before – we have to be very careful of that,” said Judge Corte.