The sweeping executive order, since rescinded by the courts, led to global chaos as it barred many passengers from flights to the United States, including one of Moravej’s team members. “He had an interview scheduled but couldn’t go to the U.S.,” explained Moravej. “And there were other students who planned to continue their studies in the U.S. but because of the policy changes had to stay here. So we decided to accelerate the launch to help students who are currently in Quebec to get their permanent residency.”

The AI-driven chatbot uses machine learning to assist people through the complicated process of putting together an immigration application. Immigration into Canada and Quebec (which has different programs in place) is a laborious three-step process. Applicants must determine if they are eligible, then must provide supporting documents, and finally fill out an application form, which in itself can be tricky. 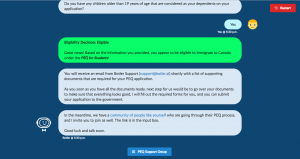 That’s where the web-based application at Botler.ai can come into play. It automatizes much of the process. After an applicant answers questions about their qualifications and circumstances, Botler assesses if they are eligible for the immigration program. If so, the applicant can then upload the documents which the AI tool reads and reviews. If all goes well, Botler automatically fills out the application form based on the information the applicant has provided.

Botler does more. If for whatever reason the applicant does not meet the immigration eligibility requirements, the AI tool can provide the applicant with “feedback and insights” and steps the candidate can take to take to become eligible, noted Moravej. And it learns and becomes “smarter” as it goes along because it uses deep learning, particularly for document reviews. The machine learns through recognized patterns based on the data it previously “saw,” explained Moravej. That is particularly useful as Botler has the potential of recognizing forged documents.

“There are two things the machine can learn,” explained the Iranian-born developer. “First of all, it learns the profile of the user such as his experience and his educational background – all these things the machine can understand. And the machine can understand the rules of immigration and can determine if you are eligible or not. All these things are basically a decision-making process, and computers are very good at making decisions because they can calculate way more possibilities than us as humans. And it will get smarter as it sees more immigration cases.” 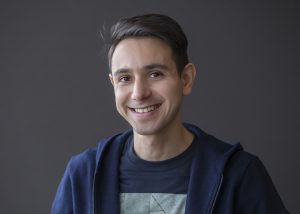 Moravej, who developed Botler out of personal necessity, maintains that the chatbot will not replace lawyers. Indeed, Nonimo A&A Technologies, the nascent firm behind Botler, are working with Montreal law firm Campbell Cohen. Nonimo trains the machine, and the lawyers test it to ensure that Botler covers all cases and captures all of the exceptions.

“Botler can augment what lawyers are doing and make their lives easier as it automates many things that lawyers are doing manually right now,” Moravej told me. “As a result, lawyers can process and can represent more clients because many of the tasks that they have to do manually can be automated using Botler. At the end of the day, a lawyer needs to represent a client before the government so Botler can in no sense replace a lawyer.”

At present, Botler can handle only a single immigration program – the Programme de l’expérience québécoise (PEQ) for foreign workers and students residing in Quebec. As of the beginning of April, 1,752 applicants used Botler to assess their eligibility, and Moravej said that 438 applicants will either be eligible or will become eligible to apply for PEQ, if they can resolve minor issues with their cases. In the near future, Moravej intends to adapt the technology to encompass other federal and provincial immigration programs.

Across the Atlantic, a Stanford University student in Oxford, England Joshua Browder has embarked on a similar venture. The London-born developer and creator of DoNotPay, a chatbot that has overturned 160,000 parking fines in England, recently turned his sights on helping refugees claim asylum. The chatbot, which uses Facebook Messenger, helps refugees fill in immigration applications in the U.S. and Canada, and it helps those in the United Kingdom apply for asylum support. Like Botler, the chatbot asks applicants a series of questions to determine which application the refugee needs to fill out and assesses whether the refugee is eligible for asylum protection under international law.

Both Moravej’s and Browder’s chatbot are the latest examples of online AI-powered tools that can expedite access to justice, an issue that has befuddled the legal profession for decades. “These tools that are now coming online are such a great opportunity to unlock access to justice, which is such a prevalent need in our society,” said Matthew Peters, national innovation leader at McCarthy Tétrault LLP in Toronto. “You have this whole huge swath of people in the middle class and all sides who quite frankly have (been the subjects of) a disservice from our profession who have not provided proper access to justice. We should be focusing on how fast can we get some of these solutions out.”

Jin Ho Verdonschot, a justice technology architect at HiiL Innovating Justice too believes that AI holds much promise at providing greater opportunities for access to justice. “Artificial intelligence is a very good example of one of the many innovations now happening in the legal services world,” Verdonschot said at a conference held in Montreal last fall. “There are so many tools that (that are) emerging and being developed that will have real value and can really empower our citizens. And I think AI will have a place in that future.”

Very interesting !
We at http://www.chatbotcanada.com really believe that chatbots are going to change the worlds of customer service.
E-commerce, law, immigration processes…

Dear sir ,
Am applied a long time means 8+9 months before but now they are not give me CAQ latter.
Am applied by college platon (international languages college)
Sir I wanted learn French.
Can you help me .
Cyrilrockx@gmail.com.