A Muslim non-profit organization that sought to obtain the status of a religious institution in order to obtain an exemption from paying municipal and school property taxes won its case after Quebec Superior Court overturned a ruling by Quebec’s administrative tribunal.

In a ruling that reversed a recent trend by Quebec adjudicators who interpreted the notion of religious institutions narrowly and restrictively, Quebec Superior Court Justice Carol Cohen held that it should instead benefit from a broad and liberal interpretation. While the expression religious institution is not defined by Quebec law, Justice Cohen heeded guidance from Quebec jurisprudence as well the recent Supreme Court of Canada’s ruling in Loyola High School v Quebec (Attorney General) 2015 SCC 12, and held that that a religious institution exists when an organized group of persons establish or create an organization to facilitate the pursuit and realization for religious purposes.

“The Fondation case resembles a lot to the Loyola High School, a non-profit corporation that is involved in private education, the only difference being the Muslim faith of its founders,” said Justice Cohen in Fondation Internationale Azzahra inc. v. Cour du Québec 2015 QCCS 1307.

“This is an important ruling because the appreciation of what constitutes a religious institution and religious activities was increasingly being interpreted in a more limited and restrictive fashion by adjudicators and the courts,” explained Sébastien Dorion, a Montreal lawyer with Dunton Rainville who successfully plead the case. “This ruling sets the record straight and restores the broad and liberal interpretation that existed before the new restrictive interpretation began to take hold.”

The case deals with Fondation Internationale Azzahra, a Montreal charitable and Islamic religious foundation established in 1989. It owns and operates a mosque, a Muslim cemetery, Islamic schools, and conducts charitable, philanthropic, community and cultural activities. The property that houses its mosque and cemetery were exempted from paying municipal and school property taxes because it was granted the status of a religious institution. In 2008, the Fondation acquired another property in Montreal that housed a high school, and it was granted a licence to teach by the Quebec Ministry of Education. In 2009, the City of Montreal issued two certificates exempting the Fondation from paying municipal and school property taxes on the school because it deemed it to be part of a religious institution.

But the Quebec Ministry of Municipal Affairs, Regions and the Occupation of Territory (MAMROT) contested the two exemptions and brought the matter before the Tribunal administratif du Québec (TAQ). On November 2011, the adjudicators ruled in favour of MAMROT and held the Fondation should not qualify as a religious institution under the Act. Rather the TAQ held the Fondation should be classified as a cultural and community organization because its letters patent and promotional materials do not describe it as a religious institution and because its stated aim was above all charitable, philanthropic, and community-based. Oddly, the TAQ ruling made no reference to the fact that the Fondation was already granted the status of a religious institution for its other properties that housed the mosque and the cemetery. 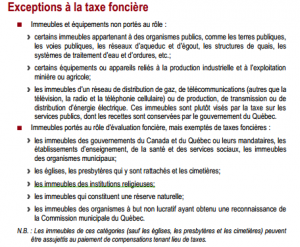 The financial consequences of the TAQ ruling were enormous. If the ruling was upheld, the Fondation faced a tax bill running into the hundreds of thousands of dollars in back taxes, said Dorion. An exemption would spare it from paying municipal and school taxes that range between $75,000 and $100,000 annually. The Fondation successfully appealed the ruling.

Justice Cohen overturned the TAQ decision, and held that the adjudicator’s decision was “incomprehensible and unreasonable,” particularly since the Fondation was already certified as being a religious institution for its other properties. “If the interpretation of the TAQ and MAMROT is correct, then all religious institutions will have to abstain from doing too much charitable, philanthropic or educational activities, in order not to lose its qualification as a religious institution” under the Act, noted Justice Cohen. “Such a conclusion would be the equivalent of an amendment to the Act and would require a definition of what is too much of these activities, a definition and limitation that is nowhere to be found in the Act.”

“The ruling is lucid,” said Daniel Bouchard, the managing partner of Lavery, de Billy’s Quebec City office and an expert in municipal law. “If one thinks about it, it would be counterproductive for a society at large (if the TAQ decision was upheld). We’d be asking religious institutions who want to continue to benefit from the exemption to conduct the least charitable work possible. That would be a misinterpretation of the Act.”

Dorion has another client that faces the same plight as the Fondation. The TAQ turned down the organization’s application to be certified as a religious institution because it was “too involved in education,” said Dorion. He intends to use Justice Cohen’s decision to appeal the TAQ decision.