Federal Minister of Justice Jody Wilson-Raybould announced the appointment of Kathleen Roussel, a former criminal lawyer, as the next director of Public Prosecutions.

Roussel, who graduated from the University of Ottawa’s French Common Law Program in 1992 and called to the bar in 1994, practised criminal law in Ottawa before joining the Department of Justice in 2001 as senior Counsel and director of the Canadian Firearms Centre Legal Services. Roussel then served as senior General Counsel and executive director of the Environment Legal Services Unit at the Department of Justice Canada (2005-2008) until her appointment as deputy director of the Public Prosecution Service of Canada in April 2013. 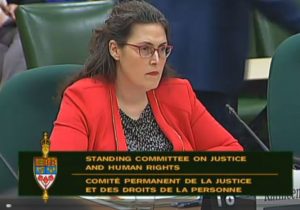 Roussel, a native of Baie-Comeau, Quebec, will serve as the new director for the next seven years, in accordance with the Director of Public Prosecutions Act.

Here is a video of Roussel responding to questions about her appointment as director of Public Prosecutions before the Standing Committee on Justice and Human Rights.