An unprecedented international collaboration on tax reform that recently unveiled sweeping plans to crack down on aggressive tax planning by multinational companies has the potential of becoming the biggest shake-up in international tax rules in nearly a century, according to tax professionals.

Endorsed by G20 finance ministers and leaders, the ambitious proposals by the Paris-based Organisation for Economic Co-operation and Development (OECD) aims to close loopholes, increase transparency to assist tax authorities in risk assessments, and restrict the use of tax havens to curb many international tax planning strategies. The plan, known as the Base Erosion and Profit Shifting (BEPS) project, lists 15 specific actions intended to establish coherent rules for corporate income taxation, prevent tax treaty abuse, tackle the tax challenged posed by the digital economy, and amend the world’s 3,000 bilateral tax treaties through a multilateral instrument.

The initiative mandated by the G20 was launched two years ago in the wake of intense political scrutiny and public outcry over the likes of Apple Inc., Google Inc., and Starbucks Coffee Company moving billions of dollars of profits out of higher-tax countries into low or no-tax jurisdictions. The OECD conservatively estimates that profit shifting leads to annual general losses ranging between four per cent and 10 per cent of global corporate tax revenues, or the equivalent between US$100 billion and $240 billion a year.

The confidence citizens have in the fairness of the tax system at large is at stake when there is an overriding perception that multinationals can avoid their tax liability through tax planning, Pascal Saint-Amans, the OECD’s tax director who spearheaded the reform program, told an audience attending a tax conference in Montreal. The OECD proposals are an attempt to ensure that multinationals are taxed where economic activities take place and where value is created, added Saint-Amans.

“The tax system became illegitimate, incomprehensible,” remarked Saint-Amans. “There was a need to make some sense into something that no longer had any. The OECD believes in the virtues of globalization but globalization only can work if there are some sort of regulations. We need to have a change of paradigm in international tax, and I believe that we made so much progress that we can speak about a paradigm change. This is a new era.” 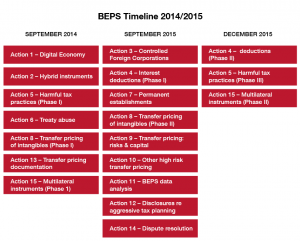 The OECD deserves credit for developing in such a short timeframe a “meaningful and substantive” comprehensive action plan that attempts to establish fair ground rules of competition, said Gabe Hayos, CPA Canada’s vice-president of taxation. “Anytime you come up with something new like this, there will be different perspectives as to whether it is good or it will be a hindrance to trade but I think they did an excellent job for a very difficult initiative,” Hayos told The Bottom Line.

Now the really hard work begins, admits Saint-Amans. The OECD does not have the power to set laws or sign tax treaties so its effectiveness hinges on their widespread and consistent implementation by governments through tax treaties and domestic law, added Saint-Amans. Business is sceptical. Less than a quarter of business leaders believe there will be a global agreement on BEPS, according to a recent survey conducted by Grant Thornton. As points out Hayos, it’s tough enough to reach a bilateral agreement, let alone a multilateral agreement. Yet Hayos is cautiously optimistic. “There’s no question that there is reason to be sceptical because we have never done it before but BEPS itself is an evolution,” said Hayos, who hosted the BEPS discourse at the Montreal TaxCOOP conference. “There will be certain things that will be easier to agree on and they will be the first things that will be included in the multilateral agreement, and then depending on it success there may be other things that are slowly agreed to.”

Some countries, including Australia and the United Kingdom, are already forging ahead and have announced that they will introduce legislation that covers some of the BEPS actions. Other countries like the U.S. have expressed reservations. While it is planning to bring in country-by-country reporting, which will require companies to reveal where they really earn their revenues, hold their assets, employ people, and book their profits, many of the OECD reforms will unlikely – if ever — be adopted before next year’s Presidential election.

The new federal government has yet to provide indications on where it stands on the OECD’s recommendations, though tax professionals believe that Canada will take steps in matters such as country-by-country reporting, interest deductibility reductions, transfer pricing, and treaty shopping. “If the BEPS initiative progresses the way that it is theoretically intended, I think that Canada may well make some changes to the effect that it will have an impact on its multinationals,” said Hayos. “Hopefully not competitively hurting them but making sure that the playing field is level for all of the countries involved.” 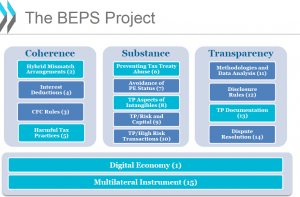 Canada should be reluctant, if not wary, before proceeding with many of the BEPS recommendations unless its most significant trading partners, particularly the United States, have enacted comparable amendments, warned Drew Morier, an international tax lawyer with Osler, Hoskin & Harcourt LLP in Toronto. The drive to reach consensus, coupled with the “extremely ambitious” timeframe, has led to many ambiguous recommendations that will invariably be subject to a host of interpretations which may lead countries to draft or interpret the recommendations in a self-serving manner. That in turn may lead to a significant increase in international tax disputes and compliance costs in Canada and around the world, said Morier.

“If you have countries who are enacting rules which they think are responsive to the recommendations but which end up asserting a right to tax more income of multinationals in that country, and if other countries are doing the same thing – then you end up with an increased possibility of more than one country asserting the right to tax the same amount of income,” explained Morier. “That could lead to more cross-border disputes between taxpayers and tax authorities in different countries over who does ultimately have the right to tax that income.”

It doesn’t help that the OECD altogether avoided discussing the most difficult issue in international tax matters — the allocation of taxing revenue between source and residence countries, added Morier. The consensus reached by OECD members therefore likely masks significant differences between countries over who will collect more tax revenue as a result of the proposals, said Morier.

Business in the meantime are caught in the middle, and are concerned. A survey conducted by Thomson Reuters reveals that slightly more than half of multinationals are “proactively” preparing for BEPS while a third are waiting for the OECD project to be completely finalised. However the survey also found that 59 per cent of European-based corporations companies are focused on BEPS planning compared to 48 per cent in the Americas and the Asia Pacific. Another survey reveals that 74 per cent of businesses would welcome guidance by tax authorities. None of which surprises Morier, who said that Osler’s clients are proceeding cautiously, albeit with a “very strong sense” that their international tax planning now has to take the OECD’s initiatives into account. All of which means that tax professionals have their work cut out.

“There is a greater need for tax professionals to stay informed about what’s happening outside of Canada,” remarked Morier. “There is also a greater need for tax professionals in Canada to exercise more judgment about whether something that a client is doing is not only legal but appropriate taking into account the broader international tax perspective.”