The majority of foreign bribes were paid by large companies, usually with the knowledge of senior management, to officials from developed countries to win contracts and cut through red tape, reveals an eye-opening report from a leading think tank that shatters many commonly-held preconceptions about corruption risks.

The report by the Paris-based Organisation for Economic Co-operation and Development, which analyzed 427 foreign bribery cases over the past 15 years, should prompt companies to review and tailor their anti-corruption compliance programs, particularly since nearly a third of the cases occurred in the extractive and construction sector, areas where Canadians are big world players, say compliance experts.

“It’s possible to do business without corruption,” said Milos Barutciski, the co-head of international trade at Bennett Jones LLP in Toronto. “If you have an effective compliance program, which means everything from the tone at the top, down to the procedures, education, training, monitoring and auditing, then you’re less likely to trip over the legal bright lines, and you’re more likely to be able to get the work done without committing an offense.”

The OECD report challenges the notion that bribes are mostly paid to heads of states and government ministers or public officials in poor nations. In almost half of the cases, or 43 per cent, bribes were made to officials in developed or highly developed countries. By far, the largest culprits were officials working for state-owned or controlled enterprises, who were the recipients of over 80 per cent of all bribes. “If you are dealing with state-owned enterprises or foreign officials, you want to understand who you are dealing with, what’s their reputation, and making sure that you are not dealing with the wrong people,” pointed out Stéphane Eljarrat, a partner in the investigations and white collar defence and taxation practices with Davies Ward Phillips & Vineberg LLP in Montreal. Companies also should have proper training programs for employees, third parties or suppliers who interact with state-owned enterprises, especially in countries like China where it can be difficult to identify what companies are state-owned, added Graham Erion, an anti-corruption lawyer with Davis LLP. 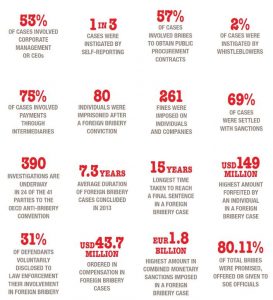 In the majority of the cases examined by the OECD, bribes were paid to obtain public procurement contracts (57 per cent), but the remaining 43 per cent arose from operational activities such as customs clearance, attempts to gain preferential tax treatment, licensing, and access to confidential information. “That is a reminder that you really have to keep your eye on the ball from a compliance perspective throughout the whole project cycle,” noted Erion.

Not surprisingly, intermediaries were involved in three out of four bribery cases, with go-betweens such as agents, local sales and marketing agents, distributors and brokers implicated in 41 per cent of the cases and corporate vehicles such as subsidiary companies and companies located offshore financial centers in 35 per cent. As points out said Peter Dent, the national leader of Deloitte’s forensic services practice, “that makes perfect sense because you don’t want someone from your organization to be involved. You want the payment to be off your books or be in somebody else’s books.”

Nor was Dent, the Chair and president of Transparency International Canada, surprised by the finding that in 41 per cent of the cases senior management employees paid or authorized the bribe while chief executive officers were involved in 12 per cent of the cases, thereby putting to rest the widely-held view that rogue employees are usually behind bribery schemes. “That is my consistent with my experience as well, especially when you talk about the sums of money that normally have to paid in exchange for these contracts,” said Dent. “There must be some senior management involvement to approve that level of expenditure.” The report found that bribes equalled 10.9 per cent of the transaction value of the deal on average, and 34.5 per cent of the profits, which equalled US$13.8 million per bribe. But given the very complex and concealed nature of corrupt transactions, it is “without doubt” the mere tip of the iceberg, warns the report.

The need for a rigorous anti-corruption compliance program is underlined by the finding that companies became aware of foreign bribery in their international operations through internal auditing in 31 per cent of the cases and mergers and acquisition due diligence procedures in 28 per cent. That’s a figure that will likely increase thanks to the growing number of companies that are becoming less tolerant of foreign bribery, assert anti-corruption experts. “The best scenario is to find out through internal mechanisms before it becomes a live issue with the authorities so you can deal with it, fix the problem, deal with the people involved, and then have the time to determine what is the proper course of action with regards to authorities,” said Eljarrat, who previously worked for the federal Department of Justice in its tax litigation section.

An effective compliance program that incorporates strong whistleblower protection mechanisms to “elicit early bona fide information” that could potentially save the company from the risk of corruption and the costs involved in exposure and sanctioning is key, says the OECD report. Companies are not paying attention though. Whistleblowers notified the corporate hierarchy of foreign bribery in 17 per cent of cases but only one company acted on the information and self-reported the matter to authorities. “Whistleblowing is still a very difficult thing for employees in any institution,” remarked Barutciski. “It’s all very nice to have a whistleblower hotline but the question is how do you respond to the whistleblower. The tendency in most institutions, including governments, is to circle the wagons and view the whistleblower as somehow having something against the company when in fact whistleblowers tend to be particularly loyal to the company and are offended by what they see as abuse of the company’s interest.” 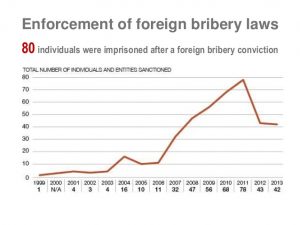 Anti-bribery enforcement steadily increased after 2005, hit a peak in 2011, with 78 cases concluded that year, dropped considerably in 2012, and leveled off in 2013, reports the OECD, which looked at cases from 41 countries, including seven non-OECD members, that are signatories to the OECD anti-bribery convention. Nearly 70 per cent of the cases were resolved through settlement, often involving a civil or criminal fee. In total, 80 people were found guilty of foreign bribery and fines were imposed on 261 individuals and companies, totalling 1.8 billion euros. Further, the average time taken to conclude foreign bribery cases has steadily increased, from two years in 1999 to 3.9 years in 2007 to 7.3 years in 2013. That’s because companies and individuals are less willing to settle foreign bribery cases, speculates the OECD. In Canada, it takes just as long, if not longer, but for different reasons. “We’re not just very good at it,” said Barutciski. “Law enforcement authorities are still new to the game and relatively speaking unsophisticated in white collar forensic investigations. They are learning quickly and getting decent staff and the government has been devoting more and more resources to those files. The same holds true for prosecution offices.”

There is cautious optimism among anti-corruption experts that Canadian companies are beginning to take foreign bribery more seriously and are viewing it less and less as a necessary evil. “We’re seeing a difference in the large, sophisticated companies,” said Dent. “We are not seeing a difference in the smaller medium-sized, mid-market companies which predominate the Canadian economy. For them it’s all about resources and capacity. But I am encouraged about what’s going on because people are talking about it more and more. What happens in the big corporations tends to trickle down to the smaller ones as well. It could take a generation for us to see real change. We’re still at the beginning.”

The government too needs to up the ante as well, said Eljarrat. The federal government needs to send a clear message that it will no longer tolerate foreign bribery, and when that happens, companies will begin to self-comply, said Eljarrat.