In a precedent-setting ruling that affirms the rights of class action plaintiffs and significantly restrains class action defendants from examining members of the class, the appeal court categorically concludes that there is no such thing as multiple categories of members. There are only members — including the representative and, if any, interveners — and those who chose to exclude themselves from the group. The appeal court also held that the lower court order that compelled detailed contact information of the class to be provided to defendants breached the right to anonymity and peace of mind that comes with being a member of a group. Further, the appeal court reaffirmed that a party may not submit a member to an examination on discovery unless the court has given its authorization. The appeal court also held that members of the class are protected by litigation privilege while representatives and members who communicated with counsel are protected by solicitor‑client privilege.

“It seems to me that the lower court ruling would have opened an important breach in class action procedures in Quebec,” said appeal court Justice Jacques Chamberland in an opinion shared by Justice Allan Hilton in Filion v. Quebec (Procureure générale) 2015 QCCA 352. “The appellants argued that the judge of first instance reintroduces, in a roundabout way, the requirement of opting-in, which was rejected by the Quebec legislator. They are not wrong.”

The ruling, hailed by plaintiff’s bar and bemoaned by lawyers who defend class actions, underscores the fundamental tension between Quebec’s propensity to authorize very broad classes and the evidentiary rules around class actions, said Nick Rodrigo, the group leader of the Montreal litigation practice with Davies Ward Phillips & Vineberg LLP. “It’s a fundamental conundrum,” stated Rodrigo. “The courts are sort of caught between two extremes. They want class actions to be open to everybody and see it rightly so as an access to justice issue. But that leads them to authorize class actions that probably should not be authorized in the first place where there could be substantial differences in the situation of each individual member of the class. And the courts have not faced up to the fact on how to deal with these individual issues, without having thousands and thousands of mini-trials after the common issues trial. That would bring the whole justice system to its knees.”

The class action against the Quebec government by Quebec City residents who live near a highway was launched in 2009 and certified by the appeal court in 2011. Their suit alleges that they have suffered harm from the excessive noise emanating from the high-speed thoroughfare. The provincial government sought to examine members of the class pool who did not register with the class action in order to be able to present a full and complete defence. They argued that these members were not protected by solicitor-client privilege or litigation privilege. 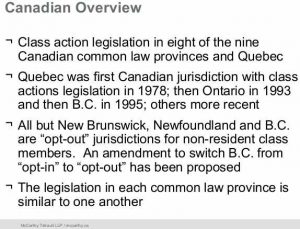 The ruling is important because it prevents the notion of opting-in from taking hold in Quebec, protects all members of the class, and applies a strict application of Article 1019 of the Code of Civil Procedure (Code) with respect to class actions, said Michel Chabot, a Quebec City lawyer who successfully plead the case. Under Article 1019, a party cannot, before the final judgment, submit a member other than a representative or an intervener to an examination on discovery unless the court considers the examination on discovery useful to the adjudication of the questions of law or facts. “Imagine the damage that would have been caused if counsel for the defendants would have been able to speak to members of the class without our presence, without being told that they are not obliged to answer to their questions, without being informed of their rights,” said Chabot. “Now you can imagine why the decision is important.”

Appeal court Justice Dominique Bélanger, who in the past presided over class actions, would have upheld the lower court ruling, noting that the Quebec legislator grants considerable discretion to judges overseeing class actions. She added that in principle a defendant has the right to know the name of the persons who are suing them and seeking monies – a position shared by lawyers who act for class action defendants.

“Class action defendants should have the right to know what they face in order to be able to present a full and complete defence,” noted Jean Saint-Onge, a Montreal lawyer with Lavery, de Billy who has represented major corporations in multijurisdictional and cross border class actions. “I believe that counsel for class action defendants should have easier and more direct access to members of the class. We should be able to examine them but the appeal court has shut the door. “

Rodrigo concurs. He believes that article 1019 of the Code should be read with a lower standard and more flexibly to allow defence counsel to gain access to the kind of information they need to make their case. “The problem that is arising in a lot of class actions that are authorized and that have obvious distinctions between class members is that defendants want a chance to be able to show and highlight these differences but it’s very difficult to do unless you have access to the actual members,” said Rodrigo.

If the lower court ruling was upheld, class actions would be unmanageable, said Normand Painchaud, one of the founders of Sylvestre Fafard Painchaud, a Montreal law firm specializing in class actions. He pointed out that the reason why under article 1019 of the Code a party may not submit a member to an examination on discovery unless the court has given its authorization is to keep class actions manageable and under a tight rein. As it stands, it takes anywhere between 5-to-15 years to resolve class actions. If counsel for class action defendants would have been allowed to examine members, class actions would be unwieldy and untenable, added Painchaud. Moreover, if the lower court ruling was upheld, it would have created subcategories of members, with some members having less rights and benefits than others. “I am pleased by the guidance provided by the court and the protection it grants to all members,” said Painchaud. “As the appeal court points out, a class member is a class member.”