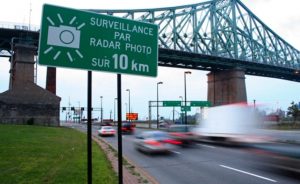 A proposed photo radar and red light camera class action, dismissed by the Quebec Court of Appeal, was doomed to fail because the class representative was convicted of speeding when she chose to pay the fine for speeding, according to class action experts.

By paying the fine, the class action representative was deemed to have plead guilty under article 162 of the Quebec Code of Penal Procedure. The proposed class action therefore was for all intents and purposes a “collateral attack” on the “chose jugée,” the final judgement, held the appeal court.

“Under our public law system one cannot make collateral attacks on final judgments that have been rendered,” noted André Durocher, a Montreal class action lawyer with Fasken Martineau DuMoulin LLP. “That is precisely what the plaintiff was doing. She was questioning the soundness of the final judgment. One cannot do that.”

The class was launched after Montrealer Rivka Moscowitz was caught by photo radar driving above the speed limit, infringing the Quebec Highway Safety Code. Moscowitz then received a statement of offence and offence report, which contained details of the alleged infraction and a photo of the plaintiff’s vehicle taken by the photo radar. Moscowitz denied she was speeding, but she nevertheless paid the $137.00 fine rather than incur the expense of hiring a lawyer to fight the matter before a court.

On December 9, 2016, Moscowitz learned that photo radar evidence was declared inadmissible and deemed to be hearsay in a Court of Quebec ruling issued on November 28, 2016. In Directeur des poursuites criminelles et pénales v. Bove 2016 QCCQ 13829, Justice of the Peace Serge Cimon found that the police officer who had signed the offence report sent to the accused did not personally ascertain the facts to the case. The peace officer attested under oath in the offence report that that the photo radar was in compliance with the regulation that governed the conditions and procedures for the use of photo radar devices. In fact, the police officer did not personally measure, inspect and test the photo radar device as stipulated by the regulation. As a result, the Director of Criminal and Penal Prosecutions (DCPP) could not rely on the offence report as evidence, and the accused was ultimately acquitted.

The Bove decision was not appealed. But due to the ruling, s. 332 of the Quebec Highway Safety Code was modified in May 2018 to specify that a photograph obtained by a photo radar device is admissible in evidence in any penal proceeding and is proof of its accuracy in the absence of proof to the contrary.

Moscowitz then launched a proposed class action, seeking the reimbursement of fines paid and unspecified damages for the “systematic and malicious” use of hearsay evidence to prosecute photo radar and red light offences in Quebec. She argued that DCPP, the Bureau des infractions et amendes, who accepted payment of the fines, and police officers knew or ought to have known that since November 2009 the offence reports contained hearsay evidence that resulted in the unlawful and malicious prosecution of the class. She also argued that the defendants took “advantage” of the fact that it is more expensive to hire an attorney than to contest the statement of offence.

In October 2018 Quebec Superior Court Justice Silvana Conte refused to certify the class action. Justice Conte held that there were no allegations in the application that could support a claim in respect of the red light camera infractions. She also held that Moscowitz could not demonstrate an arguable case for malicious prosecution, pointing out that it failed to meet the test set out by the Supreme Court of Canada in Nelles c. Ontario, [1989] 2 R.C.S. 170. Under Nelles, in order for a plaintiff to establish an arguable case for malicious prosecution he must demonstrate among other things that the proceedings ended in his favour. That was not the case with Moscowitz as she was convicted of speeding.

In a 21-page ruling in Moscowitz c. Procureure générale du Québec 2020 QCCA 412, the Quebec Court of Appeal upheld the lower court decision. It dismissed arguments raised by the class action plaintiff that the matter in hand was analogous to the Quebec Superior Court decision in Kavanaght c. Montréal (Ville de) 2011 QCCS 4830 and the more recent SCC decision in Kosoian v. Société de transport de Montréal, 2019 SCC 59. The class action, pointed out the appeal court, does not involve an arrest or improper detention for which damages may be claimed and awarded even if the claimant is subsequently convicted of the offence leading to the arrest or detention as was the case in Kavanaght. Nor does the class action involve an arrest or detention based on a non-existent offence like in Kosoian.

“Rather, the contemplated class action derives from the inadmissibility of a piece of evidence and the measures taken by authorities to prevent a court decision on this issue from being rendered,” held Quebec Court of Appeal Justice Robert Mainville.

“However it is clear that this action constitutes a collateral attack on the effects of the guilty pleas and guilty verdicts at issue by way of an action for damages,” added Justice Mainville.

The appeal court also noted that Moscowitz is not seeking to attack the validity of the judgment that convicted her of speeding. Nor is the class action representative seeking to withdraw her guilty plea. Instead she is seeking damages, including the reimbursement of the fine she paid, following her guilty plea. A class action under the Quebec Civil Code of Procedure cannot be used to “indirectly attack” final judgments in penal matters, noted Justice Mainville.

“People would have had to contest the fine, and then it would have been possible to pursue the allegations,” said Bruce Johnston, a Montreal class action lawyer with Trudel Johnston & Lésperance LLP. “But by paying the fine, they plead guilty. And you cannot afterwards seek to reverse the guilty plea. One cannot indirectly attack a final judgment.”

Class action lawyers declined to comment. They intend to file leave to appeal before the nation’s highest court.