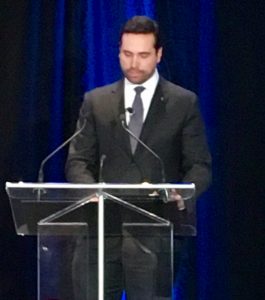 Naysayers, and there are always many, have described the move as either a cynical political move or a gaffe. Lu Chan Khuong, former Bar president who was soundly beaten by Grondin in the recent election, said that she was disappointed by his gesture. “A donation is not a reduction in salary, and donations, we all do it,” Khuong told a French-language site. “It’s easy to be generous with the monies of others.” She would have rather have seen Grondin slash member fees.

In the meantime, change is taking place at the Quebec Bar. Transparency, for one, is now the new buzzword. The Board of Directors met recently and ostensibly for the first time published all documents stemming from the meeting.

The Quebec Bar is also looking for a chief of staff for the new president. Details can be found here.

The President’s intention to donate his salary to worthy causes is no doubt commendable. However it will take more than the integrity of one person to make a difference.