When Dyane Perreault came across a study that revealed that Quebecers were baffled by the differences between legal aid, legal assistance and legal expense insurance, she immediately felt she had fodder for an article aimed at the general public.

But shortly after broaching the idea with Protégez-Vous, an independent Quebec non-profit consumer organization whose widely-read and respected flagship publication has 35,000 subscribers, the head of member services for the Barreau du  Québec realized that the project was going to be larger and more time-consuming than originally intended. Demonstrating once again a flair for delving into new unchartered frontiers for Canadian law societies, the short story Perrault had in mind evolved into a 72-page magazine aimed at lifting the mysteries surrounding the Quebec judicial system.

“It was a small idea that grew big – that tends to happen to me,” said Perreault with a chuckle. “While my idea was originally to demystify the concepts around legal aid, legal assistance and legal insurance, it then dawned on me that in fact the whole judiciary was a complex subject for the general public.”

It also falls in line with the Barreau’s clear-cut strategy of broadening its mandate to protect the public by enthusiastically playing an active role in the media in a bid to plainly lay bare the complexities of the legal world to the general public. The Barreau, in association with the French-language public educational television network Télé-Québec, recently launched a television series on a popular French-language cable station called Canal Savoir. Entitled “Le Droit de Savoir,” a play on words that literally means “right to know,” the show boasts being the only television series – at least in Quebec – devoted to legal information. On air as of September 17, the television show will broadcast 13 episodes of 27 minutes each on Thursday evenings. Each episode will be re-broadcast four times a week as well as be available on the show’s website.

Aimed at the general public, the show deals with topics ranging from the rights and responsibilities of property owners and the legal myths surrounding common-law unions to the legal abc’s of launching a business and the role and responsibilities of professional corporations, all of which is  interspersed with legal tidbits and profiles of Quebec lawyers who made a mark in their practice.

“The Barreau was working on the television series, and I thought it would have been interesting to have in print a vehicle that people can keep at home and use when needed,” said Perreault. “The Barreau’s first mandate is to protect the public, and that involves providing information. We will never do enough. We have to work on prevention. We have to help people understand their rights and obligations.”

Entitled The Practical Guide to Access to Justice, the affordable French-language periodical — selling for $9.95 — is a no-nonsense publication that provides information over available legal resources while shedding light on a wide gamut of topics, from the functioning of Quebec’s court system to the nitty-gritty of client-lawyer relationships to alternative modes of dispute resolution. In fact, the guide even goes so far as to devote a page or two to the growing phenomena of self-representation, but not without asking tough questions for those considering the treacherous route.

Published by Protégez-Vous as part of its collection of special issues, the guide was penned by a team of 15 lawyers, some of whom work for the Barreau and others from private practice who volunteered. The project’s most daunting challenge, which really got its wheels rolling last January, was to publish a guide written in clear, concise fashion easily understood by laymen, stripped of any legalese.

“We knew the guide had to be written in simple, easy-to-understand language,” said Perreault. “Throughout the whole process, when writing and editing, I was constantly being challenged to clearly spell out what we wanted to say. It was really tough.”

This is not Protégez-Vous’ first foray into publishing guides that tackle the law. Three years ago it published a guide,  Être parent, tout un contrat! (Being a parent, quite a contract!), that spelled out the legal obligations and rights of parents and children while dealing with issues such as birth, adoption, parental leave and separation. A collaborative effort with Éducaloi, a non-profit organization whose mandate is to inform Quebecers of their rights and obligations by providing legal information in vernacular, the guide sold more than 16,000 copies. In 2007, Protégez-Vous worked again with Éducaloi to produce a guide on inheritance that picked the brains of lawyers and notaries as well as insurers and financial planners. Nearly 19,000 copies were sold, and a second edition is now being planned. Last year the non-profit organization published yet another guide called “La vie à deux” (or Living together). Dealing with the legal environment surrounding the life of a couple, almost 12,500 copies of the guide were sold. 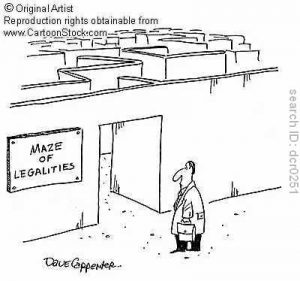 More legal guides are in the works, thanks to their popularity and demand, said Sylvain Masse, the director of published media at Protégez-Vous, though he refused to reveal what subjects the future legal guides will broach. “Consumers are preoccupied with issues involving law,” said Masse. “While we deal with legal issues in our magazine, the guides offer us the possibility of dealing with complex subjects rather in-depth that touch the general public. That’s what interests our partners also. We have a well-recognized brand, and by associating with partners who have an expertise, we are able to reach readers that we otherwise would not reach.”

Indeed, that is part of the reason why Éducaloi has collaborated with Protégez-Vous in the past and will continue to do so in the future, said Geneviève Fortin, a founding member and the assistant executive director of Éducaloi.

“We are two organizations that share similar  values and complimentary expertise,” explained Fortin, adding that it is now negotiating with the consumer organization to write two more legal guides. “They hired us for our ability to render legal issues in plain language while they took care of everything dealing with the publication of the guides. By linking up with them, Éducaloi has been able to benefit from their network and notoriety. It really is a win-win situation for both organizations.”

Launched in 1998 from Fortin’s modest apartment, Éducaloi is thriving. Its website now receives 1.5 million hits annually, and a growing number of legal organizations are turning towards the 18-member staff, 14 of whom are lawyers, to convert their documents and websites into plain language. Now in the midst of putting the final touches of converting on-line applications for Small Claims Court in vernacular, Éducaloi is also revamping the content of the Conseil de la Magistrature’s website, or Quebec’s provincial magistrates’ council, in simple and clear language.

In the meantime, Perreault hopes that other law societies will follow the Barreau’s lead.

“Perhaps our efforts will encourage other law societies to the same thing,” remarked Perreault. “It would also respond to a growing need of the public.”