Stung by criticism that it has at times acted too late to stop unsound practices, Quebec’s financial watchdog recently warned consumers to be wary of peer-to-peer insurance offerings even though the digital sharing platform has yet to make a formal entrance in Canadian soil. 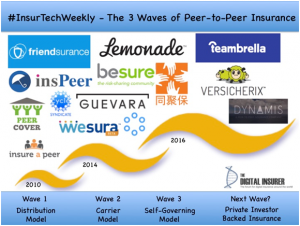 he peer-to-peer (P2P) insurance model has begun making inroads in Europe with the likes of Friendsurance of Germany, Guevera of the United Kingdom, and insPeer of France attempting to disrupt the traditional insurance industry in the same way that Uber has shaken up the taxi industry and Airbnb the hospitality sector. South of the border, New York-based start-up peer-to-peer insurance carrier Lemonade made headlines after it announced it raised US$13 million in initial funding and a line-up of  global reinsurance partners, including Berkshire Hathaway and Lloyd’s of London syndicates. Closer to home, Calgary-based Besurance Corp. intends to launch its P2P insurance platform during the course of the year.

P2P insurance, a throwback to a bygone era when farmers and shipping magnates formed mutual organizations to share in their losses and gains, is a form of risk sharing that leverages social network connections between small groups of people to cover specific risks. Typically, a premium is paid by the group members and pooled, and claims are paid out of the pool. Proponents claim that it potentially increases the incentive for members to reduce fraud and risk-taking behaviour while generate savings on administration costs.

“It’s kind of like the old cooperative of ages ago where people pooled their money to cover risks,” explained Michelle Priest, a spokesperson for besure, the patent pending P2P risk sharing platform that Besurance will be using. “We just provide the platform to help facilitate their coverage needs. We are working with some re-insurers for larger coverage.”

But Quebec’s financial regulator, the Autorité des marchés financiers (AMF), is “urging” Quebecers to be “cautious” when purchasing P2P insurance products or services. While in favour of the development of new financial technologies, the AMF warns consumers that they could be exposed to losses that would not be covered under current compensation schemes. “If unfortunately for whatever reason, be it that the pool faces claims more than expected or the pool no longer has the financial means to pay claims, consumers will have not have a recourse,” said Sylvain Théberge, the AMF spokesman, adding that the financial watchdog will continue to monitor the situation. “As regulators it is our role to ensure that consumers have all the information available to them to be able to make a well-informed decision.”

The Chambre de l’assurance de dommages (ChAD), a Quebec regulatory body that oversees the province’s 14,500 damage insurance agents and brokers and claims adjusters, shares the AMF’s assessment over the risks that P2P insurance pose. “New technological platforms may facilitate matters for consumers but they can represent a major risk for the protection of the public,” said ChAD spokesperson Lisane Blanchard.

ChAD is calling on the Quebec government to review its laws and regulations to take into account the rapidly burgeoning sharing economy. “Authorities no longer have the choice but to adapt to the new technologies,” added Blanchard. “The sharing economy is no longer a rare or marginal phenomenon but it is here to stay.”

The Quebec government, following the publication last year of a controversial report by the provincial Ministry of Finance that asserts that the current system governing the distribution of financial products and services in the province needs to be reviewed because it risks becoming inadequate and out-dated, is in fact reviewing legislation, noted Annick Demers, a regulatory compliance expert and counsel with Blake, Cassels & Graydon LLP in Montreal. While the report makes no mention of P2P risk sharing platforms, the report recommends putting in place a “flexible legal framework” that will enable insurers to offer their products online. Demers wouldn’t be surprised if the Quebec government ends up being divided over how to deal P2P insurance in the same way it is over Uber, the popular ride-sharing service.

“A bit like Uber, these P2P insurance companies are disruptors and are proposing to offer a service that is less expensive than traditional players, except that traditional players must conform to legislation that is very robust, legislation that has as one of its principal objectives the protection of the public,” said Demers. In that vein, the AMF likely “sent a message to P2P insurance companies to say that we are keeping an eye on you and may end up taking necessary measures,” added Demers. 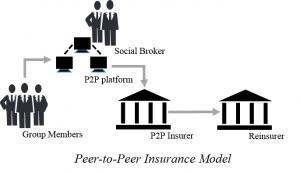 Like in Quebec, P2P insurance is not specifically regulated in Ontario, noted Malon Edwards, a spokesman with the Financial Services Commission of Ontario (FSCO), the provincial regulator of the insurance sector. At present all insurance companies and intermediaries such as insurance agents and brokers in Ontario must be licenced.

“FSCO is supportive of new technologies and innovation introduced in Ontario and the insurance market, like usage-based insurance, as long as the services offered are regulated and are not a detriment to consumers,” said Edwards. “Any new insurance models may require legislation or regulation that must be proposed and approved by the Ontario government.”

The Insurance Bureau of Canada (IBC), the national industry association representing Canada’s private home, auto and business insurers, welcomes any new entrant into the marketplace but so long as the regulatory “playing field” is level for everyone. “We are at the very early stages of how technology, social networks and customer demand may change the insurance marketplace in Canada,” remarked David McGown, IBC’s senior vice-president of strategic initiatives. “Within that frame, the importance of level playing fields is critically important. You don’t ever want a regulator to get in the way or use regulation to stifle innovation. Regulation and legislation should be technologically agnostic.”

Canadian insurers are paying close attention to the latest developments and are beginning to partner with technology firms to figure out how to apply “investment dollars and technology” to improve the way the business is run and to improve client experience, added McGown.

“The fundamental nature of regulation means that we don’t necessarily have folks in the marketplace trying to manufacture and sell more than apply technology to the current environment,” said McGown. “We’re in early days.”