In a major victory for international retailers such as Best Buy, Costco, Gap, and Wal-Mart, the Quebec Court of Appeal confirmed that the Charter of the French Language allows for the use of non-French trademarks on storefront or public signs and advertising in the province, so long as no equivalent French trademark has been registered.

A five-judge Court of Appeal panel held, without even hearing arguments from retailers or interveners, that the Charter and its regulations clearly allow the use of a trademark in a language other than French, even if the trademark name is being used as a business name.

Shortly after the politically sensitive ruling, the Quebec government announced that it intends to introduce this fall regulations that will force retailers to add a French slogan, generic word or description of the product or service they are marketing.

“Our government wants to act so the outdoor signage of companies reflects the French face of Quebec,” said Hélène David, the minister responsible for the Charter. “In fact, it is possible to assure the visibility of French without altering the original trademark. It is about common courtesy, of politeness and especially the collective assurance that the francophone face (of Quebec) be preserved.”

But skeptics doubt that the Quebec government will launch a politically charged debate to amend the Charter. “I don’t think the current government wants to open this Pandora’s box,” remarked François Guay, a partner with Smart & Biggar | Fetherstonhaugh, who represented the International Trademark Association who were interveners in the case. “What the Office québécois de la langue française (OQLF) wants to do is create a unique situation in the world. But their position is legally untenable in all regards.”

The knotty issue came to the fore after the OQFL, the province’s language agency, adopted about five years ago a different interpretation of the Charter and launched a campaign known as “A Trade-mark to Respect the Law.” In Quebec, the general rule under the Charter is that public signs, posters, and commercial advertising must be displayed in French. However, the Charter does provide with some exceptions. Under the Regulation Respecting the Language of Commerce and Business, a recognized trademark within the meaning of Canada’s Trade-marks Act may appear exclusively on public signage in a language other than French. But in 2010, the OQFL took the position that any business that used a non-French trademark on commercial advertising and public signs, including storefront signs, needed to comply with the rules applicable to business names, which requires the use addition of a general French descriptive word. The OQFL’s campaign suggested that failure to comply with its new interpretation constituted a violation of the Charter, and businesses exposed themselves to monetary and penal sanctions. Businesses who failed to comply also faced the potential suspension of the so-called francization certificates, which are granted by OQLF to demonstrate that a business has met the Charter’s linguistic requirements.

“The OQLF’s new position worried the business community because it would have led to a lot of changes in their practices,” noted Caroline Jonnaert, a Montreal intellectual property lawyer with Legault Joly Thiffault Avocats. “If the OQLF’s position had been maintained, it would have led to changes in logos, publicity, signages – all of which would engendered a lot of costs.” 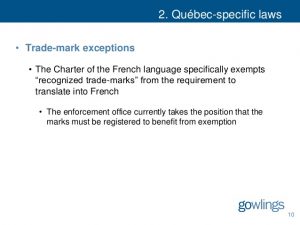 A number of major retailers, supported by the Retail Council of Canada and the International Trademark Association, contested before Quebec Superior Court the OQFL’s interpretation. The Quebec Superior Court ruled in favour of the retailers by declaring that that the trademark exception applies to the use of trademarks on public signs, and that the public display of non-French trademark does not violate the Charter.

In a brief 11-page “rather technical” unanimous ruling, the appeal court held that the Charter does not require a trademark used on a storefront sign to be accompanied by a generic French term because of the exception under subsection 58(3) of the Charter, which empowers the government to grant exceptions from the principle of posting French (or predominantly French) signs in public. The government enacted such an exception in section 25 of the Regulation. Under subsection 25(4) of the Regulation, trademarks “exclusively” in a language other than French are permitted to be posted in public when there is no French equivalent, noted the appeal court in Magasins Best Buy ltée c. Québec (Procureur général), 2014 QCCS 1427.

“The Court of Appeal did a really good straightforward analysis and ruled that no matter how you look at the Charter and how you try to interpret it, it remains that you can use English trademarks on your storefront signage,” noted Brigitte Chan, a trademark expert with Bereskin & Parr LLP in Montreal. “This is important because for decades business owners were being told that they were compliant with the Charter, and it was a little bit unfair for the OQFL to change its interpretation of the Charter.”

But while the appeal court also noted that its finding is in line with the interpretation that the OQLF had given to the Charter before 2010, it made a point of stating that that the promotion and protection of the French language in Quebec constitutes a “recognized imperative” responding to a “real need.” The appeal court added that many might wish for the retailers to “alter their practice and post differently” but that does not mean the actual text of the Charter and Regulations compels them to, “and in fact does not oblige them to.”

“It’s a tacit way of saying that it is possible that politically speaking it is desirable that the trademarks be translated into French,” said Benoît Pelletier, a law professor at the University of Ottawa and former Quebec minister. “But whatever the mandate of the Charter, there is a unescapable section of the law. Regardless of the judge’s opinions over the mandate of the Charter, of its vocation, and even if it was socially desirable, it remains that section 25 of the Regulation imposes on them a way of looking at things that is unavoidable.”

Much was at stake, argues Guay. While major retailers have the financial means to adapt their trademarks if need be, small and medium enterprises would struggle. Many, if not most, big enterprises have voluntarily adjusted their trademark signs, he points out. Starbucks is known as or Café Starbucks in Quebec while Staples goes by the name of Bureau en Gros in the province. “Trademarks are rather expensive,” said Guay. “It’s not a simple formality to get one. It is a rather complex matter. It can take up anywhere between 18-24 months. So it’s not insignificant as an investment.”

Chan concurs. Thanks to globalization, businesses want to be recognized under a particular trademark. “That’s the whole point of trademarks so from a marketing perspective companies want that global recognition.”