Days after the new president of the Quebec legal society said that the landmark Jordan ruling could “do us good if we could solve the problem,” Quebec Justice Minister Stephanie Vallée called on the federal government yet again to quickly appoint 10 new Superior Court justices in the province.

Despite significant investments over the past six months by the Quebec government to curb delays in the criminal justice system, Quebec is still struggling as the number of Jordan-related requests for a stay of proceedings keeps on surging. The Quebec Director of criminal and penal prosecutions (DPCP) revealed that there were 684 Jordan applications as of March 23, 2017, a figure that has grown to 895 as of late May.

While waiting for Ottawa to act, Vallée announced yet more new investments and programs aimed at diminishing judicial delays, the third series of measures since December 2016. Just before last Christmas, Quebec announced it was going to invest $175.2 million over the next four years to recruit new judges, prosecutors and support staff. It has kept its word. Over the past few months the Quebec government appointed 16 new judges to the Court of Quebec, hired 66 more Crown prosecutors, and nearly 300 support staff. 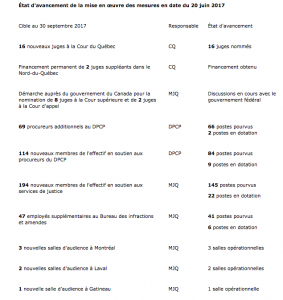 More new measures were revealed yesterday. The Quebec government will invest an additional $9 million to hire 20 new legal aid lawyers and 27 support staff as nearly 75 per cent of criminal cases and 25 per cent of penal cases involve legal aid.

The provincial government will also try to alleviate the clogged criminal justice system by dejudicializing certain minor infractions through an 18-month pilot project in courthouses in Joliette, Saguenay and Sherbrooke. The 18-month pilot program will introduce measures to deal with offenses non-judicially by replacing incarceration with community service, making amends to victims or therapy.

In another effort to slash the amount of time cases take to filter through the courts, the Quebec government also passed Bill 38 in mid-June. Bill 138 amends the Quebec Code of Penal Procedure to make it possible for proceedings to be tried and judgment rendered by a judge of any judicial district other than that in which the proceedings were instituted when the defendant enters a not guilty plea. Bill 138 also amends the Quebec Courts of Justice Act to clarify how concurrent jurisdiction is to be exercised.

But at least one criminal lawyer believes that Bill 138 will have a minimal impact as it deals only with penal matters, which falls under the jurisdiction of the province. “By default it will have a limited impact on case management,” noted Quebec City criminal lawyer Julien Grégoire. 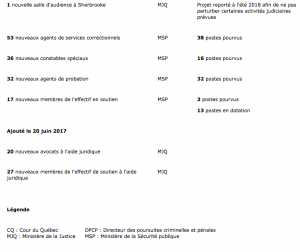 In spite of the new investments and measures, Vallée believes that additional Superior Court judges are still needed to considerably shrink the number of outstanding cases. “It would represent about 35 trials before a jury that would have been completed or on the way to being completed,” Vallée said. “So every day that passes counts.”

That represents a remarkable turnaround for the Quebec justice minister. Last October when she introduced action plan that essentially calls for an end to the “culture of delays” that plagues the criminal court system, Vallée said that it was above all necessary to “optimize resources.” Only when the Quebec Superior Court Chief Justice and his confrères spoke of a “crisis” did she eventually relent and concede that new investments and resources were required.

The Supreme Court of Canada recently sent a very clear message that it won’t back down from the trial timelines set last year by the Jordan ruling. In a unanimous decision in R v. Cody 2017 SCC 31 made it plain that it will not yield to provincial attorneys general struggling with the Jordan timelines.

“A number of the provincial Attorneys General who intervened in this matter asked this court to modify the Jordan framework to provide for more flexibility in deducting and justifying delay,” the Court found. “But Jordan was released a year ago. Like any of this Court’s precedents, it must be followed and cannot be lightly discarded or over-ruled.

“The Jordan framework now governs the s. 11 (b) analysis and, properly applied, already supplied, already provides sufficient flexibility and accounts for the transitional period of time that is required for the criminal justice system to adapt.”

In the meantime, the city of Montreal also announced that it will hire four new prosecutors and three support staff to deal with the delays at an annual cost of $880,000.