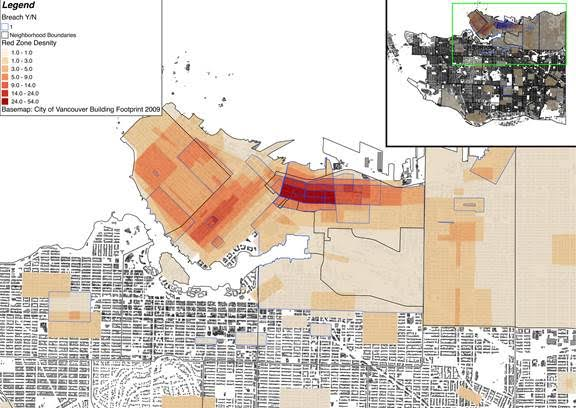 “Red zones ” or “no-go” orders, conditions of release imposed by police or the courts in bail or probation orders that prohibit an individual from entering or being found within a specific place or area, have become increasingly pervasive but are costly, ineffective and violate people’s rights, concludes a new study.

Contrary to prescriptions of the Criminal Code requiring unconditional release, 97 per cent of all bail orders issued in Vancouver between 2005 and 2012 included conditions of release, with 53 per cent of all bail orders issued for drug offences included a red zone, mostly concentrated in Downtown Eastside, “the poorest postal code in Canada” and home to a visible homeless population, high rates of mental illness, and high rates of HIV/AIDS, according to the study conducted by researchers from the University of Ottawa, Simon Fraser University and the Université de Montréal. The researchers have also studied the phenomena in Montreal, Ottawa and Toronto. Its results will be published at a later date.

“Legal actors are pursuing legitimate objectives such as preventing crime and trying to promote social reintegration of offenders in the case of probation orders,” said Marie-Eve Sylvestre, the report’s lead researcher and a law professor at the University of Ottawa. “But they are unaware of how inefficient the system is and how little it achieves its objectives in terms of preventing crime.”

The study asserts that the number of conditions (more than four) and the length of court orders (longer than 190 days) have a “statistically significant positive impact” on the likelihood that a person will breach the court order. Analyzing a data set that contained 30,505 distinct accused individuals, nearly 95,000 distinct court cases and slightly more than 101,000 orders that generated more than 528,000 conditions, the study revealed that bail orders included on average 4.39 conditions while probation and conditional sentence orders respectively comprised 6.9 and 11.3 conditions in total. Area restrictions and no go orders represent 20 per cent of all the conditions imposed.

These conditions end up setting up marginalized people to fail as the conditions they are expected to follow are “unrealistic” given that resources such as access to food and shelter and health and social services are located in red zones like Vancouver’s Downtown Eastside, said Sylvestre. This in turn winds up putting more pressure on the criminal justice system. According to Statistics Canada, about one in ten Criminal Code offences Canada-wide reported by the police in 2014 was an administration of justice offence (AJO) in which the AJO was the most serious offence involved in the incident in 75 per cent of the cases. Moreover, failure to comply with conditions and breach of probation represented 79 per cent of all police-reported AJOs committed in 2014.

“The report supports the anecdotal experience of the clients our members represent,” said Michael Lacy, the president of the Criminal Lawyers’ Association. “Persons who are drug addicted and/or otherwise marginalized are often either denied release or subjected to unduly restrictive bail conditions that are not reasonable limits imposed on their liberty, particularly in circumstances where they are presumed innocent.”

Imposing conditions such as no-go zones comes at a cost. Administration of justice offences in Canada cost approximately $730 million in 2009 to the Canadian justice system, including $239 million in police costs, $296 million in corrections, and $204 million in court, prosecution and legal aid costs, according to a study conducted by the Department of Justice.

“That was a very important finding in our study,” said Sylvestre. “It is not only that conditions have a very dramatic impact on people subjected to them, but it is also in a sense dramatic for the justice system itself because all these conditions are generating so many breaches that people keep coming back to the criminal justice system through a revolving door phenomenon, creating more work for the courts. AJOs make up 40 per cent of all the cases that are heard by BC criminal courts in the last year, which is really appalling and which shows that this approach is not working.”

The use of red zones and other conditions of release also have the potential to infringe multiple rights violations, including freedom of association, mobility rights, the right to life, security and liberty as well as the presumption of innocence and the right to a reasonable bail, according to the report.

But they are rarely challenged. Besides the existence of numerous legal technicalities that prevent individuals from challenging conditions of release, alleged offenders often want to be released at any cost, points out Sylvestre. Moreover, prosecutors are “not always in a position to assess the significance of spatial restrictions imposed by the police, to whom they tend to defer for their knowledge of where the ‘shifting hot spots’ are located,” said the 84-page report entitled “Red Zones and other Spatial Conditions of Release Imposed on Marginalized People in Vancouver.”

There is a “pressing need” for the current law of bail to be strictly followed, said Sylvestre. Unconditional release should be the norm for granting release, as required by the Criminal Code. The report is also hoping that the Supreme Court of Canada’s decision in R. v. Antic 2017 SCC 27 will send an important message to the lower courts and change their practices.

“The SCC in R. v. Antic resuscitated the ladder principle in the Criminal Code as it relates to release orders,” noted Lacy. “This study is further evidence as to why we need to ensure that the culture of bail and release conditions is reconsidered, particularly as it relates to the most vulnerable.”

Changes to the Criminal Code should also be introduced, in particular s. 515, to clarify the legitimate objective of bail and to better reflect the ladder principle, said the report. And the police should be required to justify the imposition of conditions, added Sylvestre.

“People are already looking at these questions,” said Sylvestre. “I hope this report provides more data for them to be able to have those conversations. It’s not only about reforming the law but also changing the practices of administration of justice.”