Tobacco companies suffered a second legal setback in less than a month after the Quebec Court of Appeal ordered two cigarette makers to set aside nearly $1 billion in security, the largest ever in the province’s history, to ensure that money is available to pay victims who won a landmark $15.5 billion class action lawsuit earlier this year.

In a ruling that clarifies the exceptional circumstances under which securities can be ordered, the appeal court ordered Imperial Tobacco Canada Ltd. to pay $758 million in seven quarterly instalments and Rothmans, Benson & Hedges Inc. $226 million in six quarterly instalments, beginning in December until next year. If the tobacco manufacturers are successful in having the $15.5 billion judgement overturned on appeal, the security will be returned to them. If not, it will be available for distribution to victims who launched the class action suit. (A motion for security was not sought against JTI-MacDonald Corp. because one of the lawyers became ill).

“It’s a very significant ruling because it ensures that should the victims win on appeal there will be funds immediately available for the victims,” noted Rob Cunningham, a lawyer and senior policy analyst for the Canadian Cancer Society in Ottawa. “It also sends a very important message to tobacco companies, and that is, that they can’t get away with anything that they want. They just can’t be depleting their massive bank accounts to deprive victims of compensation should they win.”

In late September, approximately three months after a precedent-setting ruling that ordered three leading Canadian tobacco companies to pay $15.5 billion in moral and punitive damages to Quebec smokers, the Quebec appeal court found that while the province’s healthcare recovery legislation does deprive tobacco companies some traditional means of defence, it does not affect their right to a trial.

Last May, Quebec Superior Court Justice Brian Riordan found that Canadian tobacco companies committed four separate faults under Quebec law and ordered them to pay what is believed to be the biggest class action lawsuit ever in Canada. The ruling, which marked the first time tobacco companies have gone to trial in a civil suit in this country, also ordered the companies to make an initial aggregate deposit of $1.13 billion in the 60 days following the ruling regardless of an appeal because “it is high time that the companies started to pay for their sins” and “high time” for the plaintiffs to receive some relief from the “gargantuan” financial burden of bringing the tobacco companies to justice, said Justice Riordan in Létourneau c. JTI-MacDonald Corp. 2015 QCCS 2382.

But in July, the Quebec appeal court cancelled the provisional execution that ordered the $1.13 billion initial deposit because it would cause serious financial prejudice to the tobacco companies, could have harmed their ability to appeal, and would have been all but impossible to recoup the monies from class members if they succeeded on appeal. “The potential necessity of seeking reimbursement of $10,000 from each of the 100,000 class members is by any objective standard a prejudice that cannot be ignored,” said the appeal court in a unanimous decision in Imperial Tobacco Canada Ltd. c. Conseil Québécois sur le tabac et la santé 2015 QCCA 1224. But the appeal court also gave a rather obvious hint that there are other ways that victims could obtain at least partial payment. “This is not to say however that such facts and arguments could not give rise to other recourses or orders,” added the appeal court.

The Montreal class representing the victims paid heed. They argued that a $5 billion security was necessary because the manufacturers would — in the face of defeat — file for bankruptcy. In the meantime, the companies were trying to make themselves “judgment proof” by diverting all their profits to their parent companies, argued Philippe Trudel, one of the Montreal class action lawyers. 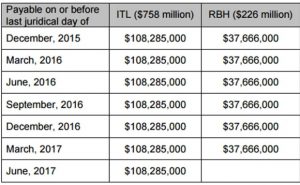 Quebec appeal court Justice Mark Schrager partially complied. He noted that the granting of security is an exceptional remedy, and is a matter of discretion. Under article 497 of the Code of Civil Procedure, an appeal regularly suspends the execution of a judgment. However, an appeal court judge may for a “special reason” order the appellant to furnish security to guarantee in whole or in part the payment of the costs of appeal and the amount of the condemnation if the ruling is upheld. The correct criterion for the exercise of the discretion is whether in the absence of security, the execution of the judgment would be in jeopardy, noted Justice Schrager. While insolvency may constitute a special reason as would fraudulent behaviour, neither is the criterion per se, added Justice Schrager. And contrary to what the tobacco companies asserted, it is not necessary for “clear and precise facts” underlying the security to have occurred since the judgment of first instance. “While the existence prior to judgment of the facts invoked may have been noted in certain decisions of my colleagues, no judgments has asserted the existence of such a hard and fast rule,” said Justice Schrager.

“When a security is granted one has to look at all of the facts of the case, including those that took place before the judgment of first instance,” said former Quebec appeal court justice André Rochon, now counsel with Prévost Fortin D’Aoust Attorneys in Montreal. “It’s not true that to order a security only the facts that took place between the judgment of first instance and pre-appeal must be analysed. One has to look at all the facts – and this is the first time that a decision has clarified that.”

After looking at all the facts, Justice Schrager concluded that both tobacco companies structured their business affairs in a manner that “drastically, if not completely,” reduces their exposure to “satisfy any substantial condemnation that might be made against them in this litigation.” Imperial Tobacco earned $535 million from operations in 2014 and paid $334 million in dividends to its parent, British American Tobacco Corp. Rothmans adopted the same strategy. From 2008 to 2013, its average annual earnings were approximately $450 million, and it paid $300 million annually on average to its parent Phillip Morris International, Neither of the firms, even after the landmark class action ruling, set aside funds to pay the condemnation. One tobacco lawyer characterized the situation as “heads I win, tails you lose.” Those facts gave the appeal court the “special reason” needed to order the security, particularly since under Quebec law a judgment pending appeal benefits from a presumption of validity, said Rochon.

“I do not question Appellants’ right to appeal but neither can I stand idly by while Appellants pursue an appeal which will benefit them if they win but which will not operate to their detriment if they lose,” said Justice Schrager. “Continuing the practice of distributing earnings out-of-jurisdiction at this point is at best disingenuous and at worst, bad faith.”

According to Trudel, the appeal court sent a strong message to companies contemplating dispatching their profits to their parent companies in order to be “judgment proof” when they lose a decision. “When a ruling is issued, and it is a ruling presumed to be valid, companies cannot act like they have in the past,” said Trudel. “They cannot send their profits to their parent companies located in a foreign country while you have a ruling against you, a ruling that is presumed to be valid. This precedent-setting finding, I believe, will have an impact on other similar cases.”