A ruling by the Supreme Court of Canada that dismissed a proposed securities class action against a Montreal pharmaceutical company will likely make it more difficult for investors to launch these kinds of lawsuits in the future, say class action and securities lawyers.

In a ruling that marked the first time the nation’s highest court examined a case involving secondary securities market liability regimes, the SCC held that in order for plaintiffs to be able to proceed with a securities class action they must provide courts with “sufficient evidence” to show a “realistic chance” of success.

“The threshold should be more than a ‘speed bump,’” said Justice Rosalie Abella in a 7-0 decision in Theratechnologies Inc. v. 121851 Canada, 2015 SCC 18. “What is required is sufficient evidence to persuade the court that there is a reasonable possibility that the action will be resolved in the claimant’s favour.”

Many provinces, including Quebec, Ontario, Alberta, and British Columbia, introduced in the previous decade amendments to provincial securities statutes to allow plaintiffs to sue reporting issuers for alleged secondary market misrepresentation such as failing to report a material change. But in order to eliminate groundless so-called “strike suits,” plaintiffs under most provinces’ securities legislation must obtain leave or a judicial green light from the court before bringing a secondary market misrepresentation claim. Since then, the courts have been grappling with the screening mechanism or ground rules for securities class actions.

Theratechnologies, a pharmaceutical company listed in the Toronto Stock Exchange, became embroiled in a securities class action after it applied to the U.S. Food and Drug Administration for a new drug aimed at reducing excess abdominal fat among HIV patients. As part of its approval process, the FDA referred questions about the drug, including possible side effects, to an advisory board. The FDA published the questions on its website. When analysts published reports on this development, the company’s shares dropped by more than 50 per cent. Two days later, the FDA advisory committee unanimously voted in favour of approving the new drug application, and Theratechnologies’ share price soon recovered. 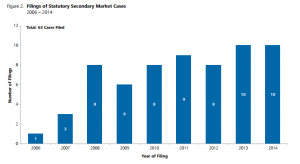 A class action was then brought under the Quebec Securities Act (Act) over the drop of the share price. The suit, launched on behalf of shareholders by a numbered holding company that held stock in Theratechnologies, claimed that the possible side effects of the medication and the FDA’s questions about its side effects constituted a material change in the business, operations, or capital of Theratechnologies and that it had failed to disclose that change.

Lower courts in Quebec had given the go-ahead to the securities class action but the Supreme Court overruled them. Under s.225.4 of the Act, in order for an action to be authorized the action must be filed in good faith and there must be a reasonable possibility that it will be resolved in favour of the plaintiff. While the SCC agreed with the Quebec Court of Appeal that the “reasonable possibility” criterion sets out a higher standard than the general threshold for the authorization of a common law class action, the SCC held that the threshold had not been met in this case. The SCC held that the FDA’s questions were a routine aspect of the approval process, and not a material change in the company’s business. A case with a realistic chance of success requires the claimant to offer both a plausible analysis of the applicable legislative provisions and some credible evidence in support of the claim, without mushrooming into a mini-trial, according to the SCC. 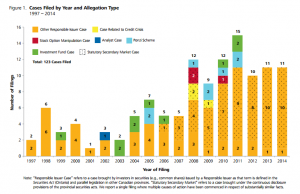 “The test is absolutely higher following the SCC ruling,” said Garth Myers, class action counsel with Koskie Minsky LLP in Toronto. “There are many outstanding cases in Ontario and across the country relating to misrepresentations in issuer public disclosure that are the subject of many class actions such as the Theratechnologies case. So courts across the country will be looking to this decision for guidance on the appropriate test to apply in similar circumstances.” But because the application of s.225.4 of the Act is still novel, it remains to be seen how the lower courts will apply the SCC’s interpretation of the “reasonable possibility” criterion, added Myers.

Since the SCC ruling raises the bar for plaintiffs both in Quebec and the rest of Canada to obtain authorization from the courts, it will likely be more difficult for investors to launch securities class action suits, according to Pierre Lefebvre, a Montreal lawyer with Fasken Martineau DuMoulin LLP who successfully represented Theratechnologies in the case. “Without conducting a mini-trial, as the SCC put it, plaintiffs will have to demonstrate to the court that they have a reasonable chance of success which means that they will have to have present credible evidence to convince a judge,” said Lefebvre. “They will have to work much harder to find credible evidence and to establish a good case. That will force plaintiffs to think twice before launching such an action.”

But Dimitri Lascaris, a plaintiffs-side securities class action lawyer with Siskinds LLP who acted for a Quebec investors’ rights group that intervened in the Theratechnologies case, is far from convinced that the higher bar will lead to fewer securities class actions. “It’s all going to depend on how lower courts interpret it,” said Lascaris. “But at the end of the day, if you have a case that on its face appears meritorious and you have credible evidence to support it, you are going to get leave. If you have a slim case, with no or marginal evidence to support the case, you are not going to get leave. That’s just the reality. Cases are going to be decided by the facts and the evidence, and the nuances of the leave test are not going to have I think long term implications.” 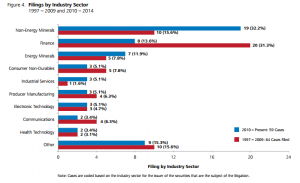 The SCC ruling is disappointing because it focused almost exclusively on the screening mechanism to prevent “unmeritorious litigation” to the detriment of the underlying objective behind the Quebec Securities Act and similar legislation in other provinces, said Montreal lawyer Michel Savonitto who acted for the numbered company. Up until the amendments, Canadian investors in the secondary trading market like the stock market did not have access to a statutory cause of action when they suffered losses as a result of breaches of continuous disclosure requirements. In common law jurisdictions, investors had to rely on the tort of negligent misrepresentation, which required that investors prove that they had relied on the misinformation or omission of information to their detriment. That was extremely difficult to prove, and essentially put “meaningful redress” out of reach for many who were harmed by dubious disclosure practices, noted Justice Abella.

The SCC ruling turns back the clock to an era before the legislative amendments were introduced to make it easier for investors to launch securities class actions suits, asserts Savonitto. “With the decision that was rendered, it seems to me that they have taken from one hand what they previously gave on the other because the way the test has been interpreted is so restrictive that it will be just as difficult to seek redress as was the case before (the legislative amendments),” said Savonitto. “Even though the SCC warns that it should not be a mini-trial, for all intents and purposes it will be almost like a trial because it will be necessary for plaintiffs to introduce credible evidence. Will this mean that plaintiffs will have to introduce expert evidence? That will be extremely onerous for small investors who are considering launching a class action suit.”