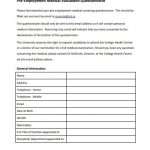 A prospective police officer who alleged that the Quebec provincial police force withdrew its pre-employment offer because he has Tourette Syndrome was rebuffed by the Quebec Court of Appeal after it found instead that he was not forthright and did not act in good faith during the hiring process.

In a decision in line with prior jurisprudence, the Quebec Appeal Court sheds new guidance that advises employers to exercise caution when drafting questionnaires, particularly medical queries, even in cases when pre-employment offers have been made, according to employment and legal experts. The unanimous per curium ruling acknowledges that it is a difficult balance to achieve between asking overly broad questions that may be deemed to be discriminatory under the Quebec Charter of human rights and freedoms and drafting “too specific” questions that may deprive employers of relevant and necessary information.

“It provides some guidelines to employers,” remarked Finn Makela, a law professor at the Université de Sherbrooke where he teaches labour and employment law. “One, it’s not an open bar. Employers can’t just ask super vague questions. And second, the decision also confirms the jurisprudence that the employer needs to justify in their specific circumstances why questions are related to job functions. So that gives some guidance. But, as the Cour of Appeal says, it’s not always easy.”

END_OF_DOCUMENT_TOKEN_TO_BE_REPLACED

With Quebec ranking 10th out of 14 jurisdictions in Canada, and 57th in the world, behind Honduras and Romania, the Quebec government should overhaul the provincial access to information legislation to compel all public bodies, even those partially financed by the provincial government, to be subjected to the access to information law, noted the 214-page, five-year report that issued 67 recommendations. The Commission, which also oversees provincial privacy legislation, also called on the Quebec government to beef up privacy protection measures.

“The access to information law has not been the subject of a thorough reform in 35 years, and the privacy legislation in 22 years,” remarked Diane Poitras, the Commission’s vice-president. “It’s time to re-establish the balance between the rights of citizens — who are calling for greater transparency and stronger privacy protection measures — and the needs of business and government organizations to collect and use” — and in some cases safeguard — information.