A blue-ribbon panel of tax experts has proposed a bold overhaul of Quebec’s tax system that would introduce a new tax mix by slashing $5.9 billion in Quebec personal and business taxes while increasing consumption taxes and fees in a bid to spur economic growth, job creation, and make the province a more competitive place to invest.

The sweeping reforms, which represent a marked shift in tax policy by shifting the reliance on income taxes to provincial sales tax and user fees, could serve as a model for other provinces as they too are grappling with an ageing population and sluggish government revenue growth, said Stephen Gordon, a professor of economics at the Université Laval.

“We’re going to need public finance to come from somewhere and we can’t count on an ever-expanding working population to generate economic growth,” said Gordon. “If you ask the question to other provinces about what they can do to accentuate economic growth and keep the level of tax revenues going, they are going to get the same answer as the report came out with.” 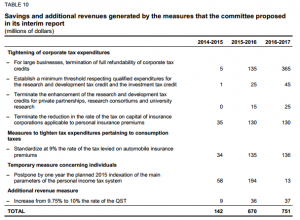 “The Godbout panel did a collossal job,” said Daniel McMahon, FCPA, FCA, president and chief executive officer of the Quebec CPA Order. “They conducted an analysis that was done with a lot of rigour and objectivity. But once the report is tabled, it’s in the hands of politicians. The report is meant to be taken as a whole. If the government cherry-picks among the measures without taking into account its coherent (vision), then it could have a perverse effect.”

The eight-member committee, which examined almost 300 provincial tax measures and analyzed 280 briefs and 17 external studies prepared at its request, asserts that its proposed reforms would increase GDP by $2 billion, boost personal disposable income by nearly $600 million, and lead to the creation of 20,500 jobs. It also boasts that the tax reform would be tax neutral as is not intended to generate new revenues for the government. “The proposed changes must be self-financing and neither increase nor decrease the overall tax burden,” said the report. 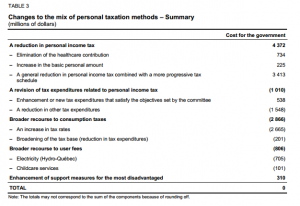 The panel proposes shaking up the personal income tax system, beginning with reducing personal income tax by approximately $4.4 billion. It also suggests abolishing the so-called health contribution tax, a measure that would lead to a $734 million personal income tax cut. Introduced in 2011, the health contribution tax is paid when Quebecers complete their provincial income tax returns, and most Quebecers end up paying about $200 annually. More fundamentally, the Godbout report urges the provincial government to revamp the personal income tax bracket system, and increase it from four to nine, with lower marginal tax rates reduced and upper ones left unchanged but applied to a greater income. Moreover, it advocates increasing the annual income tax exemption to $18,000 from $14,281. All told, the report suggests that Quebec taxpayers would be better off. A family with two children could save up to $1,800, single parents as much as $1,000, and seniors up to $4,200. 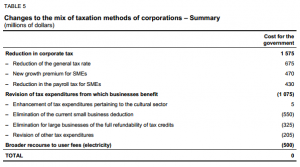 The corporate income tax system should also be revamped, according to the committee. It proposes measures that would lead to a $1.6 billion corporate tax cut — including slashing the pay roll tax by $450 million — that would be funded by a revision of tax expenditures as well as broader recourse to user fees. To promote business investment in Quebec, the panel also recommends reducing the corporate income tax rate from 11.9 per cent to 10 per cent, which would make it the most competitive tax rate in Canada. It also suggests reducing the payroll tax rate for small and medium-sized enterprises from 2.7 per cent to 1.6 per cent, which would reduce their tax burden by $450 million annually.

More controversially, the Godbout proposes jettisoning a number of business tax incentives. It recommends eliminating tax credit refunds for large business, which in the long run would generate recurring savings of $325 million. It also advises replacing existing small business deductions, which cost $550 million, with the introduction of a “growth premium” to encourage them to grow.

“The report is absolutely bold because it proposes changing the tax system altogether,” said Albert De Luca, a tax partner and national leader of the global R&D and government incentives group at Deloitte. But he says that the report goes too far when it recommends substantially reducing tax credits for sectors such as R&D, multimedia, and video. “Quebec has always looked at the incentive system to help because economically speaking when you are investing, that is when you need help,” added De Luca. “When you are investing you typically have losses, and if you have losses you should have incentives paid to you. That’s a case where they were too bold.”

Just as controversially, the Godbout report proposes an increase to the provincial sales tax, from the current 9.975 per cent to 11 per cent, and a slew of new or increased consumption taxes on excess hydroelectricity usage, insurance premiums, tobacco products, gasoline and diesel, alcohol. An increase in consumption taxes would generate $2.665 billion in additional tax revenues, according to the panel. “Generally speaking, the studies reveal that direct taxes are more detrimental than indirect taxes,” affirms the Godbout report.

De Luca counters that an increase in sales tax would be counterproductive. “It almost becomes a direct tax as opposed to a consumption tax, and at that point remember we have the United States next door and people don’t mind travelling to the U.S. to buy staff,” observed De Luca.

The head of research at the Montreal Economic Institute concurs. According to economist Youri Chassin, the provincial government should forge ahead with some corporate and personal income tax cuts but resist the urge to increase the provincial sales tax. In fact, he believes the reforms proposed by the Godbout report should not be tax neutral. “It’s a question of competitivity,” said Chassin. “We are already highly taxed. It should not be tax neutral. The government should above all not increase the tax burden of Quebecers.”

Becoming more reliant on sales tax and less dependent on income tax would change not only how government revenues are generated but also shift the balance of power between the state and taxpayers, suggests Michael Citrome, an Ottawa tax lawyer with HazloLaw Professional Corporation. From an administrative point of view, sales tax is paid by consumers but is collected and remitted by merchants, points out Citrome. It is merchants then who are liable for unpaid sales tax, not consumers. In cases where there are sales tax disputes, the rule is pay now, fight later – and Revenue Quebec has been using this rule to put a lot of pressure on business, added Citrome. “It would shift the balance of power even more to the state because more of the state’s revenue would be in a form where they could coercively collect it from taxpayers, even against taxpayers’ objections, ” said Citrome.