While multinationals are under growing public criticism for using tax avoidance strategies such as assigning valuable patent rights to shell companies based in tax havens or receiving interest deductions for payments made to their own subsidiaries, tax competition too is responsible for the dire situation, said Peter Dietsch, a professor at the Université de Montréal and author “Catching Capital – The Ethics of Tax Competition.” Tax competition, a phenomena that has really taken off over the past two decades, occurs when countries strategically design fiscal policy to attract capital from abroad.

A controversial practice, tax competition undermines fiscal autonomy which holds that states should be able to decide for themselves the size of the state relative to its gross domestic product and the level of distribution, added Dietsch. Some countries have adopted tax competition to attract portfolio capital from abroad, using bank secrecy as an enticement to avoid paying taxes. Others have attempted to attract paper profits of multinationals by encouraging strategies such as transfer pricing or inter-company loans to transfer profits from one jurisdiction to another like Luxembourg. “Both the tax evading individual and the tax avoidance multinational are free riding on the provision of public goods and public infrastructure where they reside or produce,” asserted Dietsch, who added that there are other countries, with Ireland being the best example, who use a different tack and try to “lure” and entice multinationals to set up shop in their country in exchange for low corporate tax rates.

“Tax competition undermines fiscal autonomy because it puts a downward pressure on the tax rates so different countries are affected differently,” Dietsch told an audience of some 200 attending a conference in Montreal that examined the issue of tax competition. “Developed countries can usually compensate by shifting the burden onto less mobile tax like work and consumption and thereby protect their revenues but see rising inequality. Now developing countries are even in a worse situation because they see both lower revenues and higher inequality. So for them both of the aspects of fiscal autonomy are compromised.” 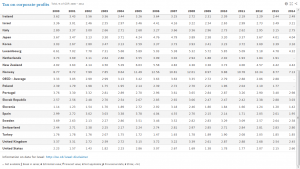 Exacerbating the issues that surround tax competition is the lack of transparency that shrouds it, according to Allison Christians, a tax law professor at McGill University. While multinationals, the host country “who tries to lure the multinational by any means necessary which can include a nice reduction in tax,” and tax havens are perceived to be the only culprits behind tax competition, there are other players behind the scenes, including the “pushers of capital” who are looking to send capital into countries with low tax rates as well as “agents of the government” who make millions of decisions every year without preying eyes.

“There’s a lot more to this global system that we cannot see,” remarked Christians. “A lot of tax competition plays out in ways that aren’t transparent so we are all trying to figure out who’s doing what to who and when.”

While there is some information, such as regulatory disclosures, that business do make available to the public, much remains concealed, added Christians. The global structures for most multinationals remain opaque as are its intra-firm contracts. Information about tax returns, the positions it has taken, and the reasons behind the decision-making process when filing tax returns are off-limits. Public sector officials are no better. Private rulings between governments and multinationals are veiled as are a “massive amount” of global international tax rules being interpreted in closed forums by competent authorities. “There is a whole world developing around tax treaty arbitration that none of us even knows what goes on because we aren’t even able to know that there is a dispute, and who is arguing and who is judging,” pointed out Christians, who is calling for greater transparency by all actors involved in international tax matters.

Elise Bean, a former staff director and chief counsel in the U.S. Governmental Affairs Permanent Subcommittee on Investigations, can attest to the secrecy behind tax matters. Bean, who headed inquiries into offshore tax avoidance by Apple, Microsoft Corp, and Caterpillar Inc. as well tax shelter sales by professional firms, including KPMG, said simply finding out the facts while conducting investigations turned into a real battle, requiring subpoena after subpoena, interview after interview. “To get information, you have to fight like hell so don’t tell me tax competition is a healthy market force when you can’t find out at all what’s going on,” Bean told the audience.

Ambitious initiatives like the OECD’s base erosion and profit shifting project is a step in the right direction, added Bean. The OECD recently published proposals for global reform of international tax rules to thwart aggressive tax planning by multinational companies. One of its proposals calls for country-by-country reporting, which will require companies to reveal where they really earn their revenues, hold their assets, employ people, and book their profits. “For the first time, beginning in 2018, we’re going to be able to get information by multinational corporations about where their economic activity is, and where they are actually paying taxes,” noted Bean.

But much more can be done, said Brian Arnold, senior advisor to the Canadian Tax Foundation. The co-editor of the Bulletin for International Taxation suggests public naming and shaming may be a partial solution. Tougher legislation to “alter the risk-reward analysis” that taxpayers conduct when deciding whether to engage in tax avoidance, better enforcement by tax authorities, and courts who “purposively view transactions realistically” would go a long way to controlling tax avoidance, added Arnold. “If you want multinationals and wealthy individuals to pay more tax, the government has the means that are available to make them do that,” said Arnold. “They are the ones who draft and pass legislation, or not, as the case may be. They are the ones who appoint judges. They are the ones that provide resources for tax administration and justice. So if you want to blame somebody, blame the governments. They are not acting to deal with this problem.”

It might however be time to think outside the box, suggested Tassos Lagios, the managing partner of the accounting and advisory group Richter. Perhaps the solution to the conundrums that tax competition pose is to forget about taxing corporations, said Lagios. “Unfortunately business has changed so significantly over the last 10 to 20 years that tax laws have not adapted quick enough to address this, and therefore creating this conflict,” said Lagios.

In the meantime, however, countries are grappling with the dilemmas forged by tax competition. Germany and other larger European nations cannot afford to lower tax rates, said Katharina Becker, head of the International Tax Division of the Federal Academy of Finance in the Federal Ministry of Finance in Berlin. “In Europe we have smaller countries that favour tax competition because they benefit from it while larger countries favour tax harmonization,” said Becker. “We haven’t come to an agreement in Europe, and I don’t see a compromise in the near future.”