Delays as a justification for ordering provisional execution of an immediate initial $1.13 billion payment “does not stand up to scrutiny,” added appeal court. “If delays in appeal were in themselves sufficient to satisfy the criteria of article 547 of the Code of Civil Procedure (C.P.P.) then provisional execution would become the rule instead of the exception,” said the appeal court in its 17-page ruling.

There are also other legal and practical considerations that have to be taken into account, noted the appeal court, beginning with what happens if the tobacco companies are successful in appeal. The tobacco giants successfully argued that the amount would not be recoverable if they eventually won on appeal. “The potential necessity of seeking reimbursement of $10,000 from each of the 100,000 class members is by any objective standard a prejudice that cannot be ignored,” said the appeal court. 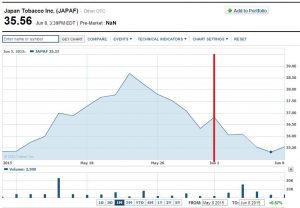 The initial $1.3 billion payment would also cause a “significant impact” on the tobacco companies – Imperial Tobacco Canada Limited, Rothmans, Benson & Hedges Inc., and JTI-MacDonald Corp. – despite that they are profitable and sizeable, added the appeal court. In the case of JTI-MacDonald, its portion of $142,530,000 exceeds its annual earnings before interest, taxes and other expenses and well exceeds cash on hand of approximately $5.1 million, said the appeal court. Rothmans, Benson & Hedges’ $246,030,000 exceeds its projected cash on hand at the end of July 2015 by approximately $125 million while Imperial Tobacco’s provisional execution amount of $742,530,000 is approximately double its annual profit (before extraordinary items) and greatly exceeds current cash and credit availability to pay such a sum, added the appeal court.

“The judge based his calculations of appellant’s ability to pay on historical earnings and balance sheet worth,” said the appeal court. “He obviously did not analyze current cash and credit availability as set forth in the affidavits submitted to us.”

Cynthia Callard, the executive director of the Physicians for a Smoke-Free Canada, told Canadian Press that she was not “really” surprised by the appeal court ruling. “They were successful but the court made it very clear in this ruling that they’re only successful on this particular pre-payment. They said it was administratively difficult to see how the money could come back.”

The landmark ruling that ordered three leading Canadian tobacco companies to pay $15.5 billion in moral and punitive damages to Quebec smokers will likely serve as a road map for provinces who have filed medical cost recovery lawsuits against the so-called Big Tobacco, according to legal observers. 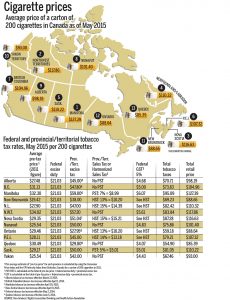 After a trial that spanned over 253 days of hearings, heard 76 witnesses, with 43,000 documents filed as exhibits, Quebec Superior Court Justice Brian Riordan found that the three tobacco companies committed four separate faults under Quebec law. The decision covers two class actions that were heard as part of the same trial, with one obtaining damages for 918,218 Quebecers afflicted with tobacco dependence and the other for 99,957 Quebec smokers and ex-smokers who developed emphysema, lung cancer, or throat cancer.

“The outcome of the Quebec class action demonstrates that the tobacco industry can be defeated, and defeated in a big way,” noted Rob Cunningham, a lawyer and senior policy analyst with the Canadian Cancer Society. “So provincial governments have to simply persevere, get the cases to trial, and they can see from Quebec what the potential result will be. The wrongful behaviour at issue in the provincial government lawsuits is fundamentally the same as in the Quebec class action.” 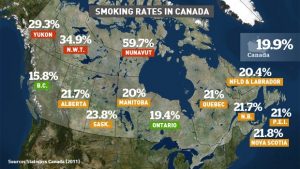 Every provincial government is suing the tobacco industry, including their foreign-based parent companies, to recoup health-care costs emanating from smoking-related disease. The Ontario government is seeking $50 billion, Quebec $60 billion, and other provinces have yet to stipulate a dollar figure in their statements of claim. Much of the evidence and testimony stemming from the Quebec class action will be available to the provinces. “What we now have is a bit of a road map for cases that are going before the courts in other provinces in terms of the evidence and issues,” noted Glenn Zakaib, a Toronto class action and product liability lawyer with Cassels Brock & Blackwell LLP.

The Quebec class action suits were launched in 1998, consolidated and certified seven years later, and the case began sitting in 2012. In between, countless proceedings and appeals were filed that delayed and interrupted the trial. The suit essentially alleged that the tobacco companies were liable because they knew they were putting out a harmful product, failed to inform the public of the risks and dangers of cigarettes, and conspired to “disinform” the public and government officials of those dangers to prevent “knowledge of the nature and extent of the dangers inherent in cigarettes from being known and understood.”

“It should have been an easy case because it is rare for a manufacturer to put in the market a dangerous product that creates dependence all the while lying about the dangers the product poses and fabricating false science to induce people to use and continue to use their product,” remarked Bruce Johnston, a class action lawyer with Trudel, Johnston & Lespérance, a Montreal law firm that joined forces with three other firms to represent class action plaintiffs. All told, about 10 class action plaintiff lawyers worked on the case, with five or six working full-time during the trial.

In a scathing ruling that described the actions of the tobacco companies as brutally negligent, immoral, and malevolent, Justice Riordan found that the three cigarette manufacturers breached their general duty not to cause injury to another person and violated their duty as manufacturers to inform clients of the risks and dangers of its products under Civil Code of Quebec. As well, they were found to have infringed the rights to life, personal security, personal inviolability and dignity under the Quebec Charter of Human Rights and Freedoms and their obligation not to hide the truth or mislead clients concerning their products under the Quebec Consumer Protection Act. 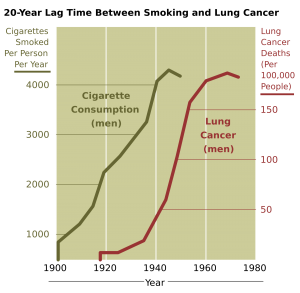 “Over the nearly fifty years of the Class Period (from 1950 to 1998), and in the seventeen years since, the Companies earned billions of dollars at the expense of the lungs, the throats and the general well-being of their customers,” said Justice Riordan. “If the Companies are allowed to walk away unscathed now, what would be the message to other industries that today or tomorrow find themselves in a similar moral conflict?”

The liability however was not apportioned equally, with Imperial Tobacco ordered to pay 67 per cent of the damages, RBH 20 per cent, and JTM 13 per cent. Justice Riordan held that Imperial Tobacco’s culpable conduct surpassed that of the two other companies because it was the industry leader on many fronts, including that of hiding the truth from – and misleading – the public. Moreover, Justice Riordan found that it acted in bad-faith by blocking court discovery of research reports by storing them with outside counsel. In the summer of 1992, lawyers at the now defunct Montreal law firm Ogilvy Renault supervised the destruction of some 100 research reports in Imperial Tobacco’s possession, conduct that Justice Riordan held to be unacceptable, bad-faith and possibly illegal, and designed to “frustrate the legal process.”

“The most important thing that Justice Riordan has done is that he has held accountable an industry that manufacturers a product that is dangerous, that it knows to be dangerous, and he painstakingly, carefully and methodically went through mountains and mountains of evidence and said you cannot get away with this,” said Gordon Kugler, a Montreal medical malpractice and class action lawyer with Kugler Kandestin LLP, one of the other law firms who represented the class.

Though the ruling was based on Quebec law, many legal observers believe that the outcome would most likely have been the same if the case was heard elsewhere in Canada thanks to the voluminous medical evidence, including epidemiological studies, and expert evidence that was introduced at trial. “I don’t see how based on the facts a court in another jurisdiction could come to a different conclusion,” said Jean Saint-Onge, a Montreal class action lawyer with Lavery, de Billy. “Although the law may differ, the principles remain the same and are not unique to Quebec.” But equally important, the tobacco class action underscores the amount of proof that is required when a class action “of this magnitude” is heard on the merits. “You need to rely on massive expertise on many horizons, and that makes for extremely costly cases.”

The judgment may not have created new law as it applied well-known principles under various Quebec laws but it has possibly opened the door to a new tactic for class action plaintiffs, said Johnston. Tobacco companies argued that causation for each member of the class must be established. In essence, they wanted each class member to testify. But under Quebec’s Tobacco-Related Damages and Health Care Costs Recovery Act of 2009 (TRDA), a law created especially for tobacco litigation and one that other provinces have as well, adequate proof of causation with respect to each member of a class can be made through epidemiological evidence. “I always felt that this this is the path to take in cases of mass tort involving the responsibility of manufacturers,” said Johnston. “Because if one has to prove causation on an individual basis, it renders the class action inefficient. I will not hesitate to plead collective causation in other cases, and I believe the courts will eventually adopt it.”

The case is far from over. Other issues still need to be settled. Class action plaintiffs sought a judgment declaring the tobacco companies guilty of “improper use of procedure.” But Justice Riordan decided to mull over the issue until after the judgment on merits. And if the ruling is executed, there remains the thorny issue of how individual claims are going to be proved. “That’s going to be a significant issue – what do you do with the $15.5 billion?,” remarked Zakaib.

In the meantime, Mario Bujold, the executive director of the Quebec Council on Tobacco and Health, one of the plaintiffs in the class action, is elated with the “historical” ruling even though he knows the battle is far from over. “It’s a victory for the victims and all of society,” said Bujold. “It recognizes the responsibility of an industry that acted irresponsibly for more than 50 years. Now governments will have no choice but to take measures to reduce smoking, and even better, introduce better controls on tobacco products.”