Canadian companies who paid little heed to anti-bribery compliance can no longer afford to be complacent following proposed amendments that will beef up Canada’s anti-corruption laws and bring it somewhat in line with jurisdictions such as the United States and the United Kingdom.

Under proposed amendments to the (CFPOA) maximum jail times have been increased, territorial jurisdiction expanded, facilitation payments possibly being phased out and most notably a new “books and records” offence created that will hold senior corporate officials and boards of directors accountable for misdeeds.

The federal government’s latest effort to combat corruption and bribery by Canadians in foreign markets comes on the heels of stinging rebukes from international organizations like the Transparency International and the Organization for Economic Cooperation and  Development (OECD) for failing to enforce its anti-corruption laws. A 2011 OECD report “welcomes Canada’s recent enforcement efforts” but describes Canada’s legislative  and institutional framework as “problematic.” To date, there are 35 ongoing investigations but only three convictions under the Act. In stark contrast, 58 individuals and 28 corporations have been convicted in the U.S.

“The government is in a certain sense playing catch up with jurisdictions in the U.S. and the U.K. in its efforts to convince Canadian business not to engage in corrupt practices overseas so it is trying to muscle up its legislation,” remarked Peter Kirby, whose practice covers the spectrum of cross-border disputes, trade and regulatory compliance issues at Fasken Martineau DuMoulin LLP in Montreal.

With the passage of Bill S-14 (the Fighting Foreign Corruption Act), now before the Senate, it is widely expected that more anti-corruption investigations will be launched and more charges will be laid. Besides increasing the maximum jail time to 14 years, up from the current five, Bill S-14 grants the Royal Canadian Mounted Police exclusive enforcement jurisdiction – a seemingly technical but very important amendment, according to Toronto lawyer Milos Barutciski, co-head of international trade at Bennett Jones LLP. While the RCMP has two specialized investigation teams (based in Ottawa and Calgary) that are responsible for the investigation of any potential breaches of the CFPOA, at present any police officer in Canada has the authority to lay charges. The proposed amendment is more than welcome as it will eliminate the potential for any jurisdictional conflicts between federal and provincial law enforcement agencies, says Barutciski. 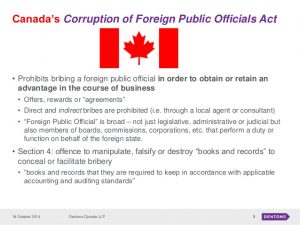 Eliminating the notion of territorial jurisdiction by allowing authorities to prosecute Canadian citizens for offences under CFPOA wherever they may be living and even in absentia is judicious, adds Barutciski. “Nationality is basically a traditional approach on jurisdiction that made sense at a different time,” said Barutciski, who took part in the government’s consultation process on the changes. “It was very difficult for a company that was involved in this to actually use this as a defence. What company that cares one bit of its reputation and its investors wants to be able to say we did it but Canada has no jurisdiction so we are innocent.”

The creation of a books and records offence effectively lowers the bar for prosecutions of anti-corruption offences and brings it in line with U.K. and U.S. anti-bribery laws, assert experts. Proving bribery offences is notoriously difficult, points out Ottawa lawyer Richard Wagner, senior partner at Norton Rose Canada LLP. The proposed amendment, which will make it a criminal offence to make, falsify or conceal records and payments relating to the bribery of a foreign public official, will arguably make it easier to achieve convictions under the Act. In the U.S. the majority of cases have been prosecuted under book and records offenses “because it is so much easier to prove,” says Wagner, an international law expert.

“Right now you have to prove there was intent, mens rea, by offering or paying a bribe,” explained Wagner. “With the new offense, all you have to prove is that the books and records did not reflect the bribe that was paid. So what’s going to happen in Canada is a similar evolution to the U.S. where most cases or a large number of case are prosecuted under books and records because it is usually so difficult to prosecute bribery offenses.”

A books and records offence will also entail broader obligations. It will hold not only corporate officials who have arranged or paid the bribe accountable but also senior corporate officials — including chief financial officers, chief executive officers and members of the Board of Directors – criminally liable if they turned a blind eye or ignored expenditures that were not inaccurately recorded. “In other words it’s not just the guy who did the bad thing; now it’s people after the fact,” explained Barutciski. “It puts a real onus on corporate officials to pay attention – even if their boss tells them to do it – on pain of their own criminal culpability. That is why it’s such a big thing.”

But though a books and records offence should be ostensibly lead to more investigations and prosecutions in Canada, it still will likely be more difficult to prove than in the U.S. That’s because in the U.S. the books and records provision is enforced by the Securities Exchange Commission (SEC). The SEC, a civil law enforcement agency, has a lower burden of proof than the U.S. Department of Justice in prosecuting violations. The SEC has jurisdiction over issuers and its employees and agents and can bring civil charges for violations of the anti-bribery provisions and the books and records and internal controls provisions. “It’s unfortunate that we are relying only on criminal enforcement,” said Barutciski. “It’s important to adopt a civil or administrative remedy as well.” Barutciski suggest that provincial securities commissions be “sub-delegated” to enforce books and records offenses.

In any case, the overriding message behind the federal government’s efforts to tackle corruption and bribery by Canadians in foreign markets is clear. The traditional approach that business have long taken — “when in Rome do as Romans do” —  is no longer acceptable. Canadian companies active on the international scene will have to ensure that they adopt and implement effective compliance programs, particularly since the new amendments will make it easier to take legal action against Canadian individuals and companies. “It adds another layer of compliance that business have to watch,” said Kirby. “Does it make life tougher? Life has been getting tougher in terms of compliance for the last decade at least. It’s the cost of doing business.”

This story was originally published by The Lawyers Weekly.