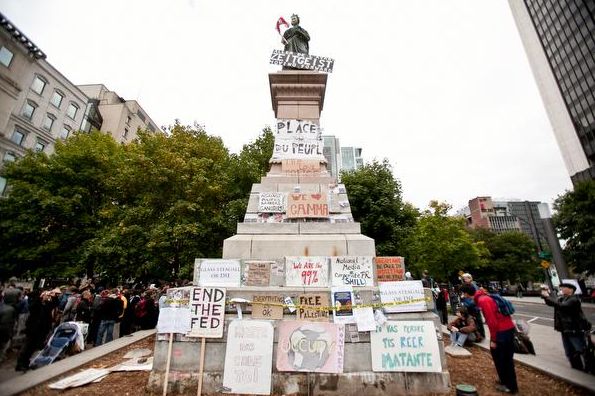 Two protesters that occupied a public square in downtown Montreal won a partial victory after the Quebec Court of Appeal awarded them $2,000 each for moral and material loss because the police no longer had reason to keep them handcuffed and detained in the back of a police car to drive them to another part of the city.

The ruling, which partially overturned a lower court ruling, provides guidance over the use of handcuffs while in custody, the duration of detention as well as the marking of hands and taking of pictures for identification purposes following arrest.

“This is very good news for all people who participate in peaceful protests because the question is not simply whether the protest was legal or not or did it become illegal at any time but also whether the police operation was legal throughout,” said Julius Grey, a Montreal human rights lawyer who successfully plead the case before the appellate court.

The three appellants were protesters that were part of a group that occupied a public square for nearly six weeks as part of the “Occupy Wall Street” movement. The occupation, which eventually consisted of a small and densely populated tent city including a kitchen, was initially tolerated by the city. On November 23, 2011, an order to leave the premises was given by Montreal police to some 60 protesters, and most left voluntarily and peacefully. A dozen protesters, including the appellants, refused to leave and attached themselves to each other and parts of the kitchen tent. They were arrested pursuant to the Quebec Code of Penal Procedure (CPP), and were physically removed and loaded onto a bus. A lower court judge dismissed their challenge over the legality of the arrest and their claim for damages.

Before the appeal court, the appellants no longer contested the legality of the arrest but sought damages stemming from certain police practices. They contended that the marking of hands with invisible and black ink violated their constitutional rights. They also sought compensation because pictures were taken of them while they were in detention, and the duration and manner of that detention.

The appeal court dismissed all of their arguments, except for one. Police officers, acting reasonably, may handcuff a person who has been arrested to execute their duties or for security, noted Quebec appeal court Justice Mark Schrager. But it should not be carried out systematically. Applying handcuffs or tie wraps “is within the discretion” of an arresting officer but “there must be good reason” to do it, added Justice Schrager. In this case, the cuffing of two of the appellants initially did not constitute a fault because it was not unreasonable in the circumstances. However once the police decided to release the appellants from custody, the tie wraps were not removed at once – and this was a fault.

According to Danièle Roy, a criminal lawyer who heads the Association des avocats de la défense de Montréal, the decision is a timely reminder to police that an arrest does not automatically give rise to the right to apply handcuffs to a detained person. “Unfortunately, it has almost become routine for people arrested by police to be handcuffed,” said Roy.

The detention of the appellants too was problematic, said the appeal court. Under the CPP a person that has been arrested must be released once there are reasonable grounds to believe that continued detention is no longer necessary to prevent the repetition or continuation of the offence. Two of the appellants were detained between 20 to 60 minutes, something that the trial judge decided was reasonable in the circumstances. However once the appellants were taken off the bus and police decided that no statements of offence would be issued and that they would not be charged, they should have been released. Instead they were put in the back of a police car, still handcuffed, and transported to another part of the city. That was vexatious and harassing, and constituted a fault in what was “otherwise reasonable action” by police, held Justice Schrager in a unanimous decision in Godin c. City of Montreal 2017 QCCA 1180.

“The action however was unreasonable, if not abusive,” found Justice Schrager. “Appellants were at the very least inconvenienced by the displacement. As well, the continued binding of their hands obviously caused physical discomfort.”

A third appellant was not awarded damages because his detention was not prolonged, and he was not handcuffed.

Grey hopes that finding will compel police to review their policies. “I hope they will be told by their insurers or municipalities that when you decide to handcuff somebody who is not a major criminal you better remember it is for the minimum time necessary to get control,” said Grey. “You can’t just keep people tied up in order to make it easier for yourself.”

The appeal court also found that police did not commit a fault by using invisible ink to mark the appellants. It did not “interfere” with their physical, psychological or emotional integrity in more than a “fleeting” manner, and the “physical intrusion” from the marking was momentary and minimal, added Justice Schrager.

The decision is relevant and useful because the appeal court underlines the limits of using force in the public interest, said Montreal lawyer Jean-Claude Hébert. “Each time that police investigate an offence, enforces decisions by the court or is in contact with the public, their conduct symbolizes the way that fundamental rights and liberties are respected and protected. The way that police fulfil their duties is a clear indicator of the level and quality of democracy and the degree of respect for the rule of law.”