A Quebec Superior Court decision that awarded $8 million to a minor league hockey player who was left paralyzed by a dangerous hit from behind sends a strong message that athletes can be legally held responsible for their actions when their negligent conduct causes injury to another player, according to legal experts.

In a ruling that pointedly reaffirms the notion that sports are not exempt from the rule of law, Justice Daniel Payette held that participants in sporting activities implicitly accept certain reasonable inherent risks while playing. But not every risk is an inherent risk, particularly if it involves conduct that is outside the realm of the sport, added Justice Payette in Zaccardo c. Chartis Insurance Company of Canada 2016 QCCS 398.

“This will be a landmark ruling in civil liability cases involving sports,” said Montreal sports lawyer Marianne Saroli. “Normally the courts have given an extremely restrictive interpretation to civil liability in sports. Violations of the rules of the game are normally interpreted by referees. However there are exceptions such as in cases where the fault is so serious that it deserves a legal sanction. That’s why this ruling is so important.” 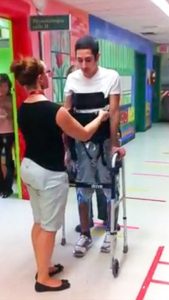 Justice Payette handed what is believed to be the highest amount awarded for a sports-related injury in Canada when he ordered Ludovic Gauvreau-Beaupré and Chartis Insurance, who covered players who played in the minor hockey league, to pay damages to Andrew Zaccardo and his family for a bodycheck from behind that left him paraplegic. Following the hit, which took place less than a minute into the game on October 2010, Zaccardo was knocked into the boards and suffered a spinal cord injury that has confined him into a wheelchair and limited the use of his hands. The award includes $6.6 million to cover Zaccardo’s care and assistance, $1M to his mother who had to stop working to care for her son, $350,000 for his father, and $50,000 to his younger brother.

Justice Payette ruled that Beaupré was negligent and committed a civil fault. The hit from behind, while not premeditated, was deliberate as Beaupré had enough time and space to stop, change direction, or minimize the impact against Zaccardo, held Justice Payette after viewing video evidence. Beaupré, with his arm raised to just below the neck level, slammed Zaccardo into the boards, his two feet in the air as he hit him with full force. The judge found that although Beaupré did intend to hit Zaccardo from behind he did not intend to injure him. That is why both parties advised the judge at the outset of the trial that nobody contended that this was an intentional fault, explained Montreal lawyer Stuart Kugler, who along Arthur Wechsler, successfully plead the case. Instead the judge found it was an act of negligence.

In his defence, Gauvreau-Beaupré pleaded that Zaccardo had accepted the inherent risks of hockey, including being checked from behind, by taking part in the game. The argument was rejected. “A participant in a sporting activity is entitled to the expectation that other players will take reasonable steps to avoid gestures that are likely to cause prejudice, even within the framework of a dangerous sport,” said Justice Payette.

What’s more, Beaupré knew hitting from behind was strictly prohibited thanks to publicity campaigns launched by Hockey Canada and Hockey Quebec. The two hockey organizations were initially named as co-defendants but they were dropped from the suit after the disclosure process revealed that they had published numerous publications and videos aimed at players, coaches, referees and even parents, stressing the dangers of pushing or cross-checking someone from behind. In fact, the hockey organizations described hits from behind as a “dangerous and cowardly act.” The hockey league that Zaccardo and Gauvreau-Beaupré played in went even further: all players had to wear a stop sign in the back of the jerseys to warn players not to hit from behind. Moreover, Beaupré was suspended for a game for checking from behind two years before the Zaccardo incident.

“Anybody who plays sports, and the judge emphasized this, you are only going to assume the risk that goes with any sport, whatever that may entail,” said Kugler of Kugler Kandestin LLP. “But not every risk is an inherent risk that players accept. Notably players do not accept the risk of getting injured by the negligible conduct of another player. The check from behind was negligent, dangerous, and contrary to the rules and regulations, and the instructional videos and safety bulletins published by Hockey Canada and Hockey Quebec – and therefore it was a civil fault.”

The decision indirectly applauds and encourages efforts by both hockey organizations to stem violent and dangerous conduct while promoting rules and regulations that strive to ensure the safety of players, noted Yann Bernard, a Montreal sports lawyer who was the ombudsman for the Canadian team over the past couple of Olympics. “Sport organizations should be pleased with the ruling as it can only help in their efforts to clean up their sport,” remarked Bernard. “It will likely help with enrolment because it will be viewed positively that the courts are watching them and applying the law in a sports context.” Besides helping to reduce needless injuries, sport organizations that take a proactive stance towards promoting safety have a greater chance of demonstrating that they have undertaken reasonable steps and acted as a reasonable organization when facing a lawsuit, added Bernard.

Though there is some debate over the impact the $8 million award will have on arena operators and minor hockey leagues, Montreal insurance lawyer Jonathan Lacoste-Jobin of Lavery, de Billy believes the impact will negligible, particularly since both hockey organizations were not sued by Zaccardo. The Zaccardo decision does however underscore that the courts will be paying close attention to efforts by sports organizations to make the sport safer, said Jobin. “The decision did not condemn or censure the sports organizations or even the team so I don’t think that this ruling represents an increase in risk for these organizations,” said Jobin.

What seems to be clear though is that the long-lasting perception that what happens on the ice stays on the ice are long gone, says Wechsler. “The decision makes it clear that people have to behave as reasonably prudent people in any setting, including in a sports setting,” Wechsler. “Only certain risks are acceptable and inherent to the sport. But I don’t think we can really anticipate how far reaching this decision could be and how it’s going to be applied in the future in other contexts.”

An application for leave to appeal before the Quebec Court of Appeal has been filed by the defendants.