Schreiber filed a suit based on a verbal contract he alleges he reached with Mulroney in Hull, a town located across from the nation’s capital. But the 74-year old deal maker sought to suspend the suit, arguing that his examination before a public inquiry could cause him harm as Mulroney could use information obtained in the course of examination against him.

Justice Jeffrey Oliphant was appointed by Prime Minister Stephen Harper to examine the business dealings between Mulroney and Schreiber. Each has offered conflicting accounts about the size of the cash payments, when their business deal was made, and what Mulroney was expected to do to earn the money. 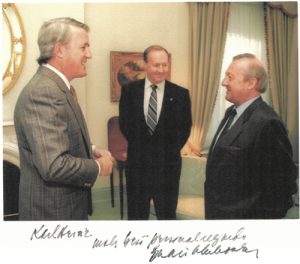 Mulroney has admitted that he accepted $225,000 from Schreiber after he left office in 1993 to promote the building of German-designed light armoured vehicles in Canada. Mulroney says he tried to line up support among foreign political leaders whose countries might become customers for the vehicles.

Schreiber says the deal was struck before the former prime minister left office, although the cash didn’t change hands until later. He says the payments totalled $300,000. Schreiber also claims Mulroney was supposed to lobby the Canadian government rather than foreign leaders.

The first phase of the Oliphant inquiry, which opens March 30, is expected to last six weeks will examine the business dealings between the former prime minister and Schreiber. The second phase will begin this June, and will include a public forum involving experts on political and government ethics, as well as separate hearings during which members of the public will present their submissions.

In overturning the court of lower instance, the Quebec Court of Appeal noted that findings made by a commission of inquiry findings does not has an influence on civil suits.  Informed by the Supreme Court of Canada in Canada (Attorney General) v. Canada (Commission of Inquiry on the Blood System), [1997] 3 S.C.R. 440, the appeal court held that a commission of inquiry has no authority to determine legal liability.

“While there is a clear link between the Inquiry and the civil suit at hand, it consists of two distinct processes, the fate of the first not dependent on the conclusions reached by the second,” said the three-panel appeal court.