Quebec’s financial watchdog is considering handing over the case involving Dominic Lacroix and his companies, who have been prohibited by a tribunal to promote and solicit investors for a new virtual currency called PlexCoin, to police authorities.

The Autorité des marchés financiers, the regulatory and oversight body for Québec’s financial sector, is also considering launching penal proceedings against Lacroix and his companies, said Sylvain Théberge, AMF’s spokesperson. Such proceedings would take place before the Court of Quebec, a provincial court.

“We are talking about thousands of people who have shown an interest in this system,” said Théberge, adding that a decision as to whether to call in police or refer the matter for penal proceedings will take place this week. “We are extremely concerned. It seems to us, until the contrary is proven, that investors may become involved in a high-risk investment.”

On July 20, 2017, at the request of the AMF, the Quebec Financial Markets Administrative Tribunal issued a broad ex parte forbidding Lacroix and his companies DL Innov inc. and Gestio inc. from “engaging in activities for the purpose of directly or indirectly trading in any form of investment” covered by the section 1 of the Quebec Securities Act, either in Quebec or from Quebec to outside of the province. The tribunal issued the same order against PlexCorps and PlexCoin.

(The decision by the Tribunal has yet to be published. An ex parte order is an order granted by a judge at the request of and for the benefit of one party only, without notice to or contestation by the other party.)

“We have an individual who up until today has decided not to respect the orders issued by the Tribunal,” said Théberge. “Behind PlexCoin in Quebec, it is Dominic Lacroix and his team who manage the site. He is the one looking after the advertising in Facebook. He is the one who is involved here in Quebec, through his Quebec companies, of attracting investors towards these operations.”

PlexCoin is a group of forty people, including programmers, engineers, and cryptocurrency specialists, “all independent” located throughout the world, according to its Facebook account. It recently published a white paper that ostensibly “explains all the details” of the PlexCoin project and supposedly “contains information” about the funding project. 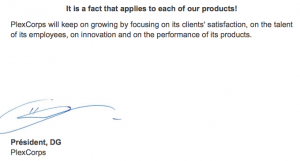 Details about the people behind the project have been excluded in the white paper. In the introduction of the white paper, there is a signature etched above the word president of PlexCorps but it is indecipherable. The spelling of the word president is written in French, and beside it are the initials DG which may mean director general or directeur général in French.

“The problem is that Facebook is located in the U.S.,” said Théberge. “We are holding talks with them. Their lawyers have been informed about the case.”

In a wholly unrelated case, Lacroix was the target of another order by the Tribunal, again at the AMF’s request. The Tribunal issued on June 13, 2017 ex parte freeze and prohibition orders against Lacroix, Régis Roberge, DL Innov inc., Micro-Prêts inc. and Gap Transit inc. in connection with failures to comply with the Securities Act.

On June 29, 2017, the Tribunal partially rescinded its far-reaching order after an agreement was reached between the AMF and the parties.

Earlier still, on February 2013, Lacroix and his company Micro-Prêts plead guilty before the Court of Quebec to six charges of illegal distribution, illegal practice and misrepresentations. The Court ratified the parties’ joint proposal and imposed a $25,000 fine.

“All of this demonstrates that this is an individual, who even though he has been sanctioned, does not seem to understand,” said Théberge. “So we are faced with a potential repeat offender.”