A controversial report by the Quebec Ministry of Finance that asserts that the current system governing the distribution of financial products and services in the province needs to be reviewed because it risks becoming inadequate and out-dated has been criticized as being unnecessarily alarmist by financial and legal experts.

The long-awaited report recommends wholesale changes to the regulatory framework for insurance and mutual funds. Besides boosting consumer protection coverage in the event of fraud, the report proposes a flexible legal framework to enable insurers to offer products online. It also recommends establishing a legislative framework aimed at individuals who are not insurance professionals but who sell insurance products such as travel insurance and vehicle rental insurance. More contentiously, the report calls into question its “cumbersome” oversight system and the existence of two regulatory bodies.

“The current system is beginning to show signs of losing impetus and no longer adequately satisfies the needs engendered principally by the new technologies,” states the 46-page report published at the beginning of the summer. Industry, after repeated calls for an extension, now have until the end of September to provide comments.

“If nothing is done, the regulatory framework risks becoming inadequate and outmoded. Both the industry and the public could suffer as a result. The time has, therefore, come to review it,” added the report on the Application of the Act respecting the distribution of financial products and services (Act).

But the Ministry’s assessment of the current state of affairs is far from unanimous. “The Act merits a review once in a while but the idea that is outmoded or inadequate, I find that strong,” noted Michael Garellek, CPA and a Montreal lawyer who has an expertise in regulatory affairs. Valérie Lemaire, a Quebec City lawyer specializing in insurance law, concurs. “While it’s necessary to review the Act, the report appears to me to be a bit too alarmist.” 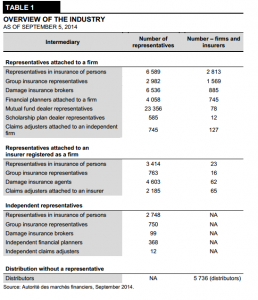 Quebec’s regulatory framework for the distribution of financial products and services is unique. Unlike the rest of Canada, which opted for a system of self-regulatory organizations (SROs), the Act imposes on financial sector representatives – except for representatives of securities dealers – oversight based on the model of professional corporations with so-called chambers to ensure compliance with the rules of professional conduct and development. Only in Quebec are financial planners regulated by legislation. And in contrast to Quebec there does not exist Canadian SROs that oversee distributors in the insurance sector. Moreover, unlike in Quebec, claims adjusters in other provinces must be certified but are regulated by the same statute as insurers.

In Quebec, the Act regulates both the representative and the firm. The Autorité des marchés financiers (AMF), Quebec’s financial watchdog, and the chambers exercise regulatory powers. Representatives are governed by chambers while the AMF keeps an eye out on firms. But the twofold oversight structure “spawns some degree of confusion, sometimes even a possible incoherence,” is more cumbersome than the approaches adopted in the rest of Canada, and entails additional costs, asserts the report. That’s because when the AMF inspects firms, it must also consider the actions of the representatives who acts for the firm and the firm’s responsibility to the representative. Conversely, a chamber that investigates a representative must also look at the firm’s conduct. “It is difficult to apply dual oversight without creating confusion from the standpoint of each one’s responsibility and monitoring of them,” said the report.

The report proposes examining all approaches to ease the regulatory and financial burden of registrants. That will likely put in peril two regulatory bodies, including the Chambre de la sécurité financière (CSF) which maintains and oversees the discipline, training, and ethics of 32,000 professionals practicing in group savings plan brokerage, financial planning, insurance of persons, group insurance of persons, and scholarship plan brokerage. The report points out that in all Canadian provinces except Quebec, mutual fund dealers and representatives are subject solely to securities regulatory organizations like the Mutual Fund Dealers Association of Canada (MFDA). “The current regulatory system in Quebec limits the ability to harmonize the Quebec model with that in the rest of Canada,” which leads to additional cost for the sector, according to the report. “If the intention is to bring in the MFDA, then the CSF should have some cause for concern,” said Garellek.

Also in jeopardy is the Chambre de l’assurance de dommages (ChAD), particularly since the report clearly wonders why claim adjusters are regulated by a distribution law and why insurer’s employees are subjected to dual oversight. The report affirms that the twofold oversight structure leads to a potential for conflict between the rules a firm seeks to impose on representatives acting on its behalf and the rules imposed by the chambers. “The insurer’s interest in imposing its own rules of conduct will be much greater in the case of an employee given the threat to its reputation that it incurs,” suggested the report. Further, according to international trends, guidelines respecting commercial practices will become increasingly important, which will likely lead to greater regulatory conflict, adds the report.

“I did not expect that by modernizing the legislation that they would propose turning back the clock 25 years, and reduce consumer protection,” said Maya Raic, the president and executive director of ChAD. “We were very surprised because the report implies that only a part of the industry, about half, should no longer be certified, should no longer follow a code of ethics, should be obliged to take professional development course, and worse would not be held responsible or accountable for the advice it gives to clients.”

Instead of curtailing ChAD’s oversight responsibilities, Raic will be proposing to the Ministry that the organization be responsible for overseeing not only representatives but also insurance firms. “It will be far easier and coherent to oversee them because we will ensure that their business practices also take into account ethical practices,” said Raic. 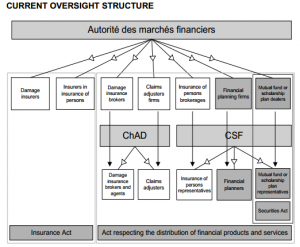 There is however consensus that the Ministry must put in place a flexible legal framework that will enable insurers to offer their products online. At present, neither the Act nor other legislation governing the financial sector specifically deal with online distribution of insurance. “The law at present does not foresee the possibility of selling insurance online,” noted Annick Demers, a regulatory compliance expert and counsel with Blake, Cassels & Graydon LLP in Montreal. “It was designed for face-to-face sales. I’m eagerly waiting to see how the government will address this reality, modify the regulatory regime to enable it, and put in place the necessary consumer protections.”

The report recommends adopting recommendations outlined by the Canadian Council of Insurance Regulators to deal with online purchases. Some of the Council’s key recommendations include: that suppliers be registered with the regulating authority, that online suppliers present to consumers with a summary of the information provided on a proposal form before concluding a contract, that suppliers provide consumers with appropriate advice, and that insurers establish secure, efficient systems to offer consumers the possibility of designating and changing beneficiaries by electronic means.

“We have received a lot of requests for advice over whether selling insurance online is legal or not,” said Lemaire, a lawyer with Langlois Kronstrőm Desjardins. “The law does not provide guidance if only to state that insurers have a general obligation to adopt sound business practices.”

Besides enhancing consumer protection in the event of fraud and recommending that industry representatives be involved in the decision-making process during compensation, the report proposes that insurers be held accountable for distributors who are not insurance professionals but who sell insurance products such as travel insurance. In short, such distributors would be deemed as mandatories of the insurer. That is a recommendation that will likely be positively viewed by insurers, according to Garellek. “With such a regulatory framework in place, it would give ammunition or power to insurers to have a closer oversight, a greater say on how their products get distributed,” said Garellek.

The report will now likely be the subject of heated debate, and that’s a good thing, said Lemaire. “There are two philosophies at play in the report – consumer protection and the desire to eliminate regulatory confusion,” said Lemaire. “The report is a tool for reflection that highlighted several problems with the current system, and everybody has an interest to consider the changes it is proposing.”