A Quebec shareholder advocacy group won yet another legal battle against one of Canada’s most powerful giants after it swayed the Quebec Court of Appeal that shareholders should have the right to ask to examine the financial statements of the corporation’s subsidiaries.

In a precedent-setting ruling, the appeal court held that section 157 of the Canada Business Corporations Act (Act) legally allows corporations to consolidate their financial statements, as recommended by the Canadian Institute of Chartered Accountants’ Handbook, as well as permits “curious and sophisticated” shareholders to have free access to the financial statements of a corporation’s operating segments.

“The courts cannot sterilize s. 157 under the pretext of establishing a more adequate balance between shareholders and management; that exercise was already undertaken by the federal legislator,” noted Justice Dalphond in a unanimous 15-page ruling.

The Movement for the Education and Defence of Shareholders (MEDS) sought to examine the financial statements of Power Corporation of Canada’s subsidiary Gesca Ltée and its subsidiaries by invoking s.157 of the Act. Gesca produces television programming, publishes specialty magazines and books, operates Internet sites, and holds a 100 per cent interest in seven daily newspapers in Quebec and Ontario, including Montreal’s La Presse. Yves Michaud, MEDS’ founder and an avowed separatist, wanted a peek at Gesca’s financial statements because he believed that the Desmarais family, which controls Power, financially bolstered Gesca and its subsidiaries to promote federalism.

Power turned down MEDS’ request, and argued before the courts that disclosing Gesca’s financial statements would leave at at a competitive disadvantage against competitors such as Quebecor Inc. who could use data against it. Power also pled that it was pointless to reveal such information as it did not have a significant impact on the value of its shares. Further, it argued that to keep all such information at its head office available for viewing by shareholders would be onerous.

In a ruling that marked the first time an appellate court in Canada interpreted s.157 of the Act, the Quebec Court of Appeal held that corporations operating under the auspices of the Act must keep at its head office a copy of the financial statements of each of its subsidiaries and other operating segments as well a copy of the each of the body corporate whose financial statements are consolidated within the statements of a corporation – and allow shareholder to examine these financial statements and make extracts free of charge. The appeal court held that the requirement applies even where the accounts of a direct and indirect subsidiary do not have a significant impact on the value of the parent corporation’s shares. 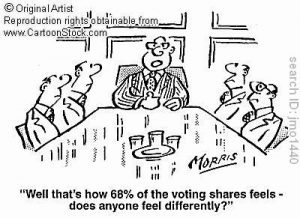 The appeal court also scoffed at the notion that managing such information would be burdensome, pointing out that in the digital era it would be “easy for a company to give access to such information through a computer.”

According to Guy Paquette, who represented MEDS, the judgment represents a major ruling in Canadian corporate law as it will lead to more transparent financial statements that all shareholders will now be able to peruse.

“Large institutional shareholders have always had more access to more financial information,” said Paquette. “With this ruling, shareholders – large and small – will have the right to request to examine the all of the financial statements of a company and its subsidiaries. The time for hide-and-seek is over. This ruling will be the leading case insofar as s.157 of the Act is concerned.”

In practical terms, Paquette says that investment fund managers, for example, will now be able to conduct far more extensive research than was ever the case before into a corporation’s state of financial affairs.

That will indeed be the case, says Denis Durand, a partner with Jarislowsky Fraser Ltd., a registered investment counseling firm that has earned a solid reputation for defending shareholder rights and promoting strong corporate governance.

“This ruling represents a progressive evolution towards the goal of more transparency,” said Durand, an investment counselor for the past three decades, the last two with Jarislowsky Fraser. “At times it has irked us that it was impossible to know exactly the financial state of some very important, wholly owned subsidiaries of a corporation.”

Ted Johnson, counsel to Power Corp., declined to comment on the case.  Power, however, has decided not to appeal the case before the nation’s highest court.

While MEDS obtained the right to ask to examine the financial statements of Gesca and its subsidiaries, it does not means that it will be granted. Under s.157.3 of the Act, a court may grant an order barring the right to examine financial statements if it is satisfied that such examination would be detrimental to the corporation or a subsidiary body corporate. The case has yet to be heard on the merits of the case, and a date has yet to be slated by Quebec Superior Court.

MEDS, through the determined leadership of Michaud, has achieved high-profile successes in the past. In 1996 he won a landmark court victory against two banks, forcing them to put his proposals on their proxies. Two years later, the National Bank of Canada agreed to his proposal to allow shareholders to vote for each individual director on the board. In 2000, he convinced banks to reveal auditor fees for non-audit work, something that is now a requirement for all companies.