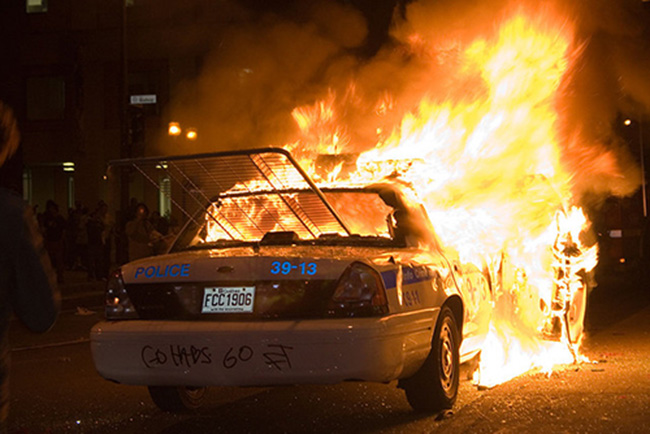 Rioters who damaged police cars after a Montreal hockey game can only be held liable for the specific damage they caused personally, and cannot be held responsible for damage caused by other rioters to the same vehicle, ruled the Supreme Court of Canada, capping off a week to forget for the City of Montreal.

In a 6-1 decision, the nation’s highest court provided guidance on when solidary liability attaches to wrongful acts under the Civil Code of Quebec, days after the city lost two major decisions dealing with pension matters before the Quebec Court of Appeal.

The riot, now part of Montreal’s infamous lore, took place on April 2008 after the Canadiens beat their arch rivals, the Boston Bruins, in the seventh game of the NHL playoff series. Nine police cars were set ablaze and destroyed and six others were damaged after festive celebrations turned into a riot as the evening progressed. Many of the incidents were caught on video, allowing police to determine what damage individual defendants caused to specific cars. All told, about 20 people were arrested.

The city sued the rioters, launching one civil action per vehicle, asking the courts to find them liable for the value of each vehicle they participated in destroying. In each action, it grouped together all the identified rioters who had done damage to the vehicle or vehicles and sought to have the defendants in each case held solidarily liable for the whole of the damage done to the specific patrol car and to its equipment, regardless of the nature or seriousness of the wrongful act each of them had committed.

In 2014, Court of Québec Judge Sylvain Coutlée ordered each of the rioters to pay the city the cost for the specific damage they caused to the vehicles, plus punitive damages. But Judge Coutlée declined to find the rioters in each action solidarily liable. The Quebec Court of Appeal upheld the decision, finding that the application of articles 1480 and 1526 of the Civil Code, which provides for solidarity in cases of extracontractual fault, did not apply to the facts of these cases.

Under the Civil Code, solidarity is not presumed. A person who does something wrong will only have to pay for the exact harm that he causes. But there are two exceptions. Articles 1480 and 1526 of the Civil Code set out the circumstances in which there is a solidary obligation to make reparation for injury caused by an extracontractual fault.

Making matters even more complicated, two conditions must be met for article 1480 to apply: It must be impossible to determine which person actually caused the injury, and there must have been either “joint participation in a wrongful act which has resulted in injury” or “separate faults each of which may have caused the injury”. In short, the two conditions that must be met are cumulative.

“In determining whether there was a common intention, a court should avoid defining the wrongful act so broadly that the common intention no longer bears any relation to reality,” noted SCC Justice Clément Gascon. “The specific circumstances of the cases at issue in this appeal do not show that the rioters acted with a common intention, either express or tacit.”

Natalie Gauvin of Montreal Legal Aid told The Lawyer’s Daily that the SCC’s ruling “clearly states the criteria applicable to the opening up of solidarity in the context of an event involving several faults. This decision is of great importance for the application of solidarity in the area of Quebec civil liability.”