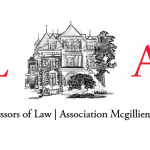 Almost a year to the day when McGill law professors formally launched proceedings to become recognized as an exclusive bargaining unit for faculty members, the longer than expected legal battle culminated with an unequivocal victory after the Quebec labour board issued granted certification, a first for professors in the university’s 200-year history.

The “slam dunk” decision by the Quebec Administrative Labour Tribunal sets the stage for changes to the labour landscape at McGill, with the new union intending to flex its muscles over a growing inclination towards centralization at the university, safeguard the collegial governance at the faculty level and negotiate a collective agreement that will provide better working conditions and security, according to leaders of the Association of McGill Law Professors (AMPL).

END_OF_DOCUMENT_TOKEN_TO_BE_REPLACED

McGill law professors, hoping to gain greater faculty autonomy while seeking the security of a collective bargaining framework and a collective agreement, are attempting to unionize at the faculty level, a first for professors in the university’s 200-year history.

The Association of McGill Professors of Law (AMPL) petitioned the Quebec Administrative Labour Tribunal to be recognized under the Quebec Labour Code in late November 2021 shortly after the university adopted a controversial COVID-19 vaccination policy, a position that proved to be the “bale of hay that broke the camel’s back,” said Evan Fox-Decent, AMPL’s interim president. A supermajority of the 51 McGill law professors have signed membership cards to allow the AMPL to act as their exclusive bargaining agent. The overwhelming majority of Canadian professors are unionized, with less than a handful not represented by a certified bargaining unit.

“The university is becoming more McGill incorporated than McGill University in recent years,” remarked Fox-Decent, Canada Research Chair in Cosmopolitan Law and Justice. “What really drove the point home to us about how precarious our situation is, was when we were told we were going back to teach in fall, of course we were under a new wave of COVID-19 that was starting up. That was as much as anything what put people on edge and made the majority of the faculty think that we just had to sort of take control over our own house.”