An ambitious international effort calling for a coordinated approach to rewrite global tax rules over profit shifting risks being undermined by the number of growing countries that are unilaterally introducing significant tax reforms, warn tax experts.

The Paris-based Organisation for Economic Co-operation and Development (OECD), backed by the G20 Finance Ministers, proposed in July 2013 a sweeping series of proposals that take aim at aggressive international tax planning by multinational companies in the wake of intense political scrutiny and public outcry over the likes of Apple Inc., Google Inc. and Starbucks moving billions of profits out of higher-tax countries into low or no-tax jurisdictions.

The plan, known as Base Erosion Profit Shifting (BEPS), lists 15 specific actions that will attempt to tackle tax challenges of the digital economy, establish coherent rules for corporate income taxation, prevent tax treaty abuse, increase transparency by taxpayers, and amend the world’s 3,000 bilateral tax treaties through a multilateral instrument. This past February, the OECD and G20 countries agreed to three key elements that will enable implementation of the BEPS project: a mandate to launch negotiations on a multilateral instrument to streamline implementation of tax treaty-related BEPS measures, an implementation package for country-by-country reporting in 2016, and criteria to assess whether preferential treatment regimes for intellectual property – or the so-called patent boxes – are harmful or not. “Most of this has been derived from public reaction over what’s happening with large corporations and their use of international tax rules,” said Angeline Zioulas, CPA, CA, national transfer pricing leader with MNP LLP in Vancouver. “But it’s good tax planning. Most of these companies are public and need to maximize their shareholder wealth. Coming up with efficient tax planning is a good thing overall, and it’s good for shareholders.” 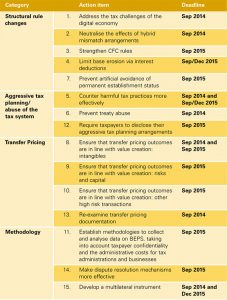 The timetable for implementing the bold and large-scale action plan is set for December 2015, an ambitious schedule that many say is impractical and unattainable. “The BEPS initiative is seeking a degree of coordination that has been unprecedented,” noted Claire Kennedy, a tax lawyer who as an officer of the International Bar Association’s (IBA) Taxes Committee is helping the organization draft responses to the BEPS project. “I am not sure that the OECD is going to succeed in everything that they are aiming to achieve because the project is very ambitious and subject to a very short and unrealistic deadline of what amounts to a reworking of the entire international tax framework.”

The combination of tight deadlines and mounting political and public pressure to address gaps and mismatches in tax rules does not lend itself to an informed and thorough analysis nor a careful balancing of policy objectives, adds Kennedy, a partner with Bennett Jones LLP in Toronto.

On top of that, many countries are not waiting for the OECD to rebuild the international tax system. Instead these countries are using the attention and publicity around the BEPS initiative to adopt interim measures to protect their respective tax bases. Many, for instance, are introducing or enacting anti-avoidance rules. In the lead up to the national election in May, the United Kingdom released the diverted profits tax provisions within its draft Finance Bill 2015. The diverted profits tax is a new tax, charged at 25 per cent on profits that are considered to be “artificially diverted” from the UK. Another European country, Austria, promulgated a rule that denies a deduction for interest and royalties paid to related parties in low-tax jurisdictions. Australia, besides enforcing its existing anti-avoidance rules, released stricter debt funding rules and new transfer pricing guidelines for the practice of assigning prices to goods and services sold between controlled or related legal entities within an enterprise.

“The real tension with the BEPS project and with countries is that fiscal policy is a real critical part of any country’s sovereignty, and countries want to be seen as in their own driver’s seat in terms of developing their own fiscal policy,” said Christopher Steeves, leader of the tax group for Fasken Martineau DuMoulin LLP. “By introducing legislation to show that they are being responsive and reactive rather than waiting for the BEPS project to be completed, that will play with voters.”

Canada nearly joined the list of growing countries acting unilaterally. The Finance Department published a consultation paper on treaty shopping, or the practice of structuring a multinational business to take advantage of more favorable tax treaties available in certain jurisdictions, with the aim of introducing its own plan for a domestic treaty override to combat treaty shopping. “Adopting measures that prevent treaty shopping, as some other countries have done, would protect the integrity of Canada’s tax treaties,” said the consultation paper. But last August, the federal government had a change of heart and quietly shelved its domestic initiative to wait for the BEPS proposals under Action 6 on anti-treaty abuse. 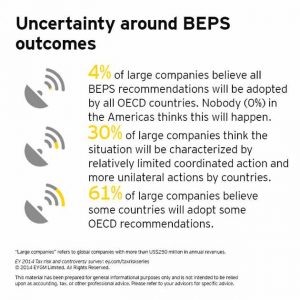 At the same time that countries are tightening tax rules and using aggressive audit tactics such as the Australian Tax Office which is increasingly scrutinizing multinationals through the use of a new special task force or Mexico which is contemplating applying BEPS concepts to previous transactions involving business restructurings, they are also forging ahead and providing tax incentives for multinationals to invest in their jurisdictions, observed Steeves. Patent boxes are a case in point. Designed to attract and nurture research and development companies, patent boxes provide a lower tax rate on profits from work related to patents. “A preferential regime is useful in supporting growth and innovation in a country if it attracts real activity,” said the OECD. “It is not so if it merely encourages companies to shift profits from the location in which the value was actually created to another location where they may be taxed at a lower rate.” Patent boxes have become a sticky point for negotiators involved in the BEPS project. Many countries and organizations like the European Commission view patent boxes as “harmful tax competition,” but the handful of countries that offer it like Britain, Cyprus, and the Netherlands, are resisting pressure from other nations, asserting that it encourages innovation and high-value jobs in research.

“Countries don’t want their tax base eroded but yet they are willing to compete with one another with these various tax plans designed to encourage a company to leave its home jurisdiction and take part of their economy,” said Steeves. “That tension will be a roadblock in some ways for BEPS.”

While governments are supporting various aspects of the BEPS initiative and proceeding on the other hand with preferential tax regimes for certain kinds of income, Kennedy does not believe that those conflicting positions will “per se” sound the death knell of the OECD’s project. “There is a serious question about how BEPS would get implemented in any event,” said Kennedy. “One of the BEPS action items is a multilateral instrument to effect these changes, but I think that is going to be very difficult to pull off given the scope of the changes we are talking about. Almost as a necessity, if there are going to be changes of the nature the OECD is talking about, it’s going to take changes at an individual country legislative level and not one full swoop with this multilateral instrument.”

Business, not surprisingly, are caught in the middle, and are very concerned, said Steeves. When developing cross-border structures, they are asking tax experts such as Steeves to evaluate the proposals and the impact BEPS might have on what they are doing. Given that there is a lot of uncertainty at the moment, Kennedy suggests that business think carefully about their international tax planning. “Business can live with sort of clear rules and regimes,” said Kennedy. “They may be favourable or unfavourable but if they are certain then you can make decisions about investments and business growth.” The uncertainty also makes it challenging for tax advisors, said Zioulas. “It’s a confusing topic,” said Zioulas. “From someone who is living it, and it’s going to affect me and what I do everyday, I absolutely have no idea what’s going to happen. So for us in Canada, it’s wait and see what is going to happen. The best I can do for clients is to say these are things that you need to be aware of when you are conducting your business operations.”