The practice of law is under duress. Legal service innovations driven by digitalization and globalization are propelling seismic change. So too is the emergence of the sharing economy model which has taken the world by storm. Novel ways of delivering new products and services are seemingly materializing daily to satisfy increasingly demanding and fickle consumers. The rapidly evolving landscape is putting a strain on traditional business models, while governments and regulatory authorities are scrambling to keep up with the dizzying pace of change. But with change comes challenges – and opportunities – for legal service providers and legal protection insurers alike, all of which was  explored at a conference held in Montreal recently by the International Association of Legal Protection (RIAD).


The sharing economy has been likened to a Pandora’s box, opening a world of new opportunities while engendering much legal confusion and uncertainty. 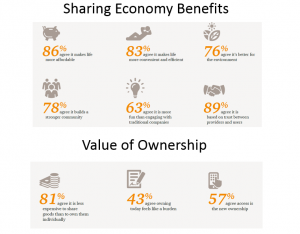 A wave of peer-to-peer, access-driven businesses has become a disruptive force in a slew of industries, ranging from travel to car rentals to consumer goods to employment to finance. Even insurance has been touched. And the disruption may be long-term if the new businesses change consumers’ attitudes towards ownership. A recent PwC study revealed that 81 percent of people familiar with the sharing economy believed that it is less expensive to share goods than to own them individually. Another 57 percent asserted that access is the new ownership.

As it stands, PwC predicts the sharing economy will grow at over a staggering 30 percent rate per year, with growth broad spread across the five most prominent sectors – collaborative finance, peer-to-peer accommodation, peer-to-peer transportation, on-demand household services, and on-demand professional services. 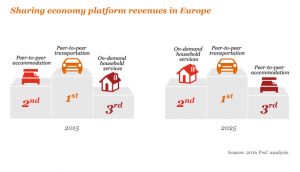 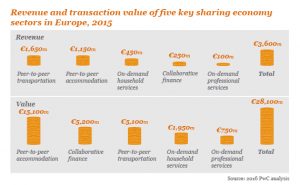 “The sharing economy and the new business models in it are fundamentally transforming how we think about business, how we deliver mobility, how we earn income and what we think about in terms of employment,” asserted Rinne, adding that three kinds of things can be shared – space, stuff and skills.

The sharing economy was made possible and is empowered by a combination of the internet, big data analytics, low-cost cloud storage, the prevalence of social media and the widespread use of mobile devices.

But at its heart, the sharing economy is driven by three principles: resource utilization, decentralization and relationships, said Rinne. Resource utilization basically means “how much you use the things you have.” Cars sit parked and unused on average 23 hours a day. “It’s incredibly inefficient but it is also really expensive to maintain structures like this,” pointed out Rinne.

The second principle behind the sharing economy is decentralization. Before the onset of the sharing economy companies held centralized inventory that was rented or sold. But thanks to new technologies, decentralized inventory has taken hold. Companies like Airbnb and Uber and BlaBlaCar do not have or worry about the infrastructure that accompanies centralized inventory. Airbnb does not own any hotels, and yet has more rooms to rent than Hilton or the Marriott. BlaBlaCar transports more people than the entire Eurostar train network every day while Uber boasts that it provided 140 million car rides in 53 countries and more than 250 cities without owning any cars or employing full-time drivers.

The third anchor is relationships, said Rinne, noting that the vast majority of the sharing economy requires some kind of human interaction.

This new way of doing business has spawned legal and regulatory uncertainty. “This is not surprising because when you look at the rules that are in place we see that they come from an ownership era, without smartphones,” observed Rinne. “So the rules in the books in many places for the most part couldn’t fathom the kinds of business models that are possible today. It doesn’t make them bad rules. It simply means that they are outdated, and there is an enormous opportunity in updating them. We’re in the early stages of an exciting and challenging process of policy reform. Figuring out how to regulate for innovation is nothing new. Technology has always outpaced the law.” 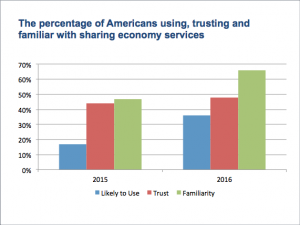 The danger rests with regulatory authorities introducing regulations to completely eschew risk, said Jean-Nicholas Guillemette, the general manager of Uber Quebec. Trust is central to the sharing economy, and is the lubricant of this entire space. Nearly all sharing companies establish trust through crowdsourcing, with online peer reviews at the heart of the sharing economy. Before consumers agree to rent an Airbnb room, use an Uber driver, or use a TaskRabbit handyman, they see what others who have used the service have to say. Indeed, new platforms like Copenhagen-based start-up Deemly have surfaced that enable users to leverage their personal trustworthiness online, underscoring that shift underway from institutional trust to peer trust. “If we regulate to avoid incidents we will kill the sharing economy,” said Guillemette. “We need to understand the difference between institutional trust and peer trust, and that is a huge change in the way that regulations work right now. We need to be careful not to create too much regulation.”

Legal protection insurers are in an enviable position, according to experts. The insurance sector has the potential of becoming one of the most significant factors determining the growth of the sharing economy and how it grows, noted Rinne. That’s because the number one thing that sharing economies want is an insurance product that works for them. Some insurance companies are seizing the opportunity by introducing innovative products such as Metromile, a San Francisco-based car insurance start-up that offers pay-per-mile insurance coverage. Or Germany’s Friendsurance, peer-to-peer insurtech which allows groups of people to pool insurance premiums together and offers an annual no-claims reward. But that is just the tip of the iceberg. “At a more fundamentally disruptive level there are platforms that are emerging that challenge in how we think about insurance itself,” said Rinne. That would certainly be the case with Trov, an on-demand insurance platform that lets users buy insurance for specific products for a specific amount of time. 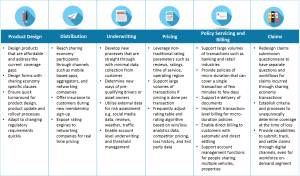 The sharing economy will compel insurers, and legal protection insurers particularly, to re-examine their policies, said Simon Warr , RIAD vice-president and underwriting manager with AMTrust International. “Everything is insurable,” observed War. “There is no such thing as bad risk. Just a bad premium.

One of the things we have to maintain is the relevance of our policies. If we provide exactly the same policy we provide in twenty year’s time, a lot of the coverage will become irrelevant so people will stop buying it. The disruption is an opportunity.”

Airbnb is a good example. The firm is headquartered in San Francisco, has offices around the world, is present in 34,000 cities, some of which allow home sharing and short-term rentals. “There is an enormous opportunity here but it requires you to rethink your cross-border coverage and limitations so that you can take advantage of companies like this that are growing like wildfire and likely to become integrated into our economies over time,” said Rinne.

There are just as many questions as opportunities for legal protection insurers. Here are a few of them: