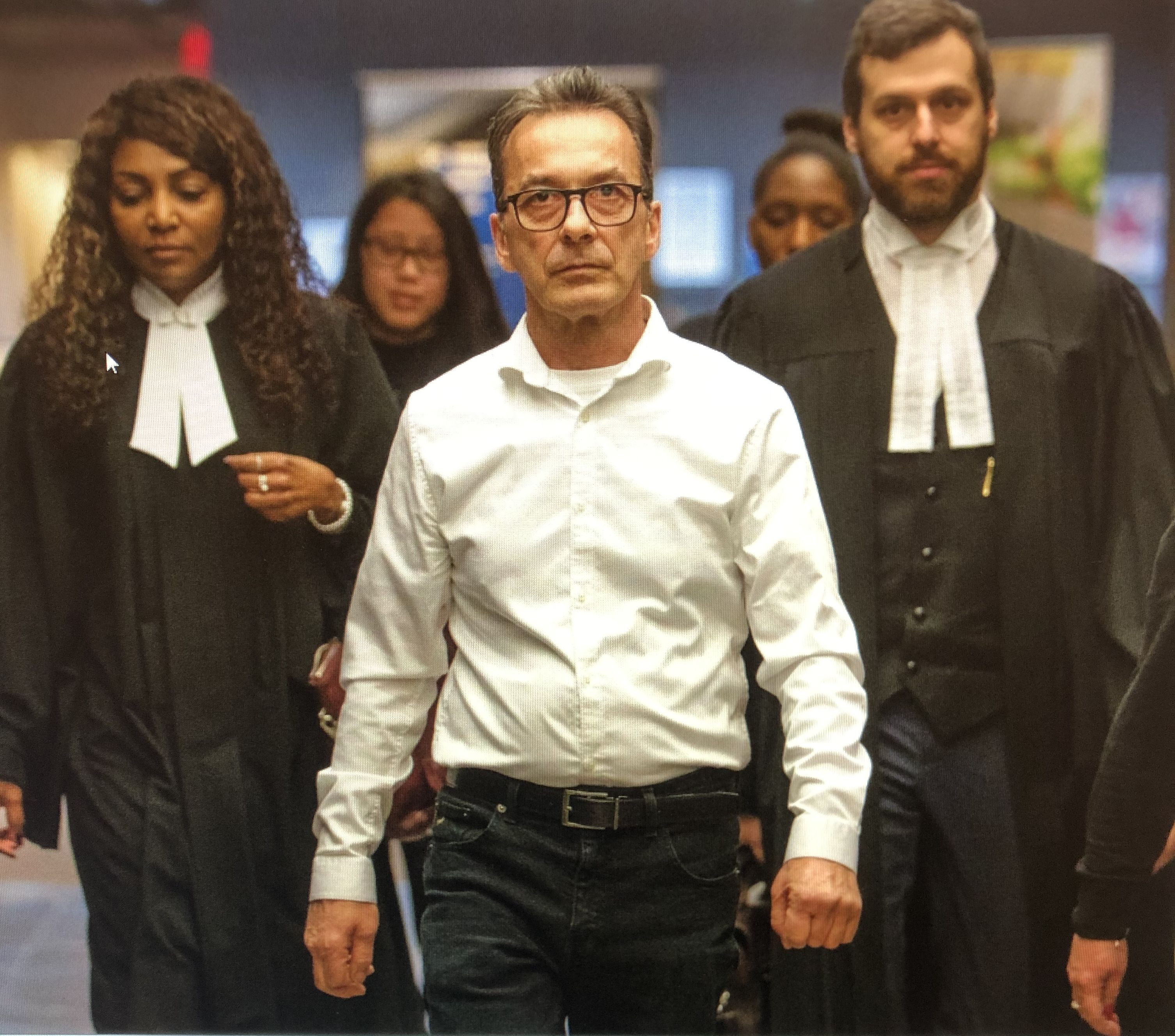 A Montreal man who was found guilty of manslaughter for killing his ailing wife in what he argued was a compassionate killing was denied parole even though he has served a sixth of his two-year sentence, minus a day.

The Commission québécoise des libérations conditionnelles (CQLC) will spell out the reasons for refusing Cadotte’s parole in the coming days. He will be able to request another parole in the next few months.

The Cadotte case drew province-wide attention over the fate of caregivers and Quebec’s health system in the face of an aging population. But Quebec Superior Justice Hélène Di Salvo held during the sentencing that the killing of a person must be denounced regardless of the motivation, even it was committed in the “name of compassion.”

“If we can understand the situation that Mr. Cadotte found himself in that led him to commit that fateful act, it remains that under law, that act cannot be excused,” said Justice Di Salvo in a case she depicted as a heart wrenching, tragic love story. “The law, as it now exists, does not endorse these acts, even under the circumstances which Mr. Cadotte faced for years.”

Michel Cadotte, 57, admitted in court that he suffocated to death Jocelyne Lizotte, his 60-year old wife of 19 years who suffered from early-onset Alzheimer’s disease for more than a decade, beginning in 2006. Lizotte, having seen her mom ravaged by Alzheimer’s, told Cadotte that she never wanted to be hospitalized. She preferred to die instead. But in 2013, Cadotte had no choice to break his promise. By the end, Lizotte no longer recognized anybody, could no longer communicate, was extremely agitated, and needed to be strapped 24 hours a day. On February 2016, Cadotte submitted a request for medical aid in dying on his wife’s behalf but was turned down because she could not consent and because she was not at the end of life.

Mentally exhausted, suffering from major depression, financially stretched, and angry over what he perceived to be a lack of care at the long-term care facility, Cadotte “reached his breaking point,” on February 20, 2017, as the judge put it. He fed his wife while weeping, and then tried to place her head properly on the pillow, unsuccessfully. Cadotte went for a smoke, returned to her room and then pressed a pillow over her head until she stopped breathing. He told a nurse, and then sat next to his wife on her bed, waiting for police to come to arrest him. “I snapped,” he posted on Facebook. He was charged with second-degree murder but on February 2019, after a month-long trial, Cadotte was found guilty of manslaughter.

“I think the sentence is a bit harsh but I nevertheless deserve it because I did something that was unacceptable,” Cadotte told me. “I could have left (after killing her) and nobody would have known but I would have never been able to live with it. I realized what I did, and decided to face the situation.”

The Crown asked for a sentence of eight years while Cadotte sought six-to-eight months imprisonment.

But heeding guidance from the Quebec Court of Appeal’s decision in R. c. Vallée 2017, QCCA 666, Justice Di Salvo concluded that Cadotte’s action was akin to a quasi-murder rather than a quasi-accident. In Vallée, the appeal court held that sentences in manslaughter cases that are akin to a quasi-murder can range from nine years imprisonment to life in prison, with the norm being 10-to-15 years. In manslaughter cases that are more analogous to quasi-accidents, prison sentences are usually less than five years.

In a decision criminal lawyers described as comprehensive, just, thoughtful and one that underscored the bind the criminal justice system and the courts face in the absence of clear-cut legislation and government inaction, Justice Di Salvo held that pressing a pillow on the victim for several minutes is far from a quasi-accident, particularly since Cadotte’s intention, “even in his altered state,” was to put an end to his wife’s suffering.

“One cannot commit these actions to someone who is ill, vulnerable, dependent and incapable of expressing their will, even if they’ve expressed a desire to die in the past,” said Justice Di Salvo in R. c. Cadotte 2019 QCCS 1987 rendered on May 28th. “However, if the Court can draw from existing sentencing ranges, it should not do so blindly or automatically.”

She added that the determination of a just and appropriate sentence is a highly individualized exercise, and “the circumstances in this case are unique” given that it deals with social issues such as medical aid in dying, long-term care, caregivers, and Alzheimer’s disease – all of which propelled the trial of Michel Cadotte, “against his will,” to the forefront of massive media attention and much legal and social debate. “The trial, the verdict and the sentence will not provide a solution to all of these social issues,” added Justice Di Salvo.

The distinction that has been drawn in manslaughter cases between quasi-murder and quasi-accidents is very disappointing, said Quebec City criminal lawyer Julien Grégoire. It is a fictitious and imaginary distinction created by jurisprudence. “Indeed, it is either a murder or it is not,” said Grégoire. “The grey zone between the two is, in law, immeasurably irreconcilable. Because third degree does not exist in the Criminal Code judges have taken it upon themselves to come up with a creative fiction that for sentencing purposes amounts to a quasi-murder.”

Elfriede Duclervil, a criminal lawyer who defended Cadotte, concurs, to a point. Duclervil agrees that it is a “fictive distinction” created by jurisprudence for sentencing purposes in manslaughter cases. But while Justice Di Salvo “described it as a quasi-murder she took into account the extenuating circumstances to come to the conclusion that Cadotte should be handed a sentence of two years less a day,” said Duclervil, who works for Montreal’s Legal Aid. “In this sense, she not only sentenced the act, but she sentenced the individual and took into account the circumstances of this act.”

It appears that Justice Di Salvo in her decision is “putting the ball” back to legislator’s court, said Montreal criminal lawyer Jean-Claude Hébert, Ad.E, who was part of a panel of legal experts commissioned by the Quebec government to examine the legal feasibility of a comprehensive “dying with dignity” law before Quebec’s Act Respecting End-of-Life Care (Act) was enacted in 2014. At the time, there was no consensus as to whether loved ones could follow through on the wishes expressed by someone afflicted by a degenerative disease, said Hébert. As things stand in Quebec, only a lucid person can give their consent to end-of-life care.

“Clearly, if medical aid in dying was available, the case would have ended in tranquility for everyone,” noted Hébert, who found Justice Di Salvo’s reasons to be solid, well-anchored in law and will likely be upheld by the Quebec Court of Appeal if the Crown appeals. “But in the absence of legislation, the criminal justice had no choice but to intervene and punish someone who could have been a recognized representative of the sick person for dying with dignity. The justice system has other things to do than to settle the health issues of an aging population.”

Grégoire, while lauding the Justice Di Salvo’s broad, just and thorough decision, also took a potshot at the Quebec government for failing to adequately address both the needs of caretakers and the aging population.

“No doubt, she rightfully considered the current principles of law and drew from the circumstances, both aggravating and mitigating, of this very special case with parsimony,” remarked Grégoire. But the “current Quebec government seems to be more preoccupied by the wearing of the veil in the public sector or in schools than the aging of the population, the distress of caretakers and the inherent limitations of the Act.”

Duclervil echoed those sentiments. “My biggest disappointment is for the past three years we’ve been talking about it, nothing has been done so far,” said Duclervil. “Michel Cadotte is not alone. We are facing a huge problem in our society, and we need to face it head-on. The time to act is not now, it is yesterday.”